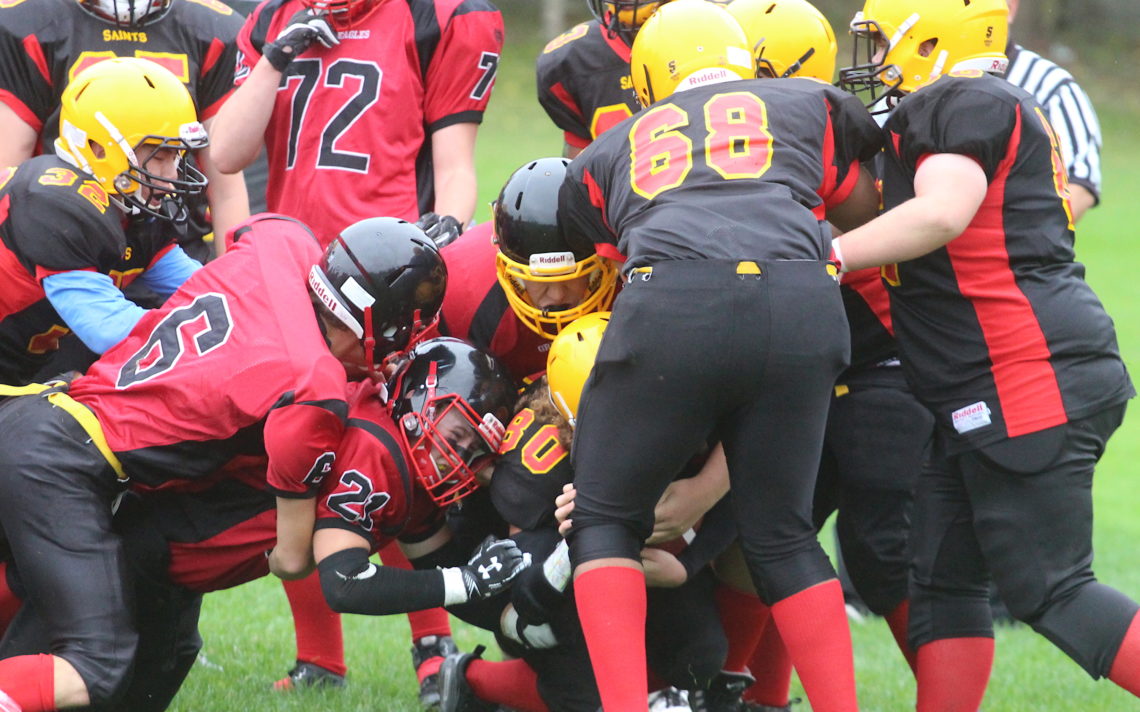 Grimsby (2-1) built a big league early in the second quarter before Collegiate head coach Nathan Greene forfeited the game because of safety issues after several of his offensive players left the game with injuries.

After winning the Tier 2 title in 2017, Grimsby played one year at the Tier 1 level before deciding to return to the lower loop.

“I think it was an easy decision,” Grimsby head coach Zack Silverthorne said. “Yes, you want to play up there, but until you can get a junior program it doesn’t seem to make a lot of sense.

“We can’t get enough of the young kids to stick around and we are way under-coached.” 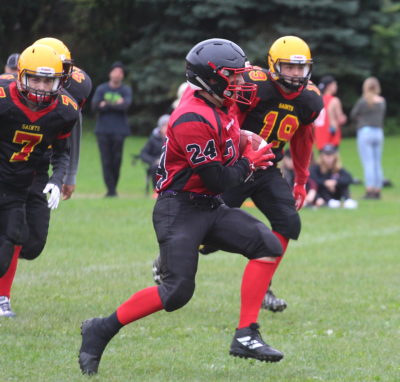 Silverthorne is thankful he has Dave Thiessen, the Niagara Regional Police liaison officer for Beamsville, Grimsby and Blessed Trinity, helping out.

“If I didn’t have him, I don’t know how we would do it,” said Silverthorne, who is also helped out by Greg Aloian.

“We try to go Mondays all offence and Tuesdays all defence because we are under 35 players now,” he said. “We try to make them all football players as opposed to a positional player. It has worked because we seem to be tough and we seem to be able to handle physicality and adversity.”

Silverthorne knows that he can play inexperienced football players but they have to know how to take a hit.

“We find every year that we get 10 or 12 who have never played and they want to try,” he said. “Every year it is right from scratch and we can’t hand out a playbook.”

The playbook is then based on who has come out that year for the football team.

Silverthorne’s goal is to return to Tier 1 football, but he feels that is impossible unless there’s also a junior program at the school.

“Eden has a junior team and I think they are going in the right direction,” he said.

Silverthorne, who has coached football a long time including a long run of success at South Lincoln, is a big believer in the importance of a high school having a football squad.

“They wear their jerseys in the hall on game days, parents and alumni come to watch,” he said. “It’s on the announcements and everyone cheers. And then they go to BP Sports, they see their picture on the internet and they get a shoutout because they ran for so many yards and scored a few touchdowns.

“It makes them feel really good.”

It is also a great sport for teaching and learning life lessons.

“It’s about 12 guys coming together to do a job, accountability, and coming to practice when you don’t really want to,” Silverthorne said.

The visiting Centennial Cougars pushed their NRHSAA Tier 2 football record to 3-0 with a 21-0 victory over the Eden Flyers (1-2).

Garvin Leavens scored a pair of one-yard rushing majors to pace the Cougars and Eli Taylor added a 10-yard TD run. Jackson Collin had an interception for the Cougars and Brian Mauvais had an excellent game at defensive back.

“There were lots of penalties on offence by us,” Centennial head coach Dom Nero said. “We still need to fix things in that area.”

For Eden, Stuart Huebert and Sam Lastewka had strong games and first-time defensive starter Joe Accete broke up a few pass plays with his athleticism.

“I am much happier with our overall effort and defensive and special teams execution,” Eden head coach Jeff Webster said. “Our tackling on both is solid, but we need to maintain our lanes and leverage a little better.”

On offence, he feels a change at quarterback and a few receiver positions are slowing his squad’s development.

“We have a lot of work to do in terms of execution and understanding,” Webster said. “We make all the mistakes you would expect from a young and inexperienced team.”

Webster was impressed with the play of the visitors.

“Centennial played a solid game and we were not able to capitalize on their few mistakes. They have a number of outstanding players, most notably No, 22 (Garvin Leavens).”

Mick and Angelo’s/Johnny Rocco’s/Cracker Jack’s Player of the Game: Grimsby’s Simon O’Brien with TD runs of one, one and 15 yards.