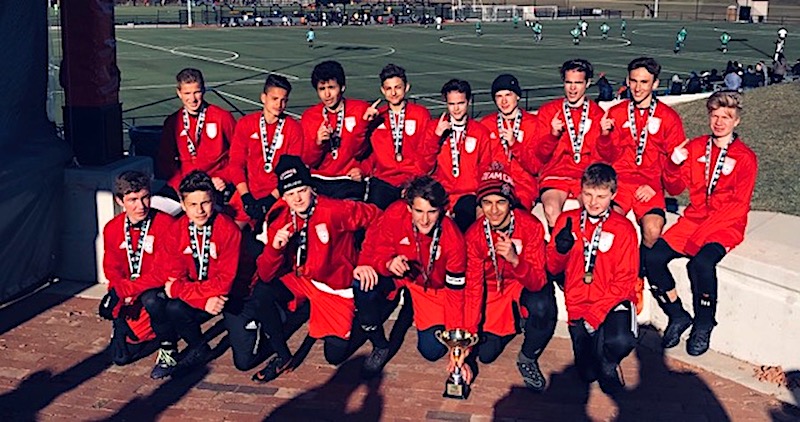 Great start to the season

The Niagara Regional Soccer Program under-15 boys went 5-0 to capture the 2018 First on the Turf Tournament in Guelph.

“The boys were very disciplined, organized and played with tremendous commitment,” coach Lee Burrows said. “It was a great start to the season.”

Niagara are coming off a memorable season which saw them capture the Golden Horseshoe Regional League title and Cup championship before finishing third at the Ontario Regional Championships in Guelph last October.

According to Burrows, the organization’s philosophy has always been to let athletes be athletes and teach them how to play the game correctly.

“We have a wide variety of multisport athletes who play their sports at the highest level and we encourage and respect that,” Burrows said.

At the tournament, Niagara beat Milton 5-0, Guelph 5-0, Cambridge United 2-1, London Whitecaps 2-1 before defeating Burlington OPDL 2-1 in the final. Burlington play in the Ontario Player Development League which is the only pathway to the provincial program.

“The majority of kids in the OPDL are soccer-only athletes,” Burrows said. “They train at least three times a week year round. The cost to play at that level is at least five times what our children pay. This goes against our belief of letting athletes be athletes because we absolutely know better.

“This group of kids and their parents understand more fully what it takes to be successful in sport and know that the multisport athlete will have the advantage as they mature through their sport.  We don’t make them chose, we let them chose, and they will when the time is right for them. We just teach them how to play the game of soccer the correct way without the need to add sizzle to inflate costs. We keep it real and they enjoy the game and the success they achieve.”

The St. Catharines Spartans are still looking for their first win of the season after dropping a pair of games this weekend.

The Spartans, now 0-5 in Ontario Lacrosse Association junior B play, are in Windsor Saturday.

St. Catharines fell behind 6-2 after one versus Six Nations and trailed 10-4 after two.

The teams combined for 131 minutes in penalties.

The Spartans rallied from a 6-3 deficit after two and came up just short versus Elora.

Kirchmayer and Adam Aquanno had two each for St. Catharines while Peyton McIntosh and LeClair added singles.