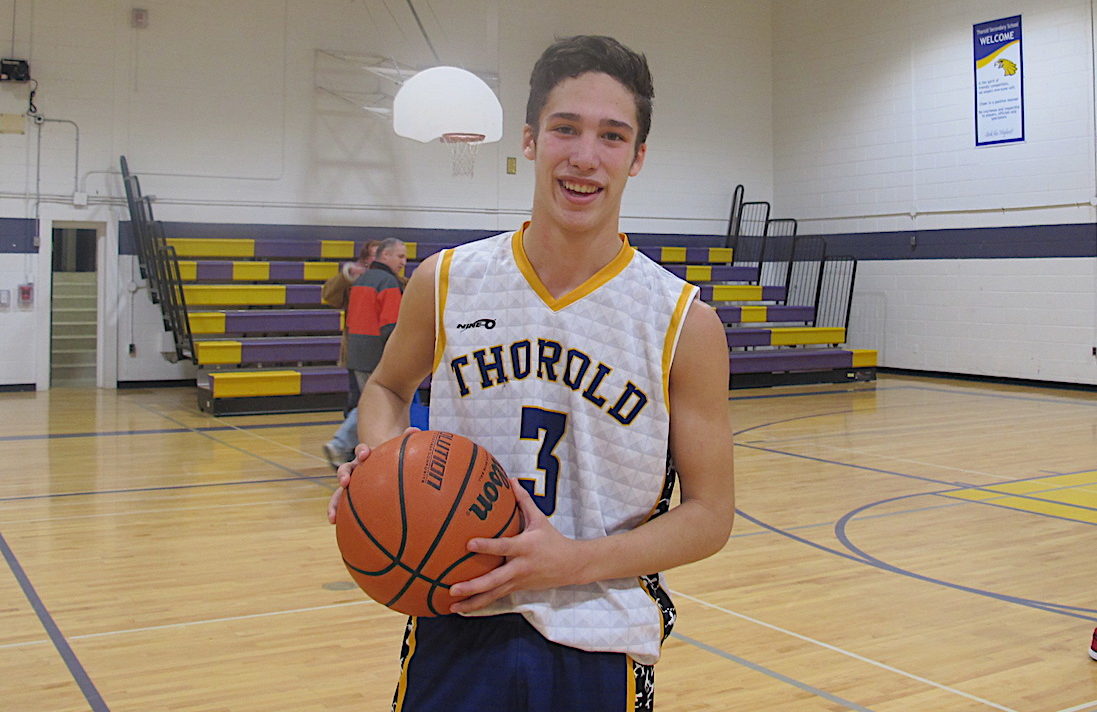 Devon Maltby got hot at the right time for the Thorold Golden Eagles.

The 16-year-old, Grade 11 student poured in 22 points to pace the Golden Eagles past the St. Catharines Collegiate Saints 81-49 in a District School Board of Niagara Zone 4 senior boys AA basketball semifinal playoff game at TSS Tuesday.

The Golden Eagles will host the Eden Flyers Thursday at 4:30 p.m. for the zone 4 title and chance to take on the Niagara Catholic Athletic Association champion for the right to advance to the Southern Ontario Secondary School Association (SOSSA) playdowns.

Maltby chipped in 10 points in the first half as the Golden Eagles built a 38-21 lead at intermission, then added 12 in the second half as Thorold increased their lead to 64-29 after three.

“It’s always very enjoyable when you’re on and you can get a lead like that,” Maltby said. “To win so easily is pretty comforting and helps for the upcoming game.”

Maltby didn’t start the game but came off the bench and quickly provided an offensive spark.

“It all depends on how it’s going that game, I could be in a scoring position or if not, I’m a point guard and I pass the ball a lot and try and get assists,” he said, when asked for his role on the team.

Maltby, who plays travel for the Welland Warriors, is in his first full season of season at the senior level after getting his feet wet last year with a couple of games when he was called up from junior.

“It’s very difficult. It was very hard at the start of the season to going from much smaller kids to much bigger kids,” he said.

Thorold coach Marc Dupont said Maltby has worked his way into the lineup on a veteran squad.

“It was kind of interesting because we have four or five Grade 12 kids and he started on the bench but he’s kind of worked his way into a role,” said Dupont, who coaches with Jon Kwiatkowski. “Whenever we ask him to come off the bench and play his heart out, he does. He’s learned through the season what the expectations are, and as you can see today, he’s not only reached those expectations, he’s gone beyond them.”

Dupont didn’t mind Maltby shooting so much Tuesday since he had the hot hand.

“We would like to see a few more passes at times, but the bottom line is it’s a playoff game and we want to keep playing on and we needed kids to make shots and he did. For a guy who is 5-foot-10, he can really get up there and he can find his shots all over the court.”

Dupont liked the way the Golden Eagles didn’t stray from the original game plan even when Collegiate hit a few shots to take an early lead.

“They started off really hot and we didn’t panic,” Dupont said. “We had a game plan and stuck to the game plan and what we’ve been working on and over time we just wore them down and started making shots.”

The Flyers have defeated the Golden Eagles in all three previous meetings this season, but Maltby is confident the fourth time may be the charm.

“I wouldn’t say we’ll be scared or anything, we just have to work as hard as we have all year and I feel as though we can pull off a win.”

Up next: The Golden Eagles host the Eden Flyers Thursday at 4:30 p.m. for the zone 4 title.