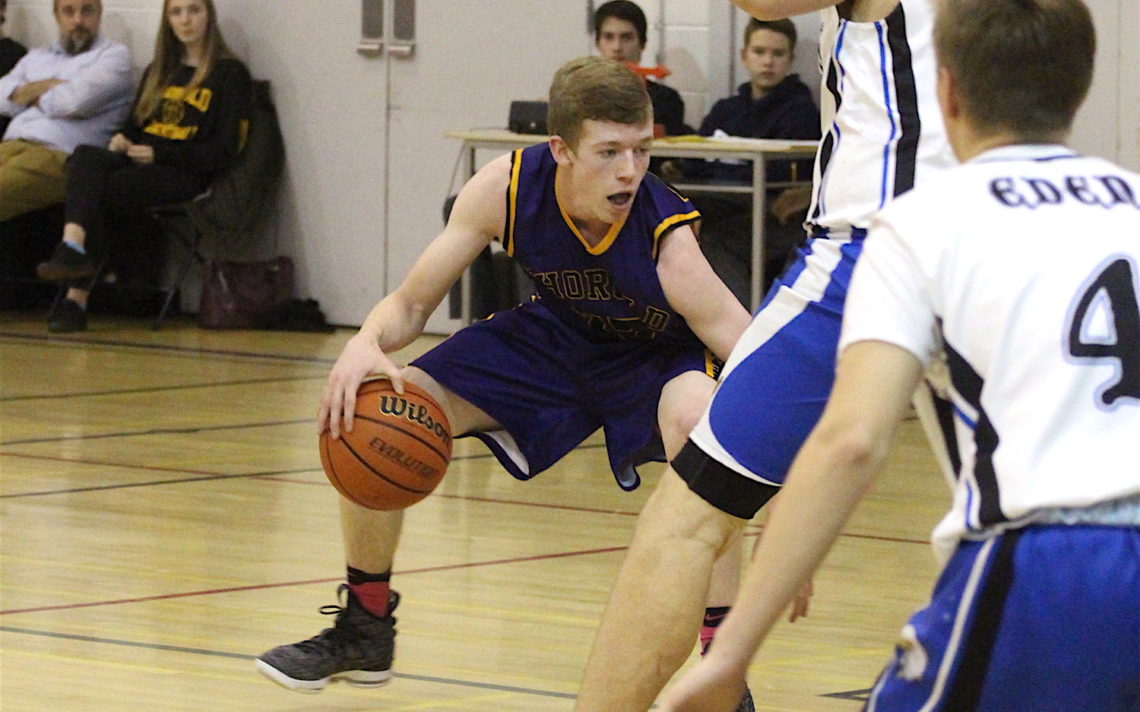 Devon Maltby was anything but cocky heading into his first season of senior basketball with the Thorold Golden Eagles.

“It was kind of scary going into it but it hasn’t really been too bad,” the 16-year-old said. “We came out much better than expected.The first game wasn’t amazing but everything after that has been very good.

“We have been pretty powerful so far.”

The 5-foot-9 guard. who scored a game-high 18 points in a 64-44 victory over the Eden Flyers Monday, has found senior ball a big step up from the junior level.

“It’s the size,” the Grade 11 student said. “It’s kind of hard being a smaller guy against a bunch of big guys so I’ve been adjusting to get my shot up faster, jumping up higher and playing defence against bigger guys who might body you around.”

Although it is early, Thorold coach John Kwiatkowski has liked what he has seen so far from Maltby.

“He had a phenomenal season last year and he was the heart and soul of our juniors,” he said. “He’s coming up and playing senior which is higher intensity.”

Kwiatkowski is confident he will fit in quickly

“He can (play senior) but he can’t dribble six or seven times,” he said. “He is so fast and so quick but everybody at senior is.”

Maltby was a member of the Thorold junior squad that lost in the Zone 4 finals last season to an undefeated St. Francis squad. He missed the zone final with a groin injury but has used that season to launch himself into his first senior campaign.

“It was very disappointing working so hard throughout the year to get that point and not being able to play,” he said. “It was still a very good year and it was good motivation for this year.

“Since last year was so good, it gave me energy for this year and made me feel more confident to play at a higher level,” said the Welland Warriors travel player.

“After playing St. Francis in the Standard tourney, we are playing with intensity,” Kwiatkowski said. “We talk about hard work, playing smart and playing together. The other two we are struggling with but the playing hard is there.”

Kwiatkwski is doing a lot of coaching during the game because his squad is inexperienced.

“I have had phenomenal teams where I don’t say a word because they know everything inside,” he said. “I prefer that.”

He has also had to be more vocal ever since the team’s best player and hardest worker, Colton Spencer, went out with a knee injury.

“He’s out for the season and that is killing him because this was his year,” Kwiatkowski said.

“At the beginning of the game, we were right with them but we couldn’t finish,” Eden coach Brian MacIssac said. “We missed so many layups.

“We did play a lot last week and it’s Monday but it is the same for them,” he said. “We have a lot to work on.”

BPSN Star of the Game: Thorold’s Devon Maltby with 18 points.