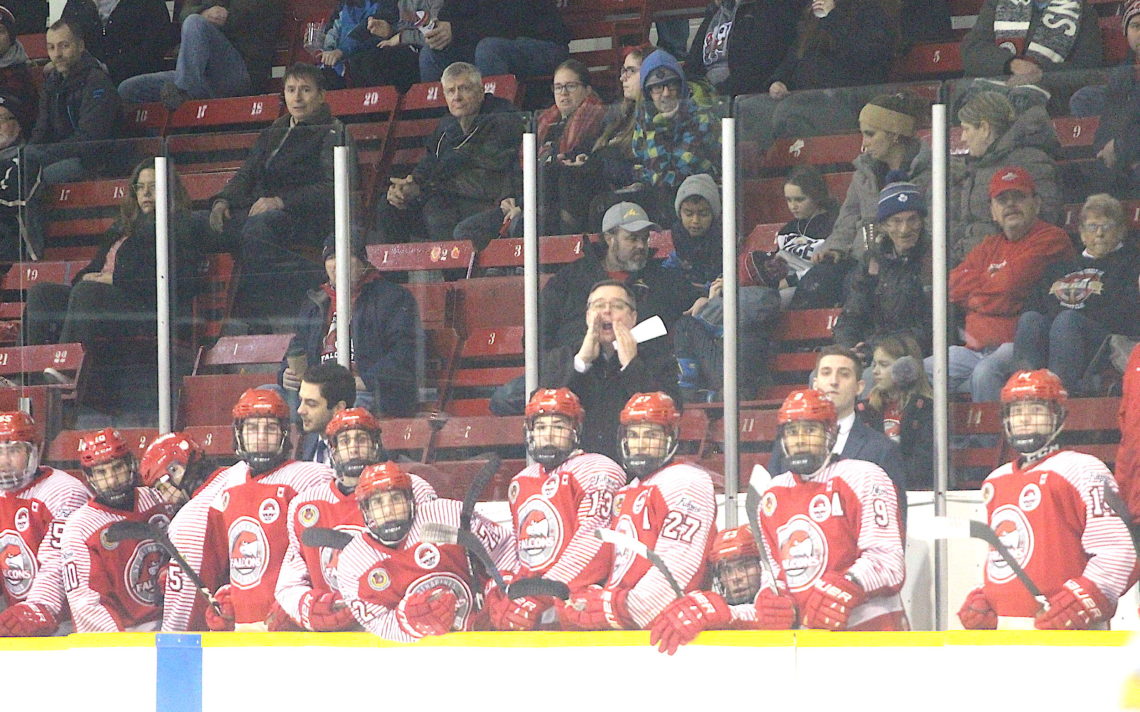 GOJHL asks for fans in the stands

The Greater Ontario Junior Hockey League is slated to begin play in less than one month and would like to do so before fans.

The GOJHL has requested arenas to have up to 30 per cent capacity when play begins Dec. 2 as long as physical distancing can be maintained between extended households.

Return-to-play plans must be approved by local public health units and arena operators, according to GOJHL commissioner Mark Tuck.

“It’s local public health units that allow people in the arena,” Tuck said. “Other arenas throughout Canada are permitting fans. In Alberta, it’s 100 fans and Saskatchewan has 150. Manitoba I think is 50 per cent capacity. We’re just asking (to) let us have fans.”

“The fact of the matter is if we can have 30 per cent of our capacity, that’s 1,000 people and we average 550 fans per game. It’s going to give fans more than enough room to be socially spread out,” he said.

The league said in a press release that assigned seating must be available in arenas, and if it isn’t available, then a maximum of 150 spectators will be allowed. As well, all facilities and teams must find a way to establish fixed seating where individual seats or seat numbers aren’t available, such as taping or cordoning off areas. Members of extended households must sit together and must be at least two metres apart from other households or groups. Spectators visiting, moving around and congregating will be discouraged. Spectator tracking will be done and all fans must wear a mask.

The Falcons and Niagara Falls Canucks have been engaging in no-contact scrimmages with no fans and a total number of 50 people in the arena, including players, referees, coaches and off-ice officials. The Fort Erie Meteors and Pelham Panthers have also bubbled together for a similar arrangement. The Panthers and Thorold Blackhawks plan to play each other for the month of November.

The number of people in arenas has been set by the Ontario government and Tuck said that in order to move forward with a season, that number would need to be increased.

“The government has what they call a league of 50,” Tuck said. “For anyone to play hockey in Ontario that league of 50 has to become a league of 150 or 200 so that we can allow six teams to bubble, which is 120 kids.”

Should the bubble be expanded, it is expected to include five teams in the Golden Horseshoe conference: St. Catharines, Niagara Falls, Pelham, Fort Erie and Thorold.

“It’s going to be hard to play St. Catharines and Niagara Falls for 40 games,” Tuck said. “That’s just not going to happen. That is the biggest issue the government has to get straightened out.”

The Caledonia Corvairs and Hamilton Kilty B’s would play in the Western Conference while the Welland Jr. Canadians and Buffalo Regals announced they will not participate this season.

Girhiny is hopeful the plan will come to fruition despite a dramatic increase in COVID-19 positive tests across the province.

“We’re being proactive and doing everything we can to make our players safe,” Girhiny said. “We’re for it as long as everything falls in place. There are other areas that are able to have hockey. In our specific region, we can work with the numbers at 30 per cent because of the size of the venues. We do need fans in the stands but we can operate on that 30 per cent model.”

Tuck feels it is important to try and regain some sense of normalcy, provided it is safe to do so.

The 2019/20 GOJHL season was halted in March due to the pandemic.