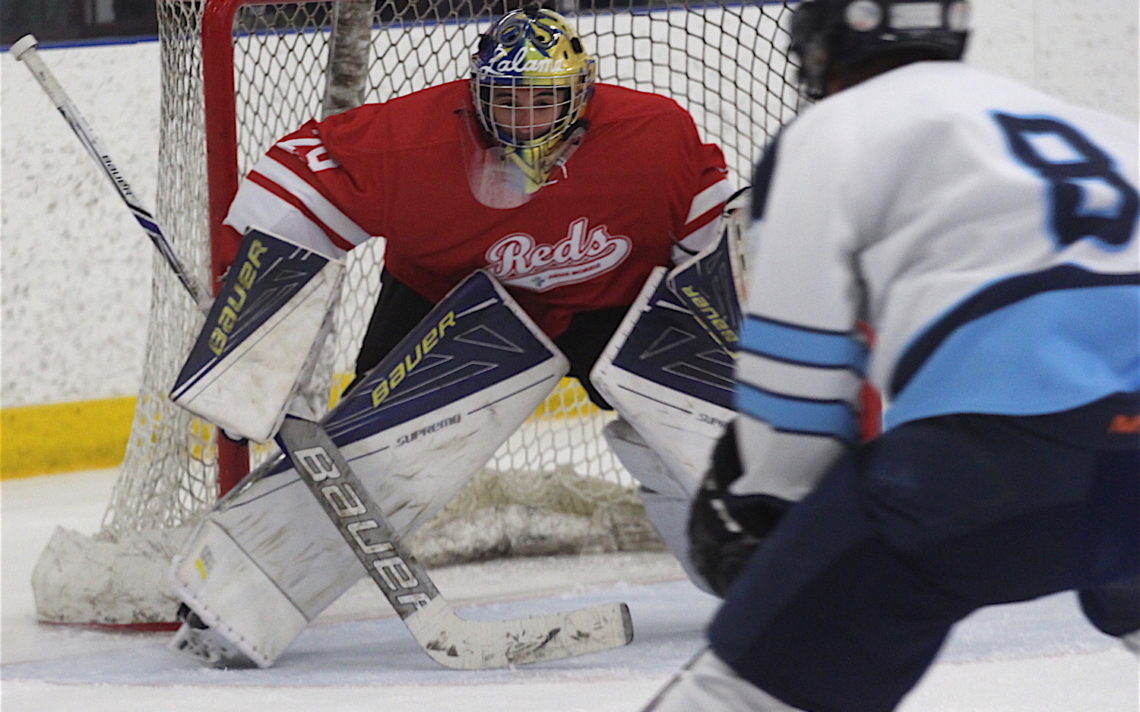 The Vikings recorded the first five shots on goals and were outshooting the Reds 9-2 early. Denis Morris goalie Matteo  Lalama gave up one early goal, but that was it as the Reds ended up winning 4-1.

The 16-year-old Lalama was excellent in the game and made 36 saves as his team was outshot 37-29. 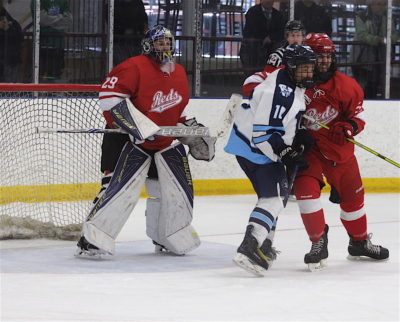 “He let a goal in at the start of the game that wasn’t his fault, but he put it behind him, moved on and played fantastic.”

“For sure it’s a luxury,” McLaren said. “Both kids can keep the puck out of the net in fine fashion.”

Dunn has been hurt for the last month and he is just back on the ice.

“If we need him, there wouldn’t be much of a change,” McLaren said.

On Wednesday, it was Grade 10 goalie Lalama who backstopped his team to 4-1 victories over Eastview and A.B. Lucas.

“We were hemmed in at the beginning, but then we fought back and scored a couple of nice ones and took it from there,” he said.

Lalama is coming off a AAA season where his team underperformed.

“We were supposed to do better than we did and we didn’t have the best of luck in the round-robin at the SCTA’s (South Central Triple A),” he said. “We had a couple of ties but we did get a chance to play in the OHL Cup. It was a good experience even though we didn’t have a good game.” 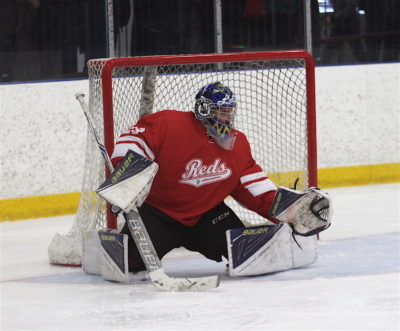 Lalama felt his minor midget season was a good year and he took a lot from it.

“I learned not to worry about who was in the stands, but to focus on the ice and play the same every game,” he said.

In the stands were Ontario Hockey League scouts deciding which goalies to pick in the league’s draft on April 7.

“I am thinking about it a little bit and it is in the back of my mind,” Lalama said.

He has had a couple of Ontario Hockey League clubs talk to him and he would love to play major junior A hockey.

“It’s a great development league, it’s the best league to go straight to the NHL and the top talent is there from all over the world,” he said. “It is a great place to be.”

Lalama has been playing triple A hockey for seven years, starting in tyke. It wasn’t until this season that he realized he might have a chance to play in the OHL.

“Coming into this season, I wasn’t sure because I was kind of undersized,” he said. “Most scouts look for bigger goalies, but about halfway through the season I started to talk to some people and I got word from my coaches that I was ranked.

“I was kind of shocked and happy at the same time.”

His AAA season had been over for about a month which has allowed him to move on to his next hockey goal.

“It was good to get it over with and focus all my attention on OFSAA,” he said.

With a 2-0 record, McLaren likes where his team is sitting.

“We are in good shape and we kind of control our own destiny,” he said. “If we can win or tie in the morning, we will be all set.”

“The boys get to sleep in their own beds, which is a perk of hosting OFSAA, so they should get a good rest,” McLaren said.

“We played four good periods of hockey today,” McLaren said. “If we play three good periods a game, we are going to make some noise.”