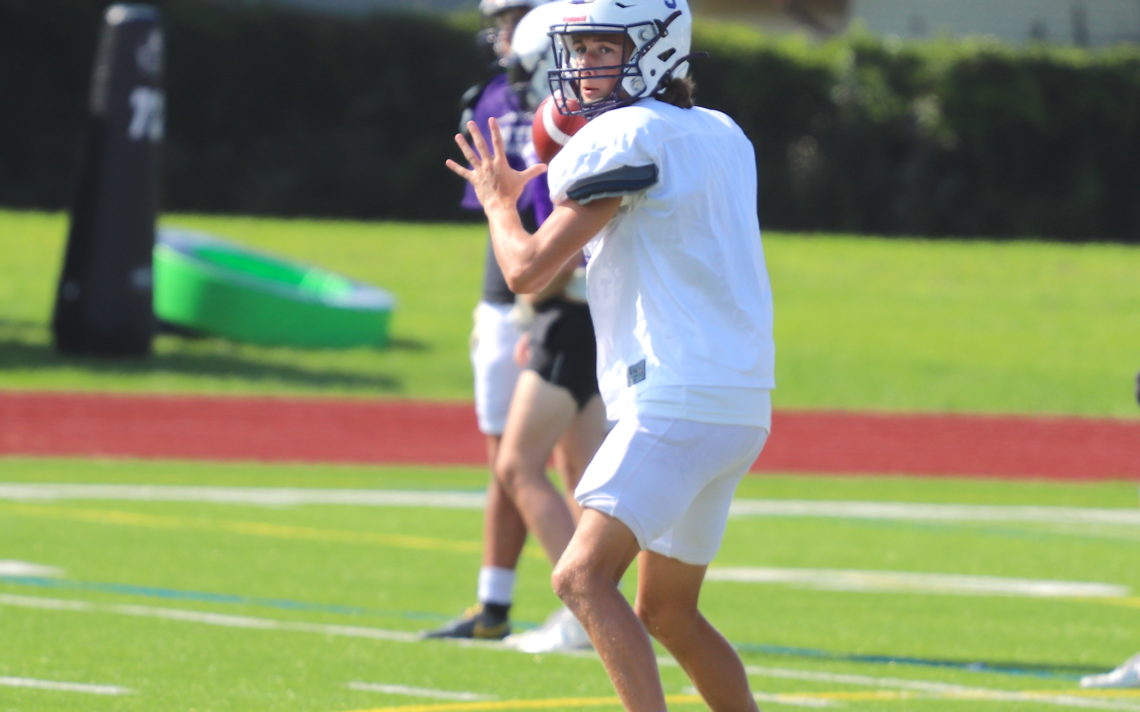 Go forth and lead

When fans last saw Myer’s Tyler Goforth last fall in Niagara Region High School Athletic Association senior football action, the then-Grade 12 student came up with an electrifying, tackle-busting 80-yard TD run at the end of the third quarter to propel the Marauders to a 22-13 victory over Sir Winston Churchill in the Tier 1 championship game.

The 18-year-old’s dynamic play will now emanate from the quarterback position for defending champion A.N. Myer.

“He has trained and worked so hard and he’s good. He is a 12B and it is his time,” Myer head coach Dave Buchanan said. “He has great speed, he has a strong and accurate arm and I’m excited for people to see him play.”

“I am pretty excited. All the work I did in the summer and even last year, it was all quarterback training for the different touch football teams and stuff,” he said. “It is exciting to bring it into the tackle field now. It will be the first time I have played quarterback at this level in tackle.”

He feels quarterback is the perfect spot for him.

“I like having the ball, honestly. It sounds selfish but I like being able to make that play and use my athletic ability to help put my team in a better position to win the game.”

He describes his quarterback style as versatile.

“I can sit in the pocket if I have time and make the throw but if the pressure is coming in, I can get out of there and still be able to make a play on the move. And if I need to tuck in the ball and pick up some yards, I can do that too. I feel there is always an option to make a play.”

Goforth has lofty expectations for his team.

“We’re going for the OFSAA (Ontario Federation of School Athletic Associations) win. It is our last year and we are going for it all.”

He knows it won’t be easy but he is confident in his squad’s chances.

“It will be our execution. We have done a lot more reps over the summer leading into the season and hopefully we can out-execute other teams, make less mistakes, win the turnover battle and score more points than them.

“We are going to out-work and out-practise everybody else and hopefully that gets us to where we want to be.”

Buchanan isn’t ordering the championship rings any time soon but believes his squad will be competitive.

“We are young. We have a few older guys but not as much as we have had historically. We have a big Grade 11 crew and our hope is to compete,” he said. “I think we will be good but I just know that the teams in our league are getting better too. The main goal is to just keep getting better every week and this is a really hard-working group. We have been fortunate in the past because we have had kids buy in and this group has bought in.”

He knows a younger squad will need time to adjust to senior ball.

“We have to get used to the physicality and the speed and we are facing teams in our league that are a little bit older. But we are just worrying about ourselves.”

After getting pushed around in the Niagara Bowl last fall by Notre Dame, Buchanan felt his team needed to get in the weight room and build that part of its game.

“It always got to get better but I do think a lot of kids did try to get into the weight room. I think our next step is the quality of the lifting. We are connecting with Steve Lidstone (Brock’s associate director of sports performance) — we are fortunate that his son is here — and we also have Brock students here as trainers. They are leading our warmup and cool downs and we are trying to take that to the next level. In the off-season, we will try and mesh with Lidstone and his program so we can learn how to lift the right way.”

This year’s team is a little different from past Myer teams that were undersized on the offensive and defensive lines.

“Our younger group is bigger and we have some linemen which is unusual for us. We are not just putting linebackers or whoever on the line just to sacrifice for us. We have a full crew of seven to eight linemen that we can put on the line. We have one 12 on the line and everybody else is 11.”

Myer’s road to a championship gets harder every year. The league as a whole is getting stronger and each year there are less soft spots on the roster.

“We are going to have to play well because many programs are doing a great job. Dave’s (Sauer’s) team in Fort Erie is a little bit older this year and he had a lot of injuries last year. His team is better than people thought,” he said. “I know Grimsby had a big strong team last year and now they have a big school (West Niagara) so they will come out flying. And Sir Winston always has a talented team.”

“Notre Dame is the team to beat and everybody knows it,” Buchanan said. “We are trying to get through our league and compete and whoever wins is going to want to compete with whoever wins out of there. I’m not necessarily crowning Notre Dame because I respect what Ricky (Oreskovich) does at Saint Paul. Saint Mike’s has some tough kids and BT is good.”

Key players on offence for the Marauders will be Tyler Goforth, Evan Goforth and Arden Martinez.

On defence, Myer will be led by defensive back Eugene Park, Martinez and transfer Aidan Hunt, a defensive end.