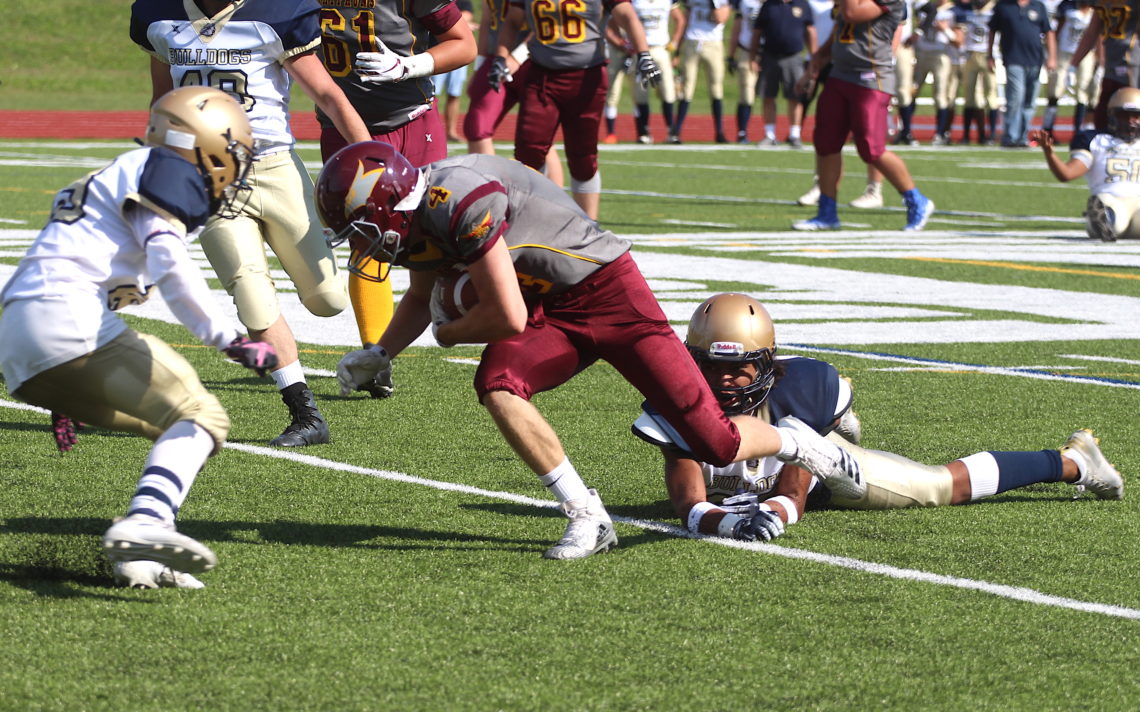 The Bulldogs opened the scoring in the first quarter when they faked a field goal and Josh Morley ran the ball in from 10 yards out. In the second quarter, the Gryphons capped a long drive with a four-yard TD run by Drew Beam. Close to end of half, Campbell LaRoche passed a long ball to Reilly Borelli for a 60-yard touchdown and a 13-7 halftime lead. 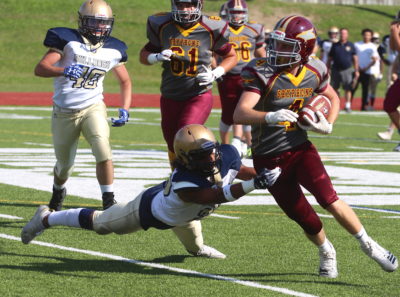 Greater Fort Erie added a single point in the third quarter to build a 14-7 lead and set the stage for some late-game fireworks.

With 1:08 left in the game, the Gryphons attempted a 10-yard field goal that was blocked by Moses Lougheed and returned by Lougheed for a touchdown.

Then, with 40 seconds left in the game, the Gryphons’ Dave Stewart picked off a Churchill pass to give his team possession on the Bulldog 40-yard line. LaRoche hit Borelli for a 30-yard pass completion and two plays later Laroche ran the ball in for a 10-yard score with 4.8 seconds left on the clock. Colin Western finished the game with an interception.

“Overall, it was a sloppy start to the season,” GFESS head coach Dave Sauer said. “We were missing our starting running backs and the heat today made it tough.”

The Gryphons relied on their depth to pull them through.

“We asked a lot of guys to step up and play and they did. I am so impressed with their effort today,” Sauer said.

He describes his team as a great group of guys. 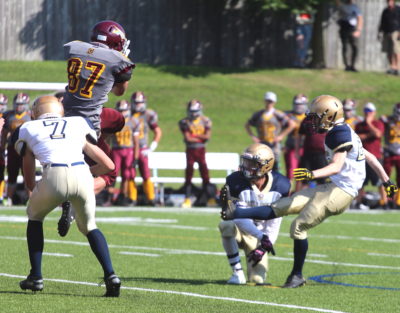 “We had a number of guys come back this year and dedicate themselves to the team. We should be really deep and that showed today,” he said. “We should be able to ask the next man to step up and fill a role. I think we should be very competitive this season and should improve every week.”

Churchill head coach Peter Perron was disappointed with the loss, but happy with how competitive his team was against GFESS. Last season, the Bulldogs lost 35-0 to the Gryphons in the regular season.

“Compared to where we were last year, we are a year older and a year more mature,” he said. “They beat us pretty handily last year and this year with a varsity team, we played a heckuva game and kept it close to the end.

“I am proud of that and we are heading in the right direction.”

Churchill was also missing starters who were attending a camp.

The Bulldogs have 42 players on their roster this season, including eight Grade 9s, 14 Grade 11s and 19 Grade 12s. 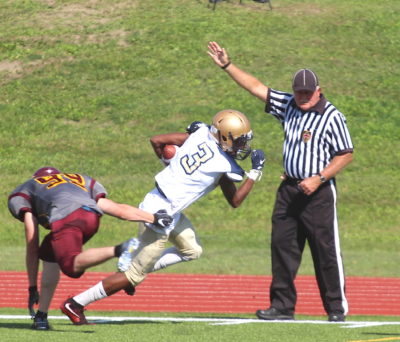 That roster hopefully will produce a season Perron has been building towards.

“The nice thing is that the kids in Grade 9 and 10 aren’t ones that you have to teach tons to,” Perron said. “They are at a point where they are ready to go.”

There are also quality players arriving next year at Churchill.

“I am hoping I am getting to the point where I have a wider base of quality players at the bottom moving up because of varsity.”

Perron expects his squad to be a lot more competitive this season.

“We can compete with those other teams and that’s what we have been aiming for,” he said. “I have been working at this for three years and I knew I had to take some lumps because we were such a young team.”

The A.N. Myer Marauders opened the defence of their NRHSAA Tier 1 football title Friday with a 48-0 victory over the Westlane Spartans.

“The boys didn’t give up but they capitalized on our mistakes,” Westlane coach Jason Babony said. “It was Week 1 stuff for us and they seemed in mid-season form.”