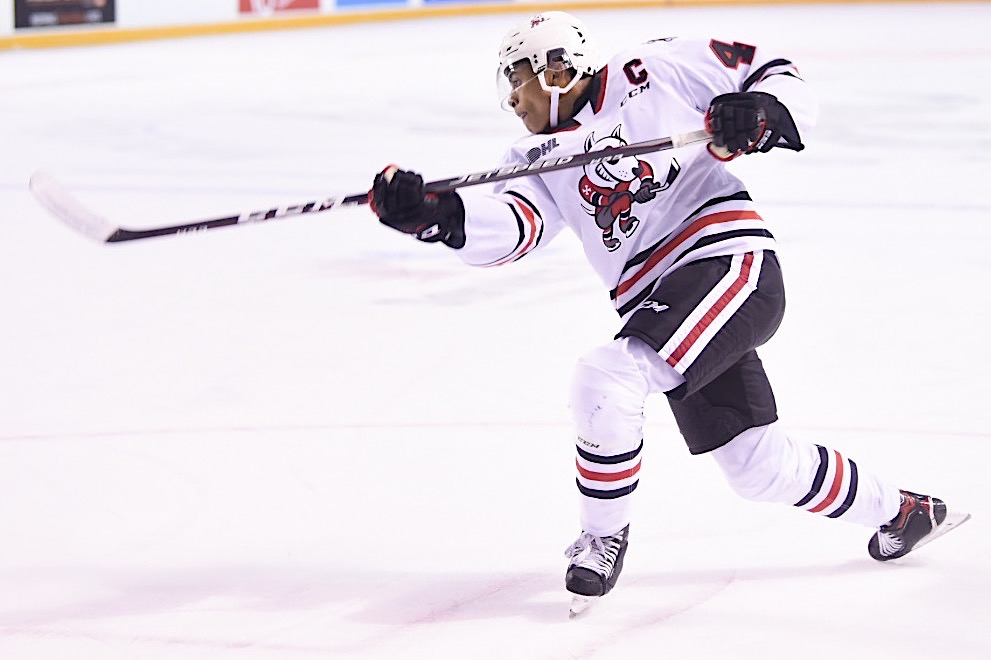 It didn’t take Akil Thomas long to make his presence felt with the Niagara IceDogs.

Niagara’s captain made his season debut Thursday night and picked up an assist while playing his usual dynamic two-way game in a 4-3 overtime loss to the Oshawa Generals in Ontario Hockey League action in St. Catharines.

Thomas missed the first two games of the season while attending camp with the Los Angeles Kings. He returned earlier this week much to the relief of IceDogs head coach Billy Burke.

“He’s a stud,” Burke said. “It’s unbelievable how easy he can make the OHL look at times.”

“I can remember one where it could have maybe been an odd-man rush, but he was smart and made a smart, veteran play and chipped it low and grinder them down in the offensive zone. It’s so many little things.”

Thomas played on a line with Oliver Castleman and Anthony Agostinelli for the most part, leaving Kyen Sopa to play with Phil Tomasino and Jackson Doherty.

“He makes our lineup so much better,” Burke said. “It for sure gives us more depth. It’s tough to expect Tomasino, Castleman and Sopa to carry all the load. We can split them up now and have two pretty good lines with some moveable parts in and out and see who’s playing well on a night-to-night basis.”

The IceDogs grabbed a 1-0 lead after an efficient opening 20 minutes in which Niagara outshot the Generals 13-10. Castleman netted the lone goal of the period when he banged home his second of the season with the man advantage.

The Gens grabbed a 2-1 lead with a pair of goals in the second period. With 7:33 remaining and the scored tied 1-1, IceDogs starting goalie Christian Sbaraglia was ejected followed a five-minute major for roughing. Tucker Tynan took over and gave up a power-play goal about a minute later. It is the second straight home game Tynan has had to relieve Sbaraglia.

Thomas set up Mason Howard for a short-handed goal to tie the game 2-2 before the Gens retook the lead at 3-2 on a goal by Jacob Winterton than barely made it over the goal-line behind Tynan. Drew Hunter then tied the game 3-3 with 20 seconds remaining and Tynan on the bench for the extra attacker.

Oshawa won it when Danial Antropov scored with 2:23 remaining in the extra period.

Burke, while disappointed with the loss, was pleased with the effort overall.

“It would be great to get the other one (point) but realistically, that’s a huge point for us,” he said. “We battled through adversity and came back twice in the third period to tie it.

“Obviously, it would feel better to win, but there were a ton of positives and one point is better than none.”

BPSN Star of the Game: Danial Antropov with two goals and an assist.

Up next: Saturday in Flint, Sunday in Saginaw.