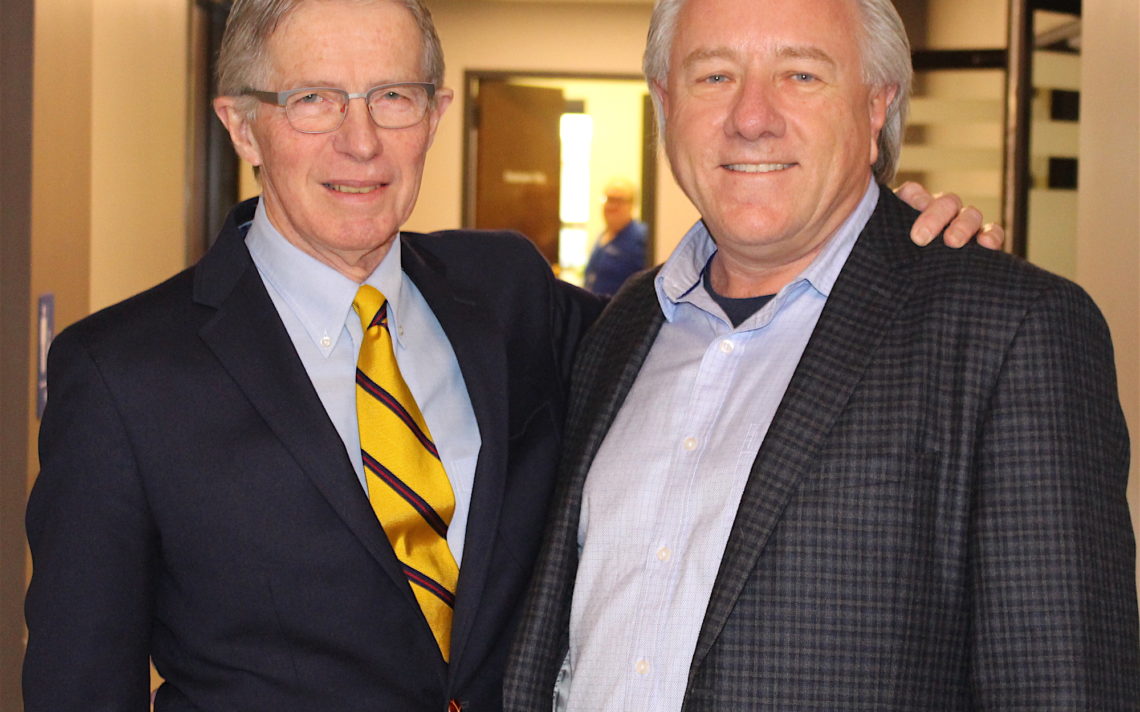 Geddie and Shaver named 2017 Sportspersons of the Year

It’s a partnership that began on a curling rink and has resulted in St. Catharines hosting several provincial and national curling events.

Long-time buddies Doug Geddie and Keith Shaver were recognized for the fruits of that partnership Monday night at city hall when they were awarded the 2017 St. Catharines Sportsperson of the Year Award. They were honoured for their major role in the city hosting the Scotties Tournament of Hearts last winter.

“We have been friends for a long time and we have curled together for years and years,” Geddie said. “I was a skip and he was my vice so we were pretty used to standing in the house together and trying to figure out whether we were making the right decision.

“It worked in the game and it works well in this type of situation.”

“One thing led to another and our first stab at nationals was doing the Canadian junior championships back in 2001,” Shaver said. “We had blast doing it and have continued ever since.”

Geddie described the 1995 juniors as a test run.

“I had hoped after all these juniors that we could maybe do a world juniors and I went to Europe to see if they would consider us,” he said. “It went to Quebec because I was naive and didn’t realize provinces put money on the table to attract these events. Now I know.”

Geddie and Shaver had always envisioned hosting a major curling event — bigger than the Canadian juniors — but they were limited in what they could pursue by the size of the Jack Gatecliff Arena. That all changed with the construction of the Meridian Centre.

Curling Canada was having some of its annual meetings in Niagara Falls and Geddie took the organization’s event manager on a tour of the Meridian Centre while it was under construction. The manager suggested they bid for a Scotties. They put forward a bid in 2015 and landed the 2017 Scotties. They are now in the process of bidding for a Brier to be staged in St. Catharines. 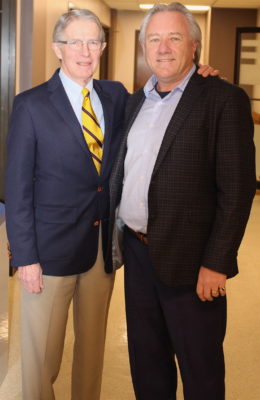 “The Scotties was a fabulous eye opener for the community and it was also an awakening for the governments; the city and the region,” Geddie said. “They were startled by the success of the Scotties and they asked if there were other opportunities.”

An NHL-sized arena used to be one of the requirements to get a Brier, but the television-friendly aspect of curling has made it impossible to attract 15,000 people to an arena to watch curling.

Geddie and Shaver are the perfect compliment to each other.

“From the beginning, he was always the money guy and I was always the marketing guy,” Geddie said. “I did the organizing and I dragged him in because we needed some financial help.”

They both bring specific skills to the task.

“He is also good with the diplomatic ties and a feel for saying things properly,” said Shaver.

Geddie is usually the face of the host committee.

“I am good with being behind the scenes and letting him be the spokesperson for it,” Shaver said. “We work well together along with all the other volunteers that help.

“They all chip in and get things done.”

Shaver and Geddie bring different perspectives to the table.

“He looks at it one way, I look at it totally differently and we put our heads together and we come up with some solutions,” Shaver said. “It’s not like we go at it with blinders on. We have different ideas, we talk about it, kick it around and make it happen.”

Geddie, a Hamilton native who moved to St. Catharines in 1970 and runs a marketing firm, is motivated by his love of the sport.

“I have always liked curling as a game and I still play it a lot,” he said. “I like the people that it attracts and I think it is about as Canadian an institution as you can get.”

He started getting involved in the coaching and organizational side of curling when his daughter, Kate, was a curler going to junior competitions.

“I took coaching courses, got much more familiar with the sport and met a lot of people at the provincial and national level who organize it,” Geddie said. “They are good people and it’s a pleasure to work with them and try and make these events happen.”

Shaver, born and raised in St. Catharines and a chartered accountant with MNP, volunteers for a number of reasons.

It’s also a lot of work.

“It is but you don’t necessarily look at it that way because you spend your time doing it and it’s rewarding when you walk out on the ice to see 5,000 spectators at the opening ceremonies; the banners, the players and the flags from right across the country,” Shaver said. “They are all enthusiastic about it and that’s what makes it all worthwhile.”

Geddie previously won the Sportsperson award in 2001 for his efforts with the Canadian junior championships. Shaver  received the award for the first time.

But it’s always nice to get a pat on the back.

“It’s sure is and after we ran the Scotties we had some letters come through from the players thanking us for hosting the event,” Shaver said. “Getting those letters, they are totally unexpected, but when you get them it is a nice pat on the back.”