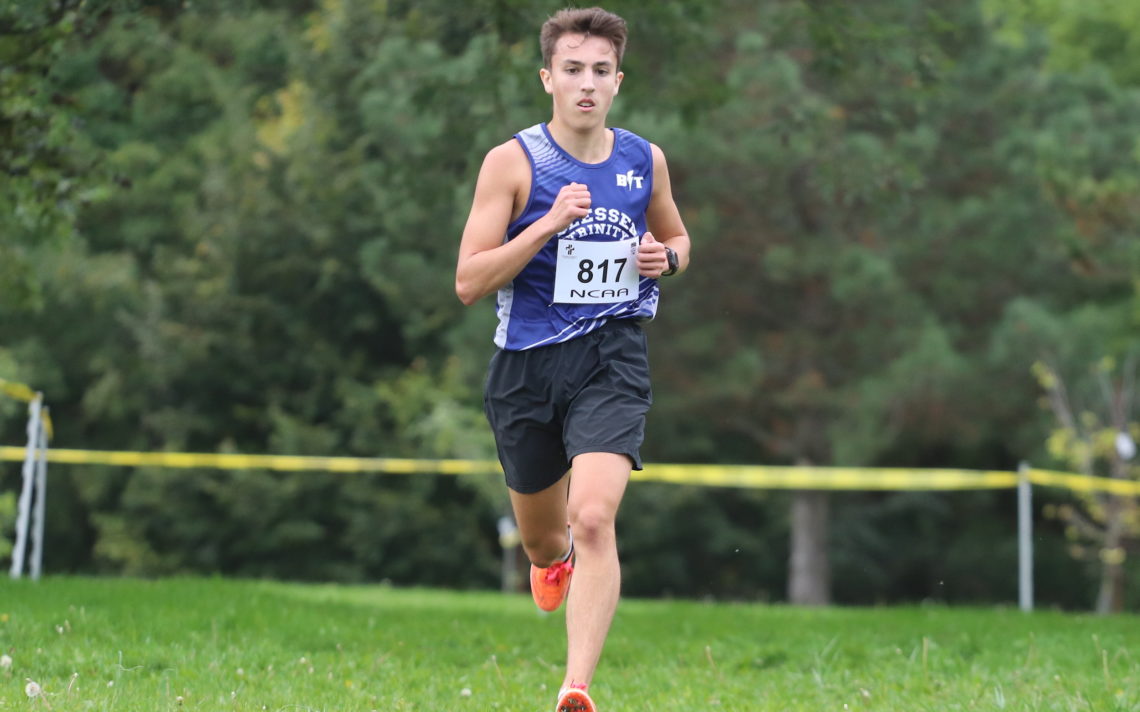 After missing a summer of training because of an ankle tendon injury, Reese Arnold was climbing the walls waiting for the high school cross country running season to come around in September.

“That really sucked a lot and it was time to bring the beast out in me,” the Grade 12 student at Blessed Trinity said. “I’m tired of being the underdog and no one knowing my name. People are going to know my name now.”

“Once I got healed up in early September, it was time to bring out the inner demon in myself and I started just flying through the workouts, trying to work my butt off day in and day out in the weight room, on the field and on the track, and sticking to the plan.”

He wasn’t too happy with his race Wednesday.

“Unfortunately I didn’t execute the plan today and my time was a little slow,” the Beamsville resident said. “This was the first race of the season and my first race back from injury. I have a lot of potential to keep going and winning more so now I am going to focus on winning SOSSA (Southern Ontario Secondary Schools Association championship).”

Arnold started running competitively on Grade 6 with Runners’ Edge. In Grade 9, he was third at the zone championships, fourth at SOSSA and 53rd at the Ontario Federation of School Athletic Association championship.

“Grade 9 was a focus year for me to see where I was,” he said. “In Grade 10, I started training a lot harder because I wasn’t too pleased with my times. Coach (Benny Ralston) and I talked and I got better and better.”

He was second at zone, third at SOSSA but didn’t perform well at OFSAA in Grade 10 because of the wrong footwear choice in snowy conditions in Sudbury,

His third-place finish at SOSSA that year was an important moment in his running career.

“It was an eye opener for me because it showed the potential that I did have.”

He is looking to turn potential into performance at the end of this season.

“I am really hoping to finish in the top 40 at OFSAA.”

When asked about his running background, Anthony Hendriks answered in the negative.

That background allowed the 15-year-old Beamsville resident to boot his way past the rest of the field and win the junior boys NCAA cross country title Wednesday at Firemen’s Park.

He was confident but not overconfident heading into Wednesday’s race.

“I had a feeling because I do a lot of training.”

He trains five days week with the team and the remaining two days on his own.

Running is crucial to his play at the centre back position.

“It’s super important if you want to play for 90 minutes.”

His ultimate goal is to get a soccer scholarship and he’s not too concerned where the high school running season takes him this fall.

“It’s just running as hard as I can and getting extra training for soccer.”

“I know it was going to be harder so I decided to push myself more,” the Grade 9 student at Saint Francis said.

The 14-year-old’s strategy worked perfectly as he finished first in the novice boys division.

“I have played soccer my whole life and that helps with my running,” he said.

At the elementary school level, he was the Niagara Catholic District School Board champion at 800 metres and placed second in cross country. He has no goals for the high school season.

“I am just going to keep going, I guess.”