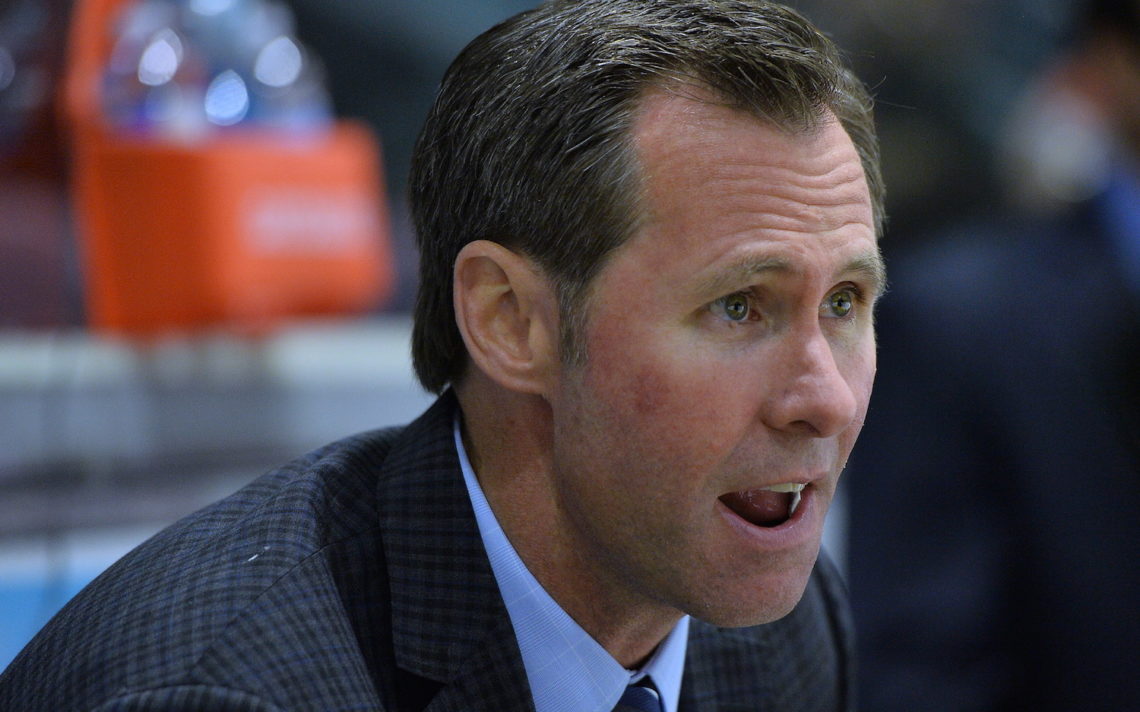 When the Niagara IceDogs went searching for an assistant coach last summer, they weren’t quite sure who they were going to be able to come up with.

The organization was sent for a bit of a loop when head coach Dave Bell abruptly took a job in the pro ranks with training camp only a few weeks away.

Billy Burke was quickly promoted from assistant to head coach, but finding a qualified, experienced assistant at that stage of the summer could have been difficult.

Fortunately, a perfect candidate was available.

Ted Dent was coming off an 11-year run as an assistant and head coach with Rockford of the American Hockey League and was looking for a way to stay in the game.

Dent’s experience was exactly what the IceDogs were looking for and a deal was struck to bring in the 48-year-old Toronto native as an associate coach to mentor Burke.

“I think they wanted a little experience to help Billy along with the trials and tribulations of being a head coach which is totally different from being an assistant,” Dent said. “The pressure you put on yourself and the answers you have to come up with and the problems you have to solve and the decisions: There are a lot more decisions involved.

“I’m there as a buffer to help Billy out. I’ve gone through it myself. Practices and game plans and how we want to play structurally. That was the first thing we did when I got here at the end of the summer. How do we want to play? Who do we want to be? Whatever they need me to do, I’m here to do.”

Burke admitted the organization was concerned what type of candidates would be available.

“Timing wise it was very difficult and we had no real opportunity to plan and it became a bit of a scramble,” Burke recalled. “Thousands of resumes starting coming in and we had a major decision to make. Being a rookie head coach, I wanted a guy with experience I could lean on.

“The fact Ted was available was huge for us. He came extremely highly recommended from other coaches and players.”

While Dent had more than his share of experience and success at the pro level, he had never coached or even played in the Ontario Hockey League.

“It’s a little different, the schedules and the travel and the day to day because of the schooling,  but coaching is coaching,” Dent said. “When we get to the rink and go over practices and work on things we have to work on that day, we formulate lineups and a game plan for opposition. That’s all coaching.

“You’re dealing with the players, different personalities and a different age group, but it’s been good.”

Dent said having a teenager at home has helped after dealing mainly with seasoned pros.

“I’ve had some as young as 19-year-old in the American League coming out of junior. I have a son who is 17 and same age as these players and he’s playing in Illinois so I can relate to that age group though him a little bit and how to communicate with them the best way.”

Dent said as soon as he was let go in Rockford, he knew he didn’t want to sit around and take a year off.

“I wanted to continue coaching. You never know where your career is going to go in hockey. I’ve coached for 18 years and wanted to get back into coaching right away and that’s what I pursued.

“I’m an active guy. I’m a busy body. I enjoy the routine and putting in a full day’s work. I wanted to coach this year and it was late. I was really close on a couple of different opportunities at the pro level. It came down to the wire and that’s why the process took so long.”

Dent handles the defence and runs the penalty kill, but a big part of his job is also working with Burke and assistant coach Kris Sparre.

“I’m always asking him questions,” Burke said. “It’s great to have that experience to help me out. Kris’ responsibilities and impact on the team have increased greatly this year and he’s answered the bell 100 per cent. For me, in my first year, to have these two guys, I know they have my back 100 per cent. There’s nothing going on here. We are all in this together. It really does feel like we are one solid unit.”

Dent played four years at St. Lawrence University before turning pro. He began coaching in the ECHL before joining the Chicago Blackhawks organization as an assistant at Rockford in 2006/07. He spent five years as an assistant before being promoted to head coach.

“I was involved with the Blackhawks when the whole development model came on board,” he said. “The focus was on practice and skill development, more so than winning. (Joel) Quennville came in and started the process and started to build a really good foundation in Rockford with the development model and made it a really good place for players to be from nutrition, to workouts, to on-ice, to everything. It was a whole education process for the players.”

Dent is proud of the fact in his time in Rockford more than 80 players went on to played at least one game in the NHL and about two dozen were able to win a Stanley Cup with the Blackhawks.

Dent admitted it could be tough to balance the organization’s philosophy of development versus winning.

“You have to go with organization’s philosophy and what they want and follow their path. Our motto became more and more about development and less and less about winning. It is hard because we are all competitive and we all have competitive juices. You do ride that fine line for sure.

“You try and create environment where it is fun to come to work everyday because we knew at times we weren’t built to win a championship.”

Dent, who lives in Illinois in the off season with wife Kathryn and three children, isn’t worried about the future and if he may end up in the NHL.

“I don’t think you’re coming to work (saying) I want to be in the NHL. I’ve been in that league as a video coach in a lesser capacity and it was still a great experience. I want to do the best I can here and help this team win this year and make a good impression and see where it takes me from there.”

The IceDogs lost their third straight Tuesday in Kitchener, dropping a 3-1 decision.

Kole Sherwood gave Kitchener at quick 1-0 lead just over a minute in. Sam Miletic got that one back later in the period for the IceDogs with his 27th of the season.

Following a scoreless second, Jonathan Yantsis gave the Rangers a 2-1 lead three minutes into the third. Connor Bunnaman iced the game away with an empty net goal at 19:34.

Colton Incze made 34 saves in goal for Niagara.

Mario Culina was the game’s first star, kicking out 44 shots for the Rangers.

Below is a look at Dent’s coaching history courtesy of hockeydb.com