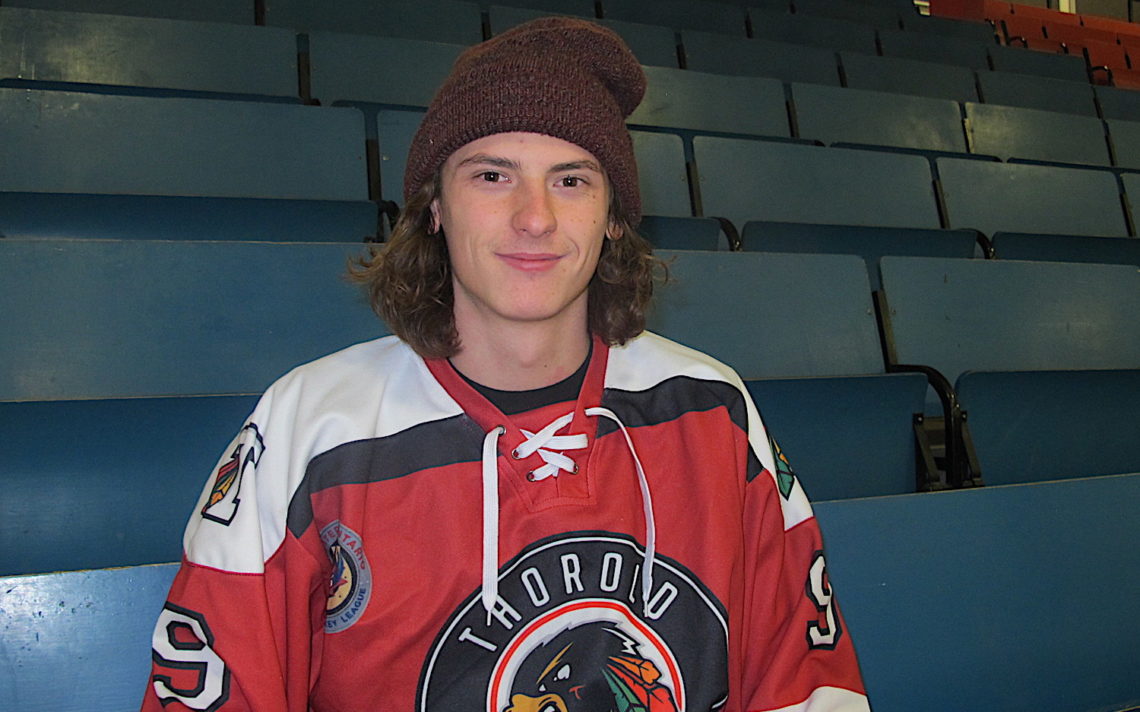 Griffen Fox is leading the Thorold Blackhawks in scoring. Photo by: BILL POTRECZ

Griffen Fox is leading the Thorold Blackhawks in scoring, but it’s his work at the other end of the ice that impresses Hawks coach Scott Barnes the most.

“I know the term gets thrown around a lot but he plays a 200-foot game,” Barnes said of the 17-year-old Brantford native. “He’s really good in his own end. He works hard down there and he’s good in the offensive zone. We expected him to put up some points.”

Fox is well aware of the important of defence.

“I pride myself on being a defensive player first because I learned that if you work hard, the goals will come offensively,” he said. “If you are smart and honest, the chances to score will come.”

Barnes admits it’s not the norm for most gifted offensive players to be so committed at the other end of the ice.

“He’s a guy who has been coached the right way growing up or he just gets it,” Barnes added. “We really didn’t have to work with him on it. He already had it in his skill set. For a guy to work that hard at 17 on a back check or in the D zone is pretty nice to see.”

Fox played last season for the Brantford 99ers AAA midget team where he collected 19 goals and 48 points in 48 games. He was so impressive he was selected in the third round (51st overall) by Kingston Frontenacs in 2017 Ontario Hockey League U18 draft.

Fox was also on the radar of the Brooks Bandits of the Alberta Junior Hockey League before winding up in Thorold thanks to a contact of Barnes.

“We liked him when he came out,” Barnes said. “We heard a lot of good things about him. Right from the get-go, he’s either been our most valuable player, or one of them on our team.

“He’s a power forward type. He’s big and a strong skater. Everybody in this league is well aware of who Griffen Fox is. Whenever they think of our team, his name is usually the first guy who pops up.”

Fox leads the Blackhawks with 11 goals and 38 points in 43 games.

“One of my personal goals was to get close to a point per game, but I didn’t think I would lead the team in scoring where I am at now,” Fox said.

He has made a smooth transition from major midget to junior.

“At first, I thought it (difference) was the speed but then the game kind of slowed down (for me). It’s strength and experience. I think I’m a decently smart player so I can fit it.”

Barnes hopes to keep Fox around for another year but with his development this season, is prepared to see him move on.

“We would love to keep him but we’re trying to move kids on to higher levels. If I can get a young guy and keep him for a couple of years that’s ideal. I think he’s ready.

“I know he’s a very committed kid who wants to go far and I think he can go far in hockey so I think he’s ready to make the jump.”

“I think this is definitely a development year for me. My goal is to keep moving up to the highest level I can. If I can, I want to move up. If not, then I’ll probably come back here,” he said.

Fox, who billets with fellow Branford native and Hawks forward Mitch Britton, is a Grade 12 student at Denis Morris.

It is his first time away from home playing hockey.

“It’s definitely all new but it’s only one hour away. I see my parents almost every week when they come to watch,” he said. “Honestly, I didn’t even know they (Thorold) were a team until someone mentioned it to me but it’s been great for me. I feel like I have developed a lot.”