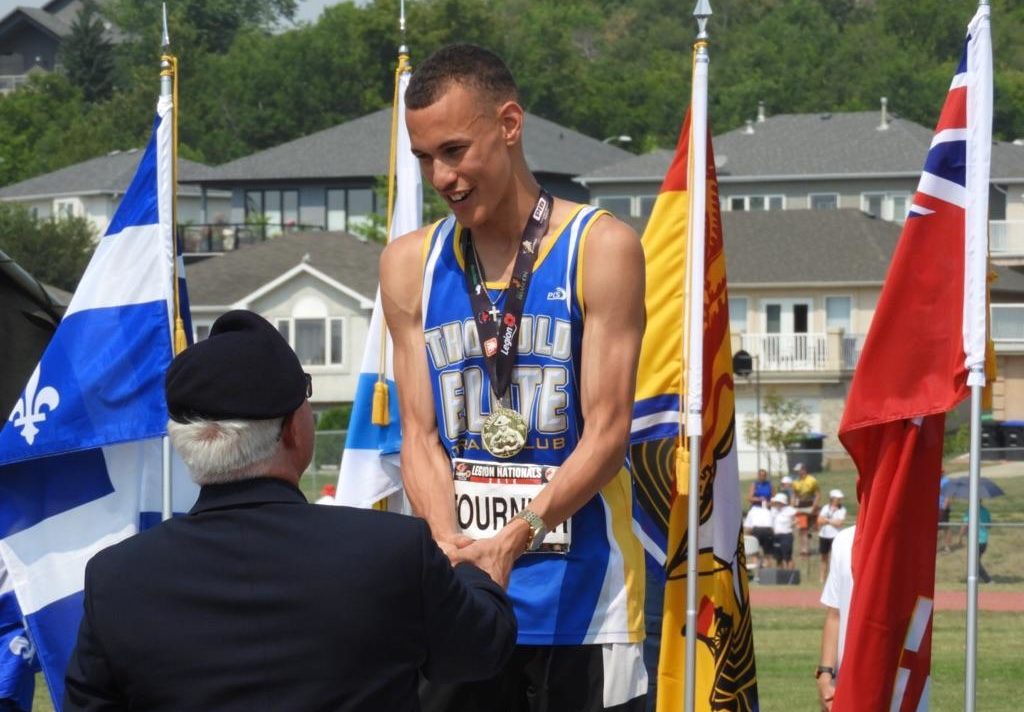 DeAndre Fournier is presented his gold medal in triple jump at the at the Royal Canadian Legion Youth Track and Field Championships in Brandon, Man. Photo special to BPSN.

It has been a season of incredible highs and lows for DeAndre Fournier.

The lowest ebb for the 17-year-old Thorold resident came when he triple faulted in the senior boys triple jump at the Ontario Federation of School Athletic Associations’ South Regionals and failed to advance to the OFSAA championships for the first time in his career at Thorold Secondary School.

All that became a distant and not that important of a memory when the Thorold Elite Track Club member recorded a 14.37-metre leap in the triple jump to capture gold at the Royal Canadian Legion Youth Track and Field Championships in Brandon, Man.

“I was expecting to do pretty well, but I wasn’t expecting to place No. 1 and jump as big of a jump as I did,” the Grade 12 student said. “That all came as a complete shock to me and I was speechless the whole time.

Having the gold medal placed around his neck is a moment he will never forget.

“I remember when I walking out to the podium, my stomach instantly turned into a knot and I couldn’t believe it was happening,” he said. “I was looking around at everyone and it was crazy. I was speechless and it was like a dream come true.”

Leading up to the jump, Fournier was feeling confident, but not overconfident.

His national championship has inspired him to work even harder. 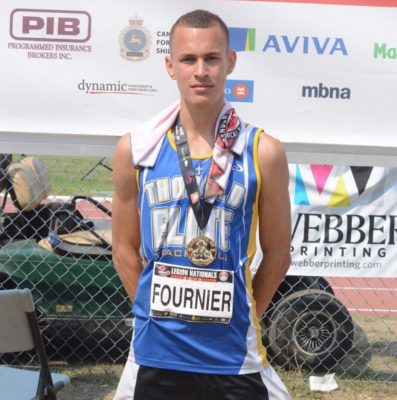 “I have a lot of high goals for next season and I am hoping to train really hard; harder than I did for this season,” he said. “I want to make even bigger improvements and hopefully be in the same position next year.”

In addition to his training at the Thorold Elite Track Club, Fournier has also been helped by horizontal jumps coach Jim Taylor of the Brantford Track and Field Club. Taylor has coached nine national champions and is known as The Triple Jump Professor.

“I have done a couple of practices with him, I have talked to him frequently and he gives me a lot of tips on my jumps,” Fournier said. “I definitely have had a lot of improvements thanks to what he has told me and the team recently. We have all improved thanks to his work.”

To get to the next level in his progression, Fournier feels he needs to get stronger.

“I need to build a lot of strength, increase my muscles and do a lot of workouts because I think I have the technique part down,” he said. “I need to get stronger to get that extra distance that I want and hit my standards for next year.”

Fournier has a recruiting page set up to attract scholarship interest from Canadian and American schools and his Canadian title and new personal best are attractive additions to his resume.

“I have been getting quite a few offers,” he said. “I had a couple of offers from the States and couple from around Canada too. I really don’t know what I want to do.” 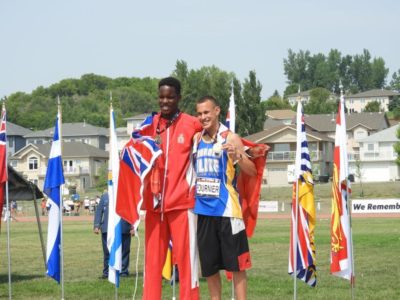 One of the offers was from a NCAA Division 2 university in New Hampshire and another was from a private school in Chicago. With another year of high school left and another summer of track and field in 2019, Fournier will be in no hurry to make up his mind.

“I took a peek at their e-mail and what they had to offer and it was kind of cool,” the reigning Athletics Ontario triple jump champion said. “With all the offers coming in, it is really pushing me to train and get better because I really want to perform at a higher level after (high) school.

“I still have an extra nine, 10 or 11 months to get ready for this and do what I can to meet or exceed what I have already been offered.”

He also knows that school is an important part of his scholarship dreams.

“My grades aren’t too bad, but I can definitely step it up and I know I have more potential in me for better grades,” he said. “That is one of my big goals for this year.”

Track and field is not Fournier’s sole focus in choosing a university.

“I don’t want to go there thinking I am totally there for one thing,” he said. “I want to follow both passions and do the work so I can get a job after my track or when my track takes off.

“I like the story because it is a great example to everyone to persevere,” Fife said. “There were times for DeAndre where it didn’t go so well and where he faulted out.

“We could have given up and let that destroy him, but we decided to learn from it and bounce back stronger.”

Following is the complete list of Niagara athletes and their results at the Royal Canadian Legion Youth Track and Field Championships in Brandon, Man.