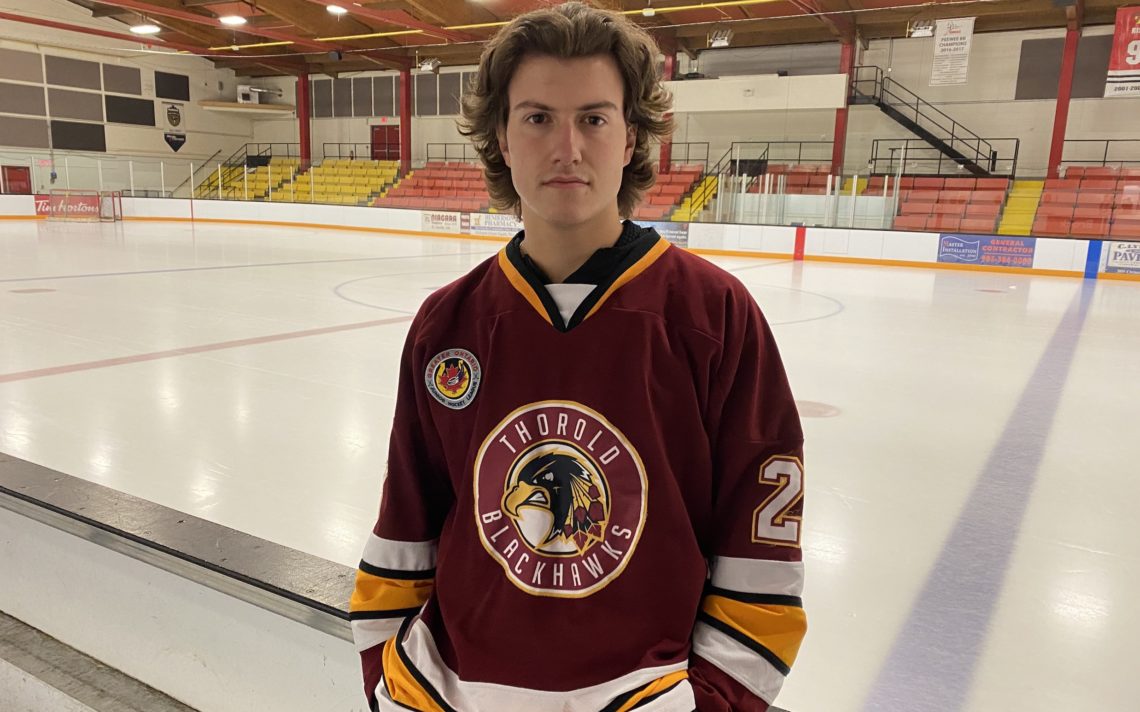 Fortuna ready to shoulder the load

The Thorold Blackhawks are counting on big things from Noah Fortuna this season.

The 19-year-old netminder is heading into his fourth year at the junior B level and Blackhawks head coach Scott Barnes feels Fortuna is ready to take the next step.

“Going into this year, we expect him to be one of, if not the top goalie in the league,” Barnes said. “I think he’s got that confidence.

“He’s learned over the last few years being a 1A and seeing what it takes to play a high number of games in a year. I think this is a year he can really step it up.”

Fortuna, who was acquired by the Hawks from the Niagara Falls Canucks for Anthony Tremonte in swap of goaltenders that has benefitted both teams, posted a 3.08 goals-against average and .901 save percentage in 28 games last season.

“This is my fourth year now so I’ve seen it all, you could say,” Fortuna said. “As I get older, I feel more confident in my game and I’m just going to use that to my advantage and try and help the younger guys on the team and make the most out of it.”

Fortuna shared the netminding duties last season with Chase Grsic, who has moved on to Brantford of the Ontario Junior Hockey League. Rookie Nico Balice, who played minor hockey with Fortuna in Niagara Falls, will act as backup.

Fortuna is looking forward to sharing time with Balice, but admitted he enjoyed the friendly competition with Grsic.

“That’s what Barnes intended for the last few years, two good goalies which I feel is good for me,” Fortuna said. “Always have that guy kind of pushing you from the back. We had a good relationship with each other so we always wanted each other to do well.”

Barnes feels goaltending will be key this season as the Hawks turn over their roster following an off-season that saw a dozen players move on or graduate.

The Blackhawks have been skating as a team for about six weeks. They have been unable to play controlled scrimmages as of yet due to restrictions at Thorold Arena related to the pandemic.

“All the guys, myself included, have been waiting for a while,” Fortuna said. “We’ve been practising for a bit now and we’re getting anxious for games. We really want to play.

“We have a bunch of new guys so it’s hard to get motivated but we’ve done a really good job and made it competitive so now everyone is doing things for each other and we’re trying to get the young guys to do some stuff that will get everyone fired up.”

Barnes is hopeful of playing some scrimmages in Pelham next month and then get ready for the planned regular season start date of Dec. 2, pending government approval.

“That’s what we’re all shooting for,” Barnes said. “Parents ask what we will do if it doesn’t happen. We’re just going to keep doing what we’re doing and figure out a way to get some competitive scrimmages in.

“They are going five-on-five with no hitting. There’s no reason we can’t do this all season long.”