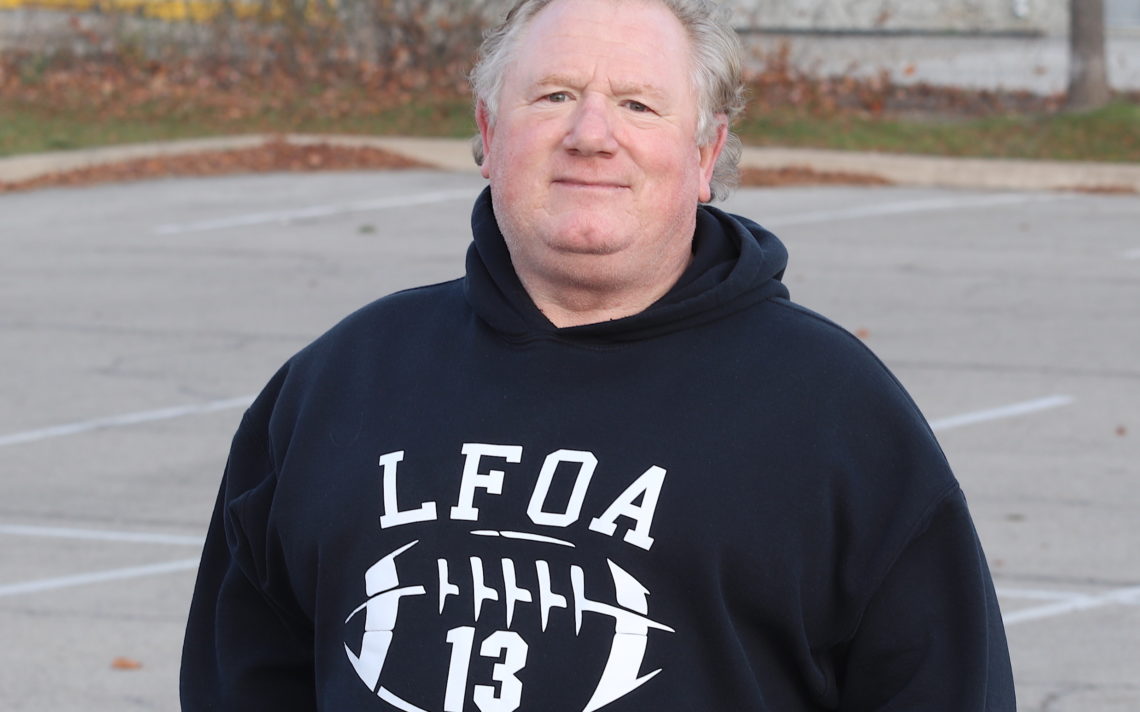 It’s safe to say no one in Niagara has seen more Niagara IceDogs and Notre Dame senior football home games than Tim Strong.

The 62-year-old Port Colborne native, who moved to Welland when he was 13, has been an off-ice official with the IceDogs since their arrival in St. Catharines for the 2007-08 season and has been a volunteer timekeeper for the Notre Dame squad for more than two decades.

With the IceDogs, Strong’s roles have included working as goal judge, in the penalty box and running the scoreclock when the regular clock guy is absent.

“You have the best seat in the house and I like junior hockey. It’s a great perk to have when you get to see guys like (Connor) McDavid play,” said the retired worker at Henniges Automotive in Welland.

And while hockey is one of his delights, his passion for football is all encompassing and takes up a considerable amount of his time.

“I am a little goofier than a lot of the other guys. I do this and I do that,” he said.

The former running back at Welland High and Centennial is heavily involved in football in addition this duties with the Fighting Irish. As the scheduler for the Lakeshore Football Officials Association for the past five seasons, he assigns upwards of 300 games a year. He is sending refs to Niagara, Oakville, Georgetown, Mississauga, Brampton and Burlington.  The LFOA has about 110 officials and that is never enough. It requires a constant juggling act to get officials to every game.

“It’s a little easier for me in the summer because I have more guys available for weekends. It’s when there is high school stuff because during the week between 1 and 2 p.m. it is the hardest time to get officials. You need retired guys or guys who are on shift work,” he said. “When I was on shift work, I would do midnights steady for three months so I could ref high school football at 1 p.m.”

“It’s a thankless job because you have everyone yelling at you,” Strong said, with a laugh. “The leagues and my guys because they are either not getting enough games or why am I sending them there?”

It is also a lot of work.

“I start at the beginning of April and I am on the computer every day trying to put crews together for every league from atom to the men’s league.”

For Ontario Varsity Football League games, he needs to assign six officials and three guys for the stick crew.

“I assign myself to do the timing for Spears games because I still love being there and it’s a good game,” he said. “I enjoy football and getting paid to do it is extra. I would do it for free.”

Strong runs the game clock for the McMaster Marauders football team and served in that same role when McMaster hosted the Vanier Cup in 2016 and 2017. He is also in charge of assigning the stick crews for Mac home games.

“It’s awesome being up in the nice warm press box,” he said.

It’s a far cry from getting drenched with snow and rain during Notre Dame home games, but Strong isn’t complaining.

“I have everything I need to keep me dry and warm and I even had my son with me for a few years when he was at Notre Dame.”

Strong’s long-time involvement with football started with just being a fan.

“I used to go watch high school football all the time and that’s when a couple of the guys that I knew were reffing. They told me that since I was there all the time I should do the clinic and get involved.”

He attended an officiating clinic in the summer of 1996 and has been a member of the LFOA since then. He spent 10 years as an on-field official.

“I loved it and when I was officiating on the field, I treated it as a game too. I would get up at 11 o’clock, have a small lunch, get all my stuff packed and ready because I wanted to go out there and do a good job. The better game you were assigned, the more you were up for it. It was just the same as the kids.”

His on-field officiating was cut short by knee and hip surgeries.

“I thought I was done and I got talking to one of the senior guys and he told me he did lots of timing,” Strong said. “He talked to me about it and I thought I could do that so I started out doing the yard sticks for the X-Men in Welland and the Niagara Spears.”

He then got involved with timing through the association and did 10 years of timing and yard sticks. That led to a stint as a member of the  Hamilton Ti-Cats’ stick crew

“Being on the sidelines for CFL games was great,” he said.

He has always had fun in both his paid and volunteer official’s duties.

“I volunteered to do the world juniors in Buffalo in 2011. I got a jacket but I had to drive back and forth though all those crowds and this and that. I hardly got to watch any of the games because of where iI was positioned. But I enjoy helping out with volunteering for all types of things.”

The LFOA is alway looking for new refs and Strong encourages everyone to give it a try.

“If you love sports and football, it’s a great thing to do. You get a lot out of doing a good game and it’s great exercise.”