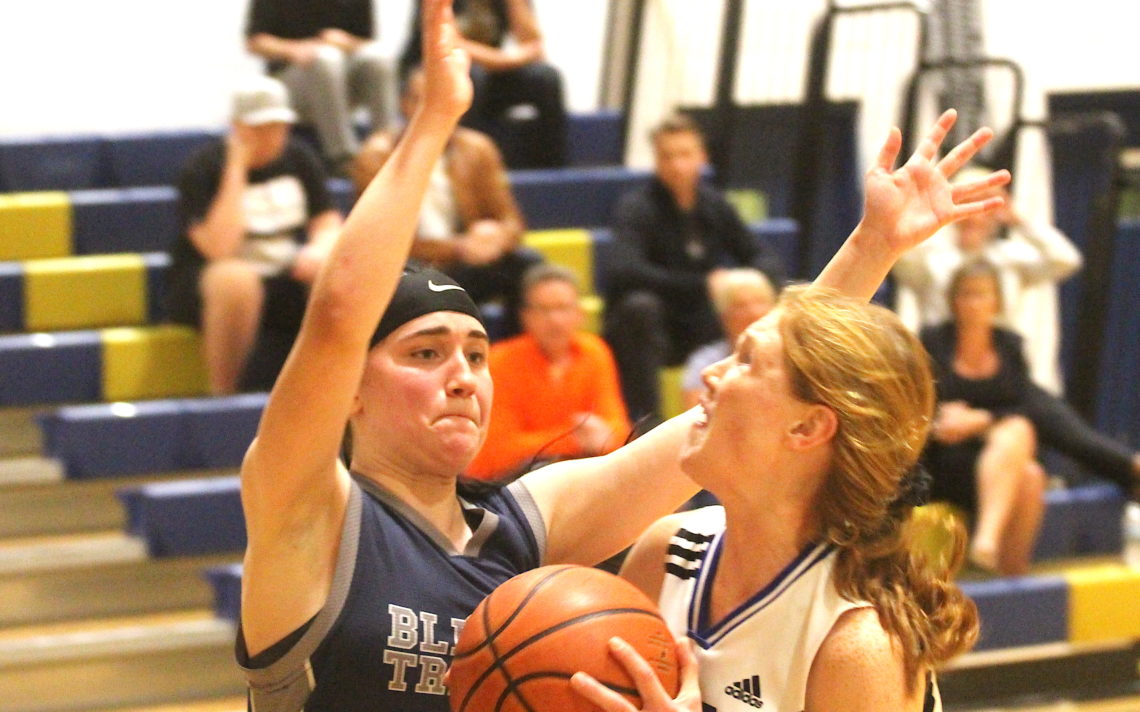 Erika Rouse was having a great game Wednesday in the championship quarter-finals of The First BPSN Girls Basketball Tournament when she fell and bent two of her fingers backwards.

The fall happened in the third quarter and, at that time, the Grade 12 forward had scored 18 points and her Eden Flyers team had a double-digit lead over the Blessed Trinity Thunder.

The 17-year-old had her fingers encased by an icepack and then a trainer taped the two fingers backed together as she watched the Thunder whittle the lead down. When Blessed Trinity tied the game 61-61 with less than two minutes left in the game, Rouse had seen enough.

“She’s very tough and she was out for a bit but she came over and said, ‘Coach, please put me back on.’ I wasn’t convinced but she said she was ready to go so I decided we would try it,” Eden head coach Brian MacIsaac said. “It made a difference because she grabbed a couple of big rebounds.”

Rouse ended up on the floor as the Flyers put the finishing touches on a hard-fought 67-61 victory.

“My team needed me so I just decided to just get back in,” she said. “It (the pain) kills but I will be OK. It’s my last year and I want to make as much of an impact as I can.”

Then Eden’s Avery Cushing recorded back-to-back steals and her team converted a pair of baskets to pretty much seal the deal.

“Avery played great and she had a tough matchup all game,” MacIsaac said. “She is such a perfect point guard. It is a pass-first mentality but you can’t leave her as a defender because she can shoot or she can take it to the basket.”

Eden knew it was in for a battle against the talented Thunder.

“We went in with a humble mindset thinking that they are an amazing team and that we have to bring it,” Rouse said. “We put our best players out first and we ended up bringing it.”

At no point in the game did MacIsaac feel the game was won.

“Even though we had a little bit of a lead, I thought it was close the whole game,” he said. “It seemed like they would go on a run. It happened in the first quarter and the second quarter and then it happened again in the fourth quarter.”

The key for Eden was to not get flustered.

“They have to understand we were playing a team that is easily as good as us and there are going be runs both ways,” MacIsaac said.

The Thunder rallied several times when it looked like the game was slipping away.

“We have a very bright group of girls where I can draw something up and they can do it,” BT head coach Dave Gazzola said. “And then they showed it which was really nice to see.”

The Thunder were hurt when Maddie O’Brien fouled out late in the game.

“She is a key part of the team and we knew that might happen but we didn’t want her to stop playing the way she plays,” Gazzola said.

Wednesday’s game is one that should help the Thunder moving forward in their season and playoffs.

“We can see things we need to work on like the boxouts and the rebounds and also more of the flow of offence,” Gazzola said. “I can see things opening up that weren’t there before and they’re learning.

“They learned a lot in that game even with the loss.”

Mick and Angelo’s/Johnny Rocco’s/Cracker Jacks Players of the Game: Eden’s Erika Rouse with 18 points and a strong game rebounding the ball, and BT’s Lexia Poitras with 20 points.

Molly Taylor netted 15 points Wednesday to lead to A.N. Myer Marauders to a 53-43 victory over the St. Francis Phoenix in the consolation quarter-finals of the First BPSN Girls Basketball Tourney.

“The girls came out with a little more energy today and weren’t as flat-footed,” Myer head coach Paul Grummett said. “We were looking to score, which we need, instead of  playing with complacency.”

Grummett is looking for his team to get better as the season goes along.

“We are young in the backcourt and we’re looking to build for next year and down the road.”

“We had a little bit of a flat start but I liked our team’s hustle,” St. Francis head coach Karly Ruetz said. “Normally with certain girls in, we can really pick the tempo up and we did.”