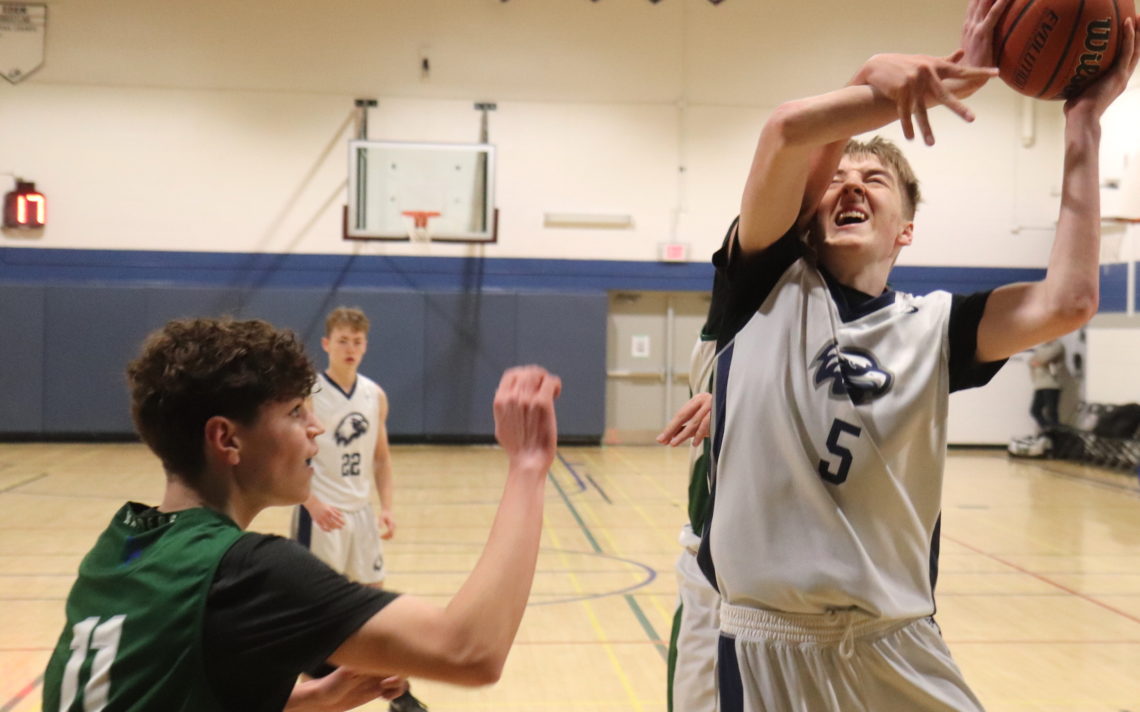 Playing against Holy Cross in the opening game of the BPSN Best of Niagara Boys Basketball Tournament, the Grade 11 player had 12 points, five rebounds, three blocked shots and two assists to power his team to a 77-17 victory.

“Riley is a fantastic player,” Eden head coach Jonathon Thorpe said. “He is the kind of guy who does everything he is asked to do, he works hard all the time in practice and it pays off for him in games.”

The 16-year-old is thrilled to cap the high school season with a tournament.

“We missed a lot of basketball because of COVID and this is our first tournament. We are going to have fun and try our best.”

Stewart plays travel basketball for Thorpe with the Niagara Rangers, along with eight of his teammates on the Flyers, and his team went 2-0 this past weekend in OBL (Ontario Basketball League) action.

“We have been friends since Grade 9 and it is a lot of fun to play with them.”

Fun is the name of the game for Stewart and he’s not thinking about playing at the next level.

“That is not my focus but I keep it in my back pocket,” he said. “I am focusing on high school and having fun now.”

High school hoops is a big part of his basketball lifestyle.

“It is very important to me and all the other guys. We try our best every single practice for two hours.”

Practise has made perfect for Stewart.

“It was hard with the long off-season to keep up my skills but I feel I am better with my finishing, around the rim especially, and I am continuing to work on my three-point shooting as well.”

Eden looked like it had been practising its shooting diligently as it roared out to a big lead with a high shooting percentage.

“We shot the ball really well in the first quarter and it is good to see them go in early,” Thorpe said.

Like his players, Thorpe is excited to see how the BPSN tournament plays out.

“We have been looking forward to it, especially for the Grade 12s, who have missed out on two years of big tournaments. This is really important to them personally and us as a team to finish off the year with some fun.”

There are also some bragging rights on the line.

“Absolutely but we will see how that plays out,” Thorpe said.

As is often the case in a tournament featuring all levels of teams, Holy Cross was glad to get Monday’s game out of the way so it can focus on the consolation round of the tournament.

“I am glad that is out of our system,” Holy Cross head coach Randy Conlon said. “I am not making excuses because Eden is obviously a very good team but we don’t even have a gym. Our school is closed and everything is online. Holy Cross had a flood and we have nowhere to practice.”

Eden didn’t make things any easier on the Raiders as it sank almost every shot it took in the first quarter to build a big league.

“They are a very good team, they are well-coached and they are huge,” Conlon said. “That is not why they are beat us but man they are big.”

Conlon and his team are looking forward to the rest of the tournament.

“I was going back and forth on whether we wanted to play in this tournament but these kids have been through so much in the past two years with COVID,” he said. “They asked if we could go in the tournament and, of course, I said yes. They are wonderful kids and we get another game tomorrow and maybe another one. Hopefully the rust has fallen off a little bit.

“We don’t usually shoot the ball great but we shoot a lot better than that.”