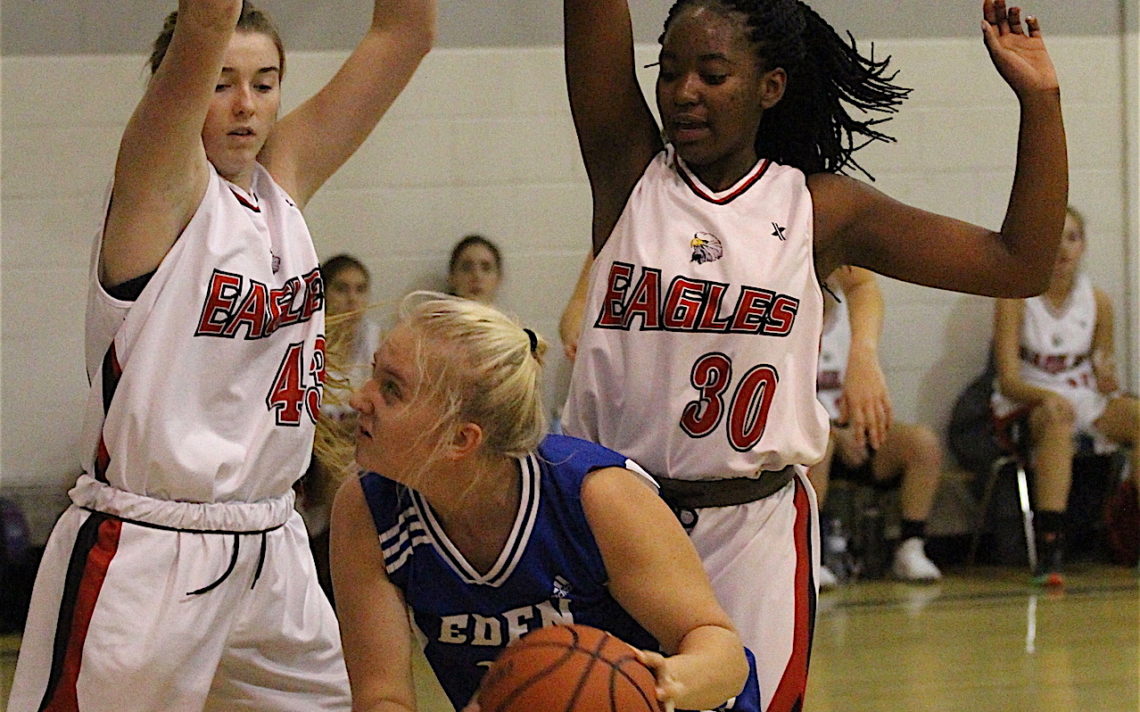 Beth DeBoer is her own harshest critic.

The Grade 11 student at Eden has plenty of basketball experience, but sometimes she struggles with the mental part of the game.

“I feel she is really coming along in terms of her own confidence and not being so hard on herself,” Eden coach Brian MacIsaac said. “Her skill level is there and if she can continue to develop her mental strength, she is going to be a real force as a player.”

The 15-year agrees with her coach’s assessment.

“Sometimes I don’t feel confident in my shot if I miss a couple,” she said. “My mental game has improved a lot lately and I have to believe in myself when I get down and have some resiliency.

“I have stay with it when things aren’t working for myself or the team.”

“Whenever things don’t work, I just go on to the next play,” she said.

DeBoer should be brimming with confidence after her play in Tuesday’s game. She was a perfect 8-for-8 from the free-throw line in the final 56 seconds of the game to help fight off a determined Grimsby comeback.

In addition to her offensive exploits Tuesday, DeBoer had the unenviable task of defending Grimsby sharpshooter Paige Epp.

“She is a great shooter,” she said.

Once the high school season is over, the former JUEL prep player will settle into a role as a practice player with the JUEL team.

“It will make me stronger and if someone gets injured, I may get to step in. It will be a good growth year and I am OK with it,” DeBoer said.

Eden nows moves on to play the unbeaten Sir Winston Churchill Bulldogs in the Zone 4 final Thursday at 3:30 p.m at Churchill. The Bulldogs defeated the Flyers 54-42 in regular-season action.

“They have some key players — some JUEL players and some JUEL prep players — so we are going to have to play tight on those players the same way we did against Grimsby,” DeBoer said.

Epp led Grimsby led Grimsby with 25 points, including 10 points in each of the second and fourth quarters. Other top scorers for the Eagles were Ilijana Vukovic (10) and Asha-Lee Crooks (8).

Grimsby never gave up in Tuesday’s semifinal and kept making runs to keep the game close.

“We expected a real tough game and they have two really strong offensive players that we tried to key on,” MacIsaac said. “Some of their other players came through and made it a tight game.”

Eden was missing a starter and also had to deal with another starter, Mackenzie Schroeder, being in foul trouble.

“Our team has been a team all year in the true sense of the word and kids came through and did some little things that helped us pull it out at the end,” MacIsaac said.

Grimsby coach Erika Smith was disappointed with the loss but not her team’s effort.

“Our girls persevered and that’s what they have done throughout the season,” she said. “Our toughest games have been against Sir Winston and Eden and once we’re down a few baskets, our priority is bridging that gap and getting back in.”

It certainly helps to have a shooter like Epp when a team is in comeback mode. The Grade 11 guard hit six threes in the game and has NBA range on her three-point shot.

“Once she gets going, there’s absolutely no stopping her,” Smith said. “If you’re in her face, she will shake you off and get the basket. And she’s not afraid to be five feet back of the three-point line.”

The Sir Winston Churchill Bulldogs advanced to the NRHSAA Zone 4 senior girls basketball finals with a 53-22 victory over the visiting Governor Simcoe Redcoats.

Top scorers for Simcoe were Allison Addy (8) and Hannah Parkin (4).