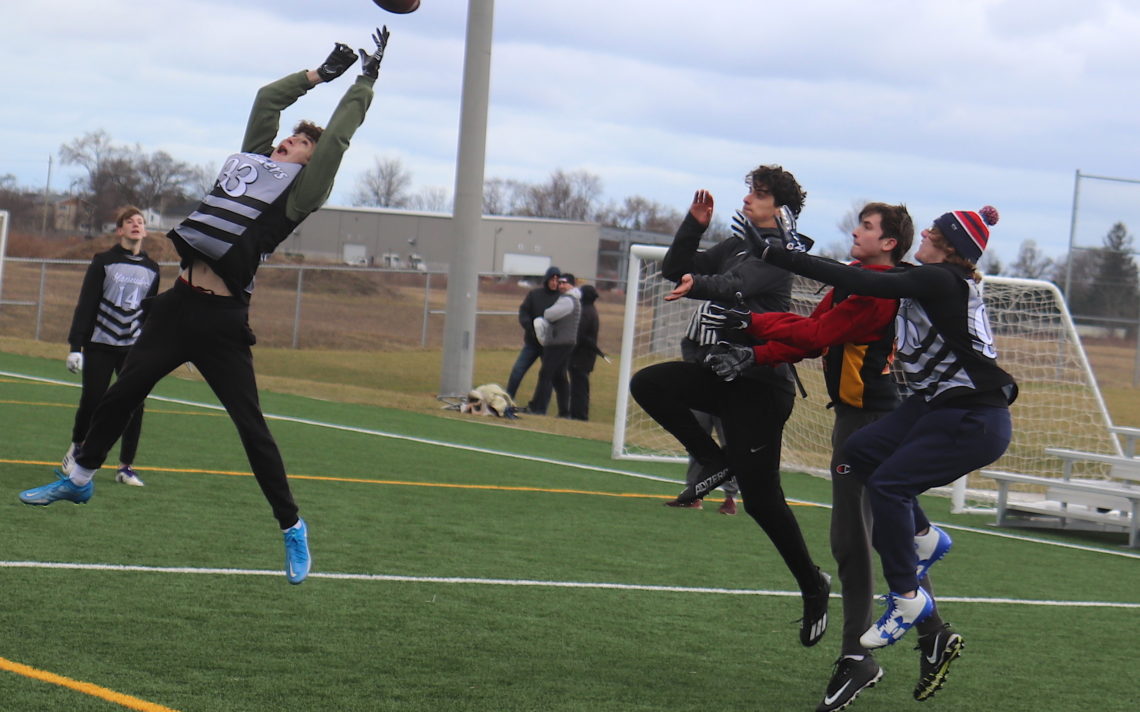 Count Josh Horton among the disciples of flag football.

“Touch football is great,” said the Grade 11 student at A.N. Myer, who is taking part in Niagara Youth Flag Football’s high school league. “It is everything and it is what I look forward to on the weekend. And we are training for next season. I am going to be centre next season for the first time so it’s great that I am able to come out here every week and practice playing centre against real competition.”

“I don’t have the linemen that I would have in tackle but it is the exact same speed because we have rushers. Nothing changes except the plays.”

Horton is having a blast.

“It is awesome. I love the competitiveness. I am a very competitive person and so is everyone else here and that is what they are here. That’s the sport of football.”

A.N. Myer has three teams participating in the league, including a Grade 9 team, a mostly Grade 10 team with a few Grade 11 players and then a team made up of Grade 11 and 12s.

“First and foremost, it is fun and it gives them an opportunity to get out and play,” he said. “St. Catharines Collegiate has a team too and kudos to Nathan Greene. He has done an amazing job.”

Buchanan sees only benefits for his players who compete in the league.

“It allows us to evolve in the passing game and it helps us win the rep game,” he said. “Kids have fun, they get better at throwing and catching, they get better at defensive back work and understanding the game itself. There are also some opportunities to go into tournaments which is fun for them and after that it is a lifelong activity.”

Buchanan has experienced that last point.

“A lot of the coaches here have played touch football for a lot of our lifetime. Now the kids are understanding,” he said. “They have seen some tournaments for the men’s league and they know they can play for a long time. We are so thankful that Matty Hill is offering this league for us.”

The high school league is made up of 10 teams, six at the senior level and four at the junior level. In addition to Myer and Collegiate squads, NYFF has an alumni team with kids from all over, including a couple of talented Grade 8 players, and there are also squads from Hamilton.

“The topnotch teams from Hamilton come down because they know they will have really good competition in Niagara,” said NYFF founder Hill.

He describes the calibre of play as phenomenal.

“Right now in our senior league, we have three quarterbacks who have committed to play university football, including Myer’s Drake Somerville and a lot of other university prospects,” he said. “It has been really good football and they are all understanding five-on-five touch. They have been picking it up quick and it has been fun to see.”

The league has evolved from last season.

“The best part of it has been the friendly competition,” Hill said. “The first time we did this the guys were really physical and they were beating up on each other thinking it is tackle. Now it is a friendly competition, there is respect and these kids are getting so much better.”

He has seen first-hand how touch football is influencing the high school game.

“The passing games are really evolving.”

Playoffs will start next weekend and by the time all is said and done each team will have played at least 10 games.

“The reason why it is ending is because we want to finish up before tackle season. A lot of these guys are going to be playing (Niagara) Spears and Hamilton Junior Ti-Cats,” Hill said. “The goal is to get them ready.”

Hill doesn’t have any grand plan as to where he wants the high school league to go.

“A lot of these high school kids actually coach and ref in my leagues so it gives them an opportunity. It is also a pathway for the kids in the youth leagues if they don’t want to play tackle. We have 500 kids in our youth leagues now.”