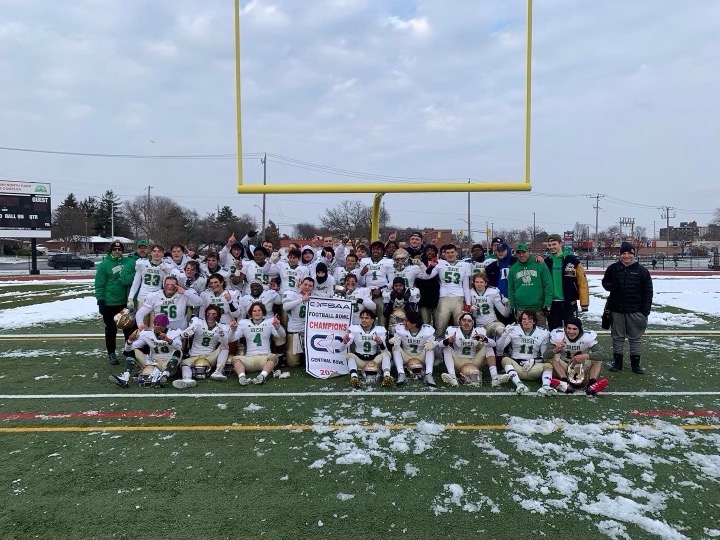 After losing 57-7 to St. Thomas More in the 2017 Golden Horseshoe Bowl and 47-6 to Chaminade College in the 2019 Metro Bowl, the Southern Ontario Secondary Schools Association champion Irish thumped North Park Collegiate Trojans 50-7 in the Central Bowl Tuesday afternoon on a snowy Bison Field in Brantford.

The Central Western Ontario Secondary Schools Association champion Trojans came into the game with an unbeaten 7-0 mark but were no match for the Irish who improved to 8-0 with the victory. Notre Dame led 36-0 at the half and 50-7 after three quarters.

Tal Ibrahim scored five touchdowns to lead the attack for Notre Dame, quarterback Marshall McCray added a one-yard TD run after setting it up with a 60-yard TD run and Dayshawn Johnson added a 62-yard pick six. It was Johnson’s third long interception return for a TD of the season.

Ibrahim’s five-TD outburst came less than a week after he separated his shoulder in the SOSSA Bowl win over Westmount.

“I padded him up before the game and we have been working with it all week to make sure it was good,” Notre Dame head coach Tim Bisci said. “He ran hard and he said he didn’t feel it but I am sure he was pumped up with adrenaline. After they scored, he ran over a couple guys and scored from 40 yards out just to answer.”

Notre Dame’s defence was the key factor in the game. North Park’s only score came on a kick return.

“They have been running the ball hard. We put in a new defensive front for this game and we went right at them,” Bisci said. “They couldn’t move the ball on us and we played physical today.”

Notre Dame’s coach has been preaching for his team to play physical for several weeks and that message has sunk in.

“Our kids showed up and played physical.”

The Irish just kept getting better and better as the season wore along.

“The kids bought in, they wanted to win and it didn’t matter what is was or what job it was we wanted them to do. They wanted to do it and they got the job done.”

“I told the kids that sometimes you dream about things and the moment happens and it is not as good as the dream,” Bisci said. “This was a case of the moment being way better than the dream.

Winning an OFSAA Bowl requires a great team, a little bit of luck and a favourable matchup.”

“I think this team is good but we went into the bowl game two years ago against Chaminade and we had played four games in November and they hadn’t played yet,” he said. “It was our 11th game to their sixth and we were beaten up. That was a little bit of luck on their part and they were a good team.

“This time we went in and we were a little bit fresher. We were a little bumped and banged up and that team hadn’t played since Nov. 12 which was concerning but our kids held it together and they played tough.”

There is no secret to the program’s success.

“If anyone tells you anything differently they are crazy. It’s the kids,” Bisci said. “It is having kids that buy in, who are athletic, big and strong, and who do things in the off-season. That is what it is.

“When you get a run of this length, it is because you are getting quality athletes. We were unlucky for a while and now we are lucky.”

Notre Dame’s bowl victory was the first for a Niagara school since Myer won the Central Bowl in 2016, the Independent Bowl in 2015 and an unnamed OFSAA Bowl in 2014.

The Irish are hopeful their run of success can continue in 2022.

“We have a group of 12 who are talking about coming back and if they come back we could put together a pretty tough team next year,” Bisci said.