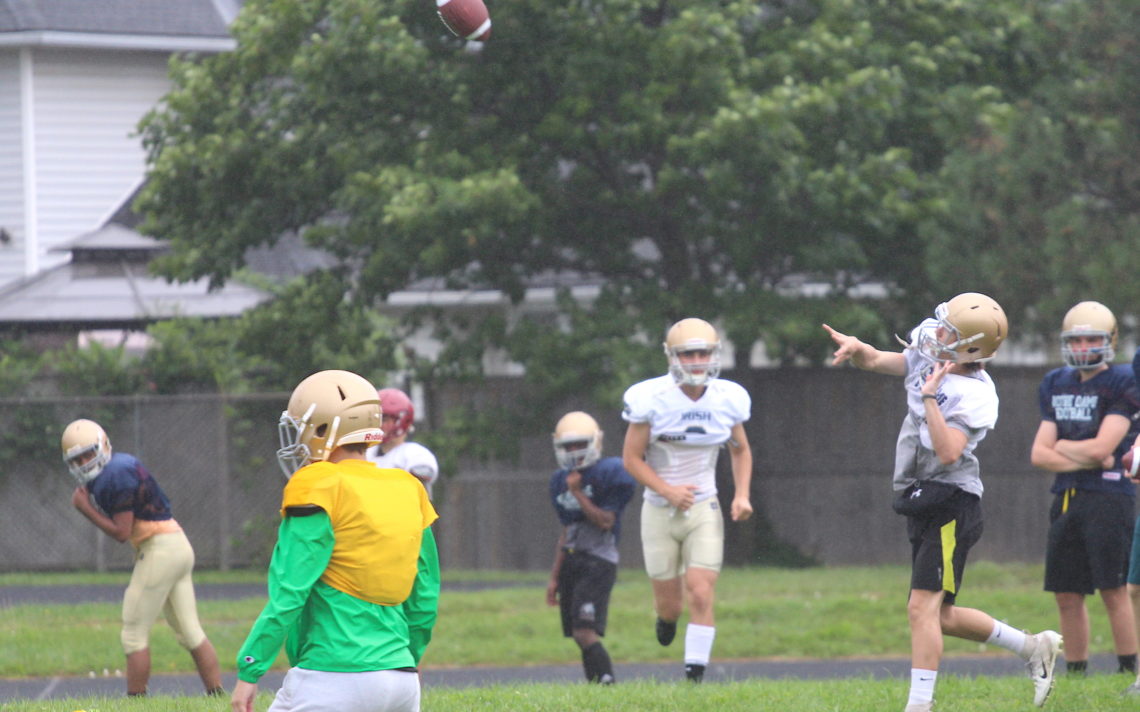 The Fighting Irish outscored its opposition 194-14 during an unbeaten 2019 regular season before coming up short on their sloppy home field.

“The kids have been talking about it since last November and hopefully they have that little fire in them and want to get going,” Bisci said.

Notre Dame was the defending Niagara and Southern Ontario Secondary Schools Association champion, but after the loss to Saint Paul, Bisci was blunt with the assessment of his team.

“We weren’t ready to play and I think we kind of got used to reading our newspaper clippings and thought that we were better than we were and didn’t have to work at it.”

One year later, he feels the same way.

“People have asked me about it a bunch of times and I think it was a couple of things.

“And two, the league was a little bit off last year. Three of the six games we were up 35 at the half and we were pulling guys out. We couldn’t get a rhythm going for the season.”

In fact, the Irish led the last three of its regular season games by 35-0 at the half after having tighter games the first three weeks of the season.

“The year before, we had games where we had to keep guys in and we had to fight and they got the edge going. Last year, we lost the edge,” Bisci said.

He’s vowing to not let it happen again.

“We learned from that and we are going to play our guys and hopefully we can get that edge going,” he said. “I think the league will be better and last year was just one of those years that it wasn’t as good a league.”

“We will be ready this year because Saint Paul will be tough and they have basically their team back, BT will be tough again and I think Saint Francis might be very good too,” Bisci said.

The Fighting Irish won’t be too shabby either with the return of all-stars and impact players like Hunter Cropper, Zack Melnyk, Gerrid Holton, Jacob Snider, Dylan Backos and Jacob Succar.

“We have a good core group that is back and they are fired up and ready to play,” Bisci said.

Succar is the key to the offence.

“He was the league offensive MVP last year and we are going to go the way he goes,” Bisci said. “Hopefully, he’s ready to go and can help us establish the run and we can throw the ball a little but more, That was one of the keys from last year. We didn’t throw the ball as much as we wanted to.”

Last year, the Irish lost starting quarterback Connor Cropper in the first game of the season and younger brother Hunter, a wide receiver, stepped in to fill the role. Hunter is a lot more comfortable in the role now and looked sharp in helping the Irish win the seven on seven football tournament at Saint Paul.

“Hunter had embraced the role this year and hopefully with Succar there it will give him confidence to throw the ball a bit more,” Bisci said.

Succar and his teammates are trying to take a different look at last year’s championship setback.

“We kind of put a positive focus on it and we are trying to be a better team this year,” the 16-year-old said.

A better team will require more effort and commitment.

“Last year, we didn’t practice as much and didn’t come to as many practices as we needed to,” Succar said. “This year, I am hoping we can change that mindset and push forward.”

He is confident the Irish have the personnel to contend for a championship.

“I know a lot of the guys coming back have put in a lot of work,” he sad. “I work out with a lot of them and it has also helped develop some chemistry.”

The 5-foot-11, 170 pounder wants to do whatever he can to help his team win and that will include taking on more of a leadership role.

“I want to be a leader because our team needs a leader, especially for the younger guys on the team,” the Grade 12 student said. “They need someone to look up to.”