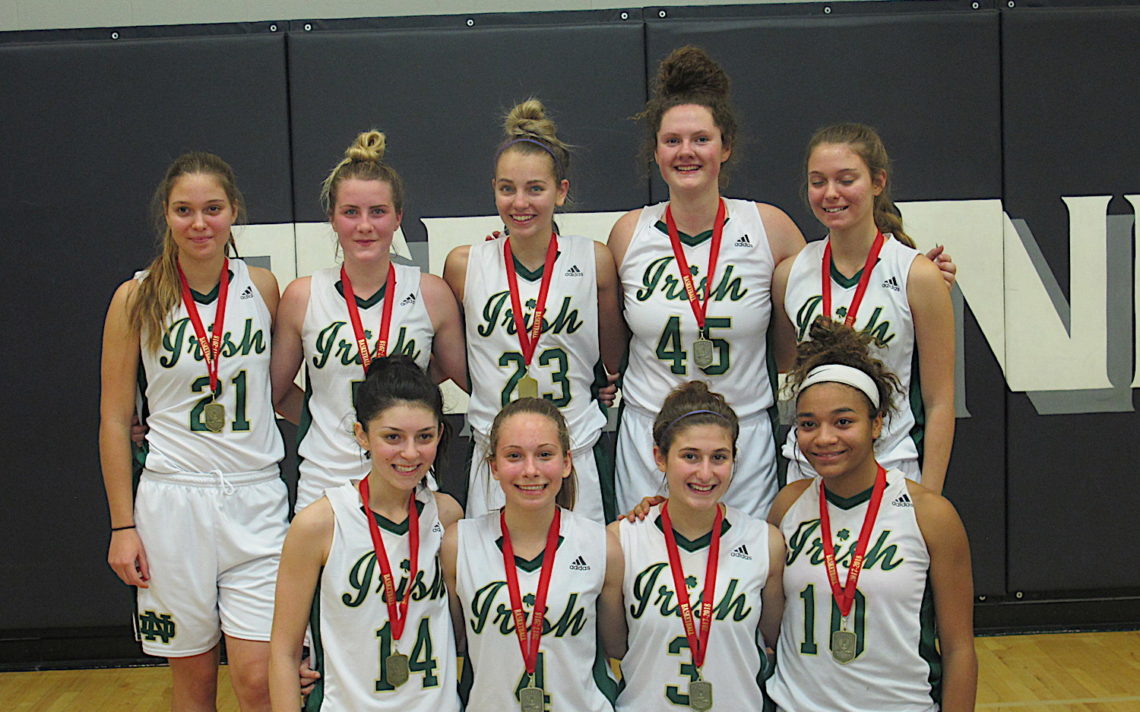 The Welland Notre Dame Fighting Irish have advanced to OFSAA next week in Guelph. PHOTO BY: BILL POTRECZ

The third time proved a charm for the Notre Dame Fighting Irish.

After dropping their last two SOSSA finals to Sir Winston Churchill and Waterdown, the Irish punched their ticket to the provincials with a convincing 68-46 triumph over the Westdale Warriors at the Southern Ontario Secondary Schools Association senior AAA championship final Thursday at Blessed Trinity in Grimsby.

The Irish advanced to the finals with a 49-26 win over Blessed Trinity in the semifinals.

Westdale topped the Denis Morris Reds 61-39 in the other semifinal.

The Irish now advance to the Ontario Federation of School Athletic Associations (OFSSA) playdowns in Guelph next week.

“I think with our past experience, we knew how to overcome and how to approach this game.”

The Irish raced out quick 18-4 lead which immediately took some of the pressure off.

“It’s always nice to play with the lead and carry that through,” Barbatano said. “When you play and you’re down you can start to panic a little bit and the game becomes a little bit more difficult.”

One of the big reasons for Notre Dame’s quick start was the work of forward Chloe Peters, who led the Irish with 25 points, including eight points in the first quarter and 18 overall in the first half. Notre Dame took a 41-17 lead at the half.

“They all played well but she played (well) inside and out,” Barbatano said of Peters. “Her shots were falling from the outside and she was making her post-up moves against a good player. It was really important for us.”

Peters was ecstatic when asked about her game and the fact the Irish are OFSSA-bound.

“It’s amazing. It feels really good,” said Peters, a 15-year-old, Grade 10 student. “We knew it was going to be tough coming in and they had some good bigs (big players) we didn’t see much of during the season.”

Peters said the Irish did a good job keeping on a even keel heading into the game.

“We have confidence but we never want to get too cocky and think too much of ourselves,” she said. “We knew it was going to be a good game.”

Peters was thrilled to be able to contribute so much to the victory.

“It felt really great. I try and start inside and get my post game going and then move outside and work on my shot,” she said.

Peters doesn’t seem the least bit satisfied just to get to OFSAA.

“We’re definitely going to go there to try and do well,” she said.

“You look back at the St. Mary’s Tournament and we played very well against some good teams,” he said. “I think they know they can compete there so that’s important as well. We have to have a great practice before we go and put it back to reality and make sure we are focused when we are there.”

In the morning semifinal, Peters netted 10, Ciolfi nine, Picton and Turko eight each.

In the Reds loss to Westdale, Lexxus Bell had 12 while Emily White and Danielle Orlando added eight each. 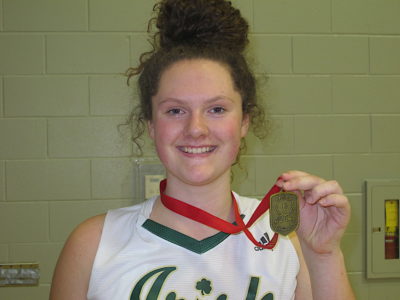