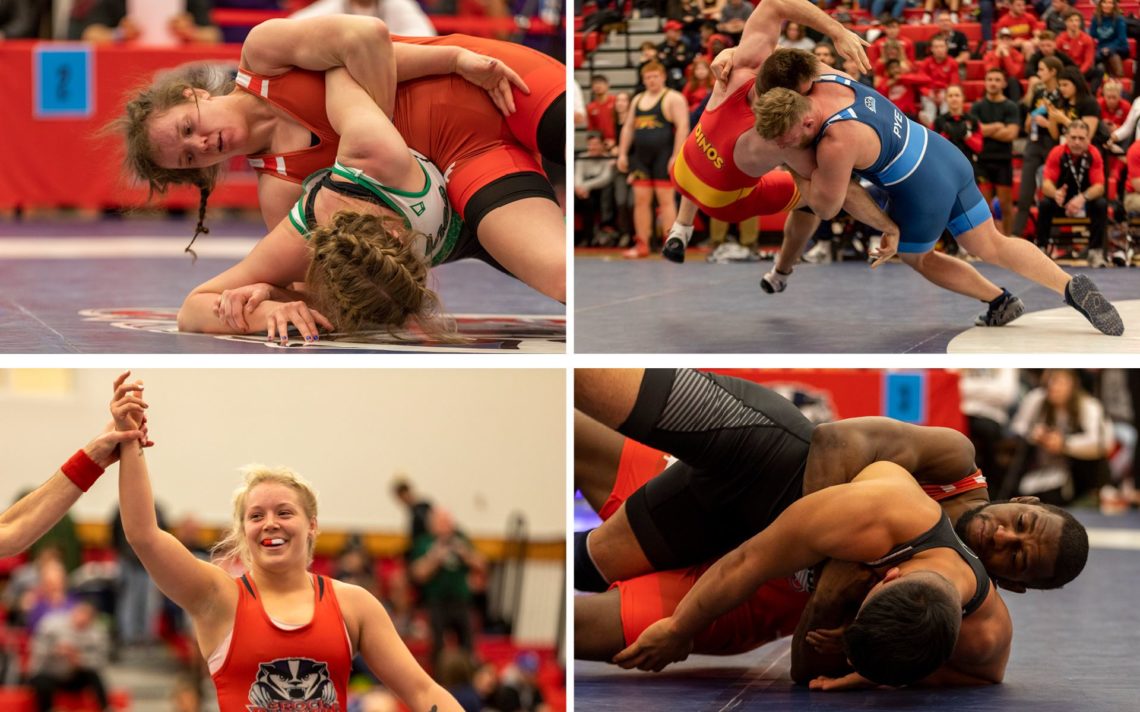 Kuebeck, a fourth-year kinesiology student, won her first national gold medal at the 2020 U SPORTS Wrestling Championships at Brock Feb. 22. Kuebeck defeated Andrea Franko (Alberta) and Kara Nixon (Lakehead) en route to the gold-medal match where she outlasted Maddison Haney (Saskatchewan) for 52 seconds before Haney exited with an injury.

Steffler, a fifth-year student who is studying for her Master of Professional Kinesiology, was awarded the U SPORTS Outstanding Wrestler award after winning her first gold medal at the 2020 U SPORTS Wrestling Championship. Steffler defeated Amy Bellavia (Calgary) by a 12-5 decision in the gold-medal match. She also overcame Angela Aalbers (Saskatchewan), Jayden Sparks (Guelph) and Laurence Beauregard (Concordia) in the semifinal match.

Manning, a fourth-year psychology student from St. Catharines, captured his second U SPORTS gold medal during the national championships at Brock over the weekend. Manning won by tech fall over Connor Quinton (McMaster) by a score of 11-0 to capture gold in the men’s 68 kg. final. Manning defeated Ali Rahguzar (Fraser Valley), Bryce Davis (Algoma) and Drew Coldwell (UNB) on his road to gold.

Pye, a fourth-year psychology student, won his second national gold medal at the 2020 U SPORTS Wrestling Championships at Brock on Saturday. Pye won by tech fall over Jasonpreet Bains (Fraser Valley) by a score of 11-0 in the men’s 100 kg. final. Pye defeated John Campbell (Lakehead), Jeremy Poirier (Concordia) and Steven Sheppard (Calgary) in the semifinal bout.

Below are BPSN’s stories on the U SPORTS championships:

The No. 7 Badgers pulled off a comeback late in the fourth quarter to oust the No. 6 Windsor Lancers from the OUA women’s basketball playoffs.

The Badgers edged the Lancers 61-57 during the OUA quarter-finals at Bob Davis Gymnasium on Saturday.

Brock advances to face the Western Mustangs in the Critelli Cup semifinals in London on Wednesday, Feb. 26. 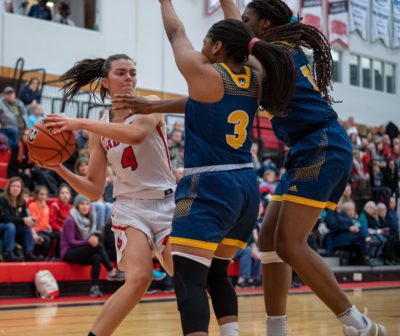 Trailing by 19 points going into the final quarter, the Badgers kept their composure and outscored Windsor 29-6 in the final frame to clinch the victory.

“This was a great team effort,” Brock head coach Mike Rao said. “We played a much more physical game today and then we started to board in the second half.”

The Badgers lost the third quarter 21-10, but roared out of gate in the fourth and shut down the Lancers’ offence.

“The spark tonight was everybody,” Rao added. “We played with a lot of heart.”

Melissa Tatti led the team with 20 points and Kristin Gallant registered several key buckets in the fourth en route to a total of 13 points, including seven rebounds.

The men’s basketball team’s season came to an end Wednesday.

The Badgers were knocked out of the OUA Wilson Cup playoffs with a 83-71 loss to the McMaster Marauders in Hamilton.

The Badgers finished fourth in the OUA Central with a 12-10 record.

The men’s hockey saw their season come to an end following a 2-1 overtime loss to the Guelph Gryphons.

With the victory the Gryphons swept the best-of-three series 2-0.

Neither team was able to find the back of the net in the first two periods of the game. 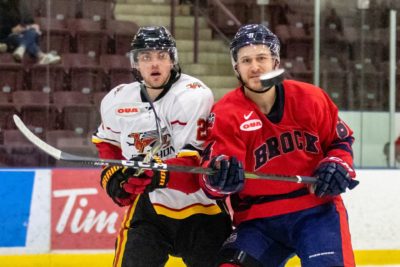 “We had some opportunities,” Brock head coach Marty Williamson said. “It was spread out; they would take it to us for a little while and we’d be able to bounce.”

The Gryphons opened the scoring 15:45 into the third with a Bobby Dow goal. Brock’s Jared Marino answered back 39 seconds later to tie the game.

It would be Guelph’s Luke Kutkevicius scoring the game-winning goal in overtime.

“Awfully proud of how hard they played and that we were able to comeback and push it to overtime,” Williamson said.

Jordan Maletta and Johnny Schaefer picked up assists for the Badgers

Brock’s goalie Mario Culina made 39 saves and Brendan Cregan had a 24-save performance in the win for Guelph.

The Badgers lost Game 2 of the quarter-finals 3-2 to the Ryerson Rams at Mattamy Athletic Centre in Toronto.

Brock enjoyed one of their most successful seasons and posted their highest win total (13) since the 2010-11 Badgers won 19 games. 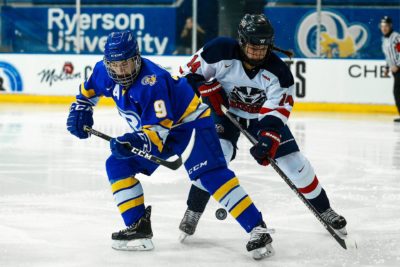 “We have a bright future with this young group and a lot of thanks to our graduating players for guiding them,” head coach Margot Page said. “We’ll have a couple weeks off and then get back at it.”

Every match between Brock and Ryerson was a one-goal game this season.

The Rams opened the scoring in the first period, but Brock replied with back-to-back goals from Claudia Murphy just four minutes apart to give the Badgers a 3-2 lead in the second.

Ryerson capitalized with a power-play goal with less than a minute remaining in the frame.

Brooklyn Gemmill scored the game-winning goal for Ryerson during the man advantage. Gemmill also recorded the game winner in Game 1.

The men’s volleyball team punched their ticket to the playoffs for the first time in team history.

Brock finished fourth in the OUA West with a record of 7-10. 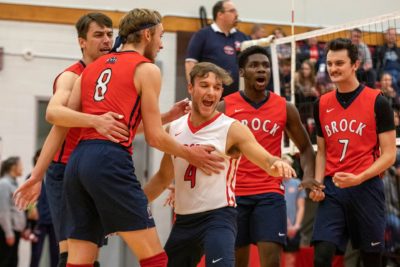 The Badgers came into the match trailing the Mustangs in the OUA West standings by one win for the final playoff spot.

“We followed the game plan to a T and we put down some of their major attackers through the middle and on the pins,” Ragogna said. “We served tough, but we’ve been doing what we’ve been doing all year and it paid off for us in this game.”

Peter Schnabel hit for 10 kills, zero errors on 14 swings for a kill percentage of .714 while Mark Naqvi put on an all-star performance for the Badgers with timely kills (five), serving, attacking and blocking (four).

“Those two were ridiculously good tonight,” Ragogna said. “Our middles were unstoppable. The contributions from Logan House (12 kills), Saulius Lianga (six) and Dean Globocki (five) were all efficient from the pins. Ethan Kalef was all over the court while Marcelo Muniz Correa had a really clean game.”

Austin Janzen also stepped in with a couple of big plays while contributing for a handful of positive side outs for Brock.

The OUA playoff dates and times to be determined, but it’s likely the Badgers will play the Toronto Varsity Blues (16-1) in the quarter-finals.

Ahead of the OUA playoffs, No. 7 women’s volleyball closed out their regular season with a road loss to the No. 10 Western Mustangs. 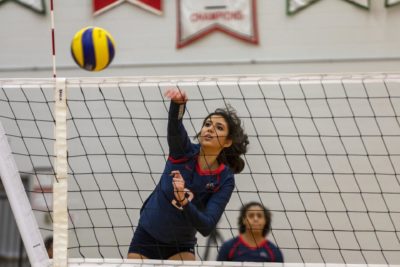 The Mustangs received 16 kills from Carly Kimmett and Melissa Langegger had 12 kills.

Badgers end the season with a 14-5 record, one win better than a season ago.

The Badgers still earned the number No. 1 seed in the OUA West despite back-to-back losses, and will host a quarter-final match Feb. 29 at the Bob Davis Gymnasium with their opponent and game start time still to be announced.

A Brock swimmer was recognized for her community service work at the national university swimming championships in Victoria, BC on Saturday.

Badgers team captain Celine Funk was awarded the 2020 U SPORTS Female Community Service Award for her efforts at Brock and the wider Niagara community.

A trio of Brock Badgers – Maggie Smith (competed in the prelims for 50-metre breaststroke, 100-metre butterfly, 100-metre backstroke), Gokhan Bozyigit (11th in 1,500-metre freestyle) and Anthonie Korstanje (13th in 200-metre breaststroke) competed at the U SPORTS Swimming Championships hosted by the University of Victoria at Saanich Commonwealth Place.

Funk, a fourth-year swimmer from New Hamburg who is studying Medical Sciences, won the national award after earning the OUA Community Service Award on Feb. 9.

“This award really means a lot to me,” Funk said. “I love getting involved with in the community and it was really nice to get recognition for all the work I’ve done.”

“Celine has always managed to find time to give back to the community, even with her challenging Medical Sciences program,” head coach Peter Bradstreet said.

Now in her final year at Brock, Funk boasts near-perfect practice attendance over four years as a varsity swimmer and was selected as a team captain for this season.

She enjoys serving as a mentor with the Brock University IMPACT programme, which varsity student-athletes are partnered with at-risk youth in Niagara as identified through the Niagara Regional Police, or through the local school boards. The mentors work one-on-one with the youth weekly.

Funk also takes part in annual charity fundraising events each year in Niagara, including Relay for Life and the CIBC Run-for-the-Cure.

In the pool, she volunteers as a coach with the local Special Olympics swim group once a week and coaches novice 7-12 year-old swimmers twice each week as part of the Brock ‘Olympic Way’ programme.

Bozyigit continues in full training and will compete at the Canadian Olympic Trials from March 30 to April 5 in Toronto.