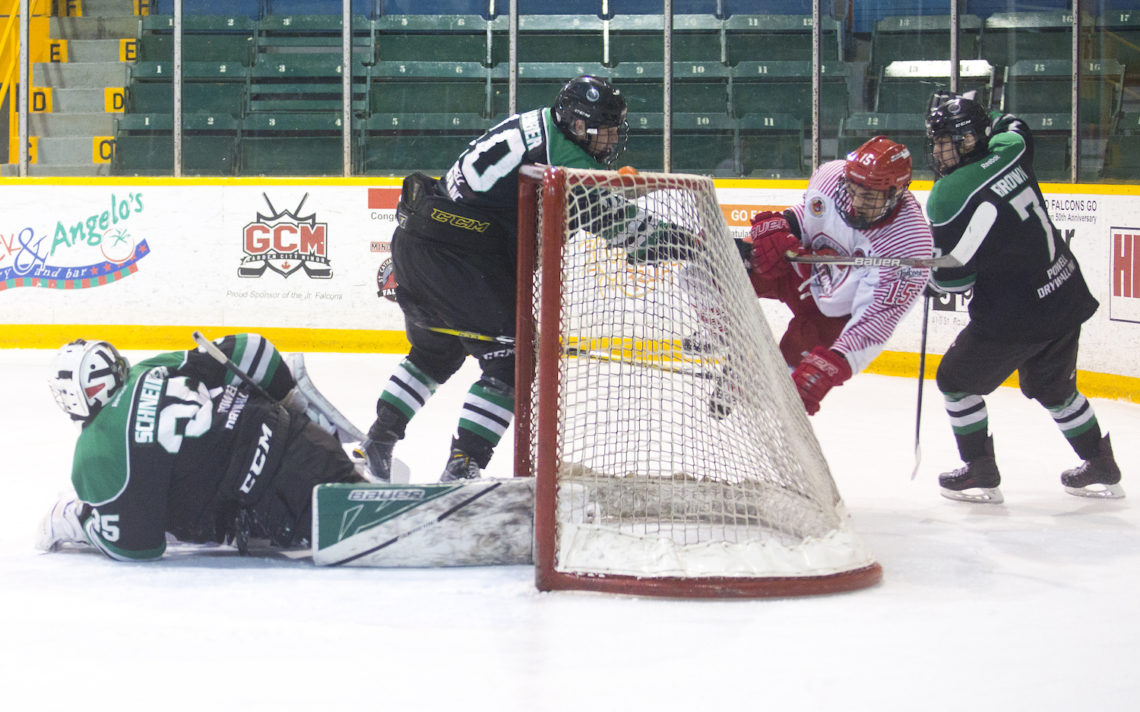 The St. Catharines Falcons edged the Pelham Panthers 4-3 in overtime to take a 3-0 lead in their best-of-three series. Photo Special to BPSN Sports

The rookie winger was held off the scoresheet in the first two games of the series, but buried the winner eight minutes into overtime Tuesday as the St. Catharines Falcons edged the Pelham Panthers 4-3 in a Greater Ontario Junior Hockey League, Golden Horseshoe Conference best-of-seven quarter-final playoff round game at Jack Gatecliff Arena.

The Falcons now hold a commanding 3-0 lead and can advance to the semifinals with a win in Game 4 Thursday in Pelham. Game 5, if necessary, is Friday back in St. Catharines.

Adams described the goal which saw him deflect a shot from the point past Pelham goaltender Eric Schneider, who turned in a brilliant performance making 40 saves.

“My line of Dakota Miskolczi and Liam Dunda were cycling the puck and got it up to Arber (Xhekaj) and he got it over to Tyler MacArthur and he shot it and I just deflected it,” Adams smiled.

Adams figured the winner would like come as the result of hard work and going to the net versus a highlight-reel type of goal.

“In most cases, just everyone go to the net and shoot,” he said. “Just bear down and bury the puck.”

The Falcons outscored the Panthers 13-2 in the first two games of the series, but had their hands full wth the hard-working Panthers who played their best game of the series and could have emerged with a win.

“I think we may have come out slow but towards the end we picked it up,” Adams said. “We just have to out-work them. With the group we have we’re talented enough to win games but we have to have the work ethic to beat every team, every day.”

Falcons general manager/coach Frank Girhiny had a simple explanation for the difference between Games 1 and 2 and Tuesday’s matchup. 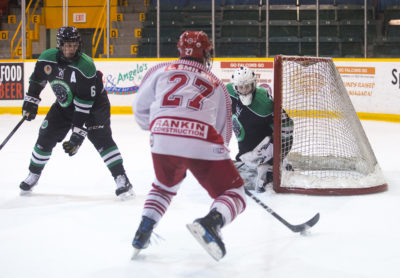 “They’re playing for their lives,” he said. “We’re up 2-0 and they’re down 2-0. I didn’t think we matched their intensity very well until the third and overtime. I thought we had a really good third and really good overtime.”

The Falcons were pressing for the equalizer and finally tied it when Tristian deJong scored a power-play goal with just over a minute to play. The Falcons were on the power play when Schneider was called for knocking the net off, something that occurred several times.

Schneider felt he was interfered with on the play and broke his stick and knocked the net off following the goal.

“It’s pretty tough playing five on seven,” Barrick said. “Anybody that wants to watch a tape and I get the excuse from the referee that our defenceman pushed him in and he’s rolling around the crease with our goaltender while they put the puck in the net  . . . It should have never got to overtime.

“Our guys worked our . . . off for that to be the result of a hockey game. That was pathetic. They should be ashamed.”

St. Catharines took a 2-1 lead after one period on goals by Matt Busby and Liam Dunda sandwiched around a power-play goal by Noah Caperchione. The Falcons held a 13-10 edge in shots.

The Panthers tied the game at 19:59 of the second on another power play when Jared Hill scored. Officials met to discuss whether the puck had crossed the line before the 20-minute mark and called it a goal although they did not order a face off to finish off the period.

There was a steady parade of players to the penalty box in the period. The Falcons were assessed four minors and the Panthers three.

Pelham grabbed a 3-2 lead when Caperchione netted his second with about 12 minutes to play in the third.

“I thought we had a lot of chances we missed on and we told the guys to stay with it but we got a little frustrated. It’s all about perseverance and staying with it and you saw the domination in the fourth period,” Girhiny said.

Following the game the Panthers filed a protest with the Ontario Hockey Association based on a game official’s interpretation of a rule that causes the other team to have a distinct advantage.

The protest was denined Thursday afternoon.

The Niagara Falls Canucks took a 3-0 lead in their series with the Thorold Blackhawks with a convincing 8-1 victory at the Gale Centre.

Daniel Lowe replied for the Blackhawks.