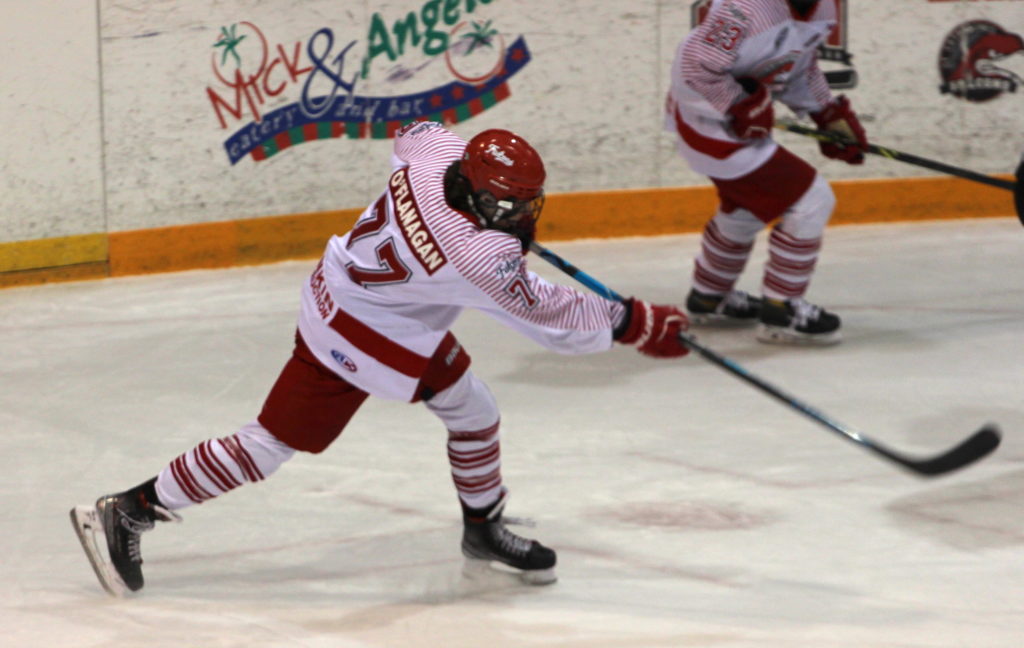 Falcons take out Maroons in overtime

Logan O’Flanagan scored the winner Tuesday in overtime as the St. Catharines Falcons edged the Chatham Maroons 3-2 in Chatham in the opening game of the Sutherland Cup round-robin playoff series. File photo by: BILL POTRECZ

Logan O’Flanagan continues to be clutch for the St. Catharines Falcons.

The speedy winger netted his seventh goal of the post season, 2:53 into overtime, to give the visiting Falcons a 3-2 victory over the Chatham Maroons before 875 fans in the opening game of the Sutherland Cup round-robin playoffs.

“He’s been a great contributor in the playoffs for us,” Falcons coach Tyler Bielby said. “He told me his American family was coming over from Michigan to the game and I just had a gut feeling he was going to have a good one. Not only did he have a good one, he found a way to end the game.”

Owen Simpson set up O’Flanagan on the winner.

“It was a great play by Simpson. They worked hard and we came out and got it done,” Bielby said.

Bielby said there was a playoff atmosphere at the Chatham Memorial Arena.

“Junior hockey is alive and well in Chatham,” Bielby said. “It was by far, outside of our arena, the best environment we’ve played in all year. They’re passionate fans and it was definitely the most hostile environment.”

Chatham, which captured the Western Conference championship, took a 1-0 lead 12 minutes into the game when Craig Spence scored.

The Falcons got on the board at the 11:24 mark of the second when Jagger North scored, only to have the Maroons respond with a goal from Lucas Fancy just over a minute later to take a 2-1 lead. Nicholas Rubino tied it at 2-2 with his sixth of the playoffs later in the period.

There was no scoring in the third period.

“It was fast and intense and it took a team almost a full 70 minutes to get a win,” Bielby said.

Bielby felt is was crucial to start off the round-robin with a win.

“We told the guys on the way up we want to be in control of our own destiny and don’t want be watching a game at the end of the round-robin hoping someone else gets us in,” he said. “It’s like a minor hockey tournament, in a sense. We were glad we were able to get the W but on to Friday we go.”

The Falcons held a wide edge in shots on goal, 51-32 and each team scored a goal on the power play.

Next game in the round-robin is Wednesday when the Maroons visit the Cambridge Redhawks. The Falcons welcome the Maroons Friday at Jack Gatecliff Arena.

The top two teams from the round-robin meet in a best-of-three final for the Sutherland Cup.