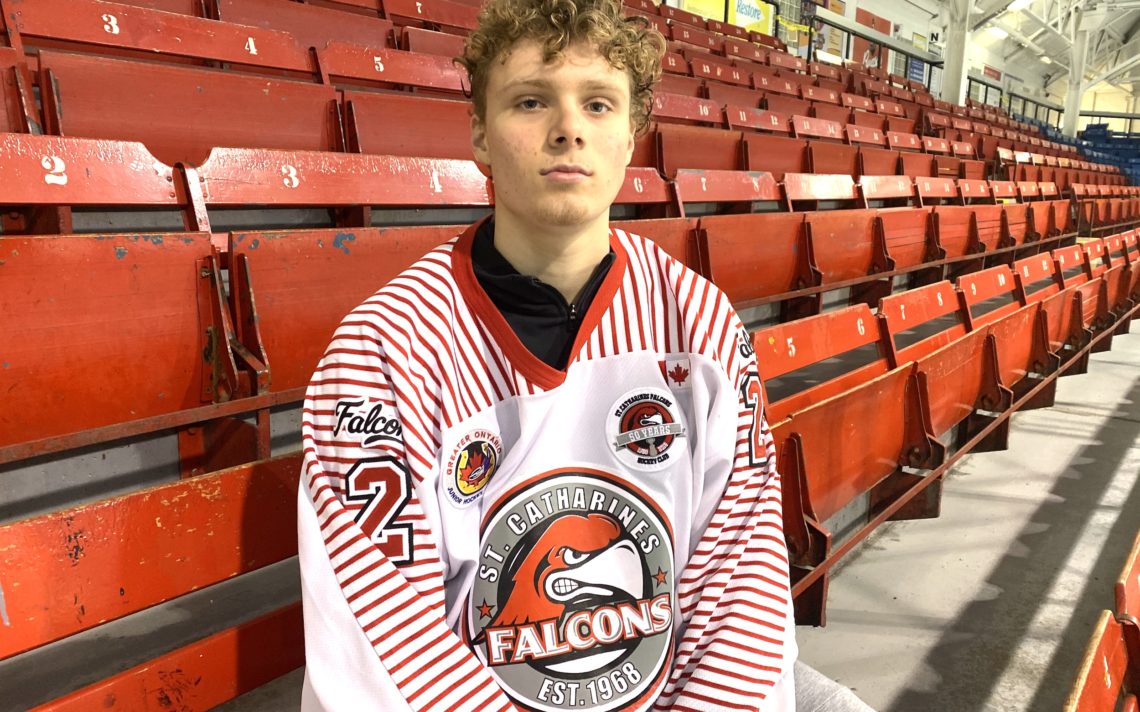 Matteo Giampa may not be a member of the St. Catharines Falcons if head coach Tyler Bielby wasn’t a golfer.

Bielby hit the links in the summer with former Niagara IceDogs winger Matt Gillard, now working as a skills coach, and casually asked Gillard to single out a top player or two he was training.

“I asked Matt of all the young kids and talent he works with in the region who stands out to him and without hesitation it was Matteo,” Bielby said. “He talked about his willingness to work towards getting better, his passion for the game, and the natural skill set he had.”

Bielby then approached Giampa about the possibility of joining the Falcons.

“We tried to get him out for a skate on the off chance if he needed a place to play, that we would be a good fit,” Bielby said.

It didn’t take long for Giampa to impress Bielby on the ice.

“There is just a real high-end skill set. It’s advanced and it stands out,” Bielby said.

“He said to me, ‘No one in the province is going to work harder than me this year.’ Those are pretty big words for a 17-year-old. He is creating some accountability with comments like that. I have full confidence that is exactly what he is going to do.”

Giampa, a 17-year-old Virgil resident, recently committed to the Falcons for the 2020/21 season.

“Obviously, it’s a great organization, great coaching,” Giampa said. “I just wanted to go to a place where I was going to develop my game the most. I thought the Falcons would do a good job of developing my game all around, especially in my defensive game to make me an all around player.”

A six-foot, 176-pound forward, Giampa was selected in the seventh round (142nd overall) by the London Knights in the 2019 Ontario Hockey League draft. He spent last season at Gunnery Prep in Connecticut where he netted nine goals and 19 points in 35 points as a 16-year-old rookie.

“It was great,” Giampa said. “Living away from home at 16, for most kids that’s really hard, but I adjusted to it really quick. The second half of the year I got a little better.

“The whole experience was amazing.”

Giampa felt the level of competition was perfect as well.

“I would relate it to junior B here. One of the guys on the team was drafted. It was cool to see him go through that process and what he had to do to get there,” he said. “It was a great experience.”

Giampa felt playing his first year of junior eligibility at Gunnery was the best course of action to keep his options open going forward.

“I could play OHL or NCAA,” he said. “London is the best junior team in the world. I’m all about developing my game as much as I can. They would definitely develop me.”

Should the Greater Ontario Junior Hockey League play games in 2021 — the league had set a tentative start date of Jan. 15 although that will no doubt be adjusted with southern Ontario going to a 28-day lockdown Dec. 26  — Bielby is expecting big things from Giampa.

“The expectations for Matteo with the hockey team are high,” Bielby said. “I know I can say that because he will enjoy that kind of pressure.

“He is expected to be a top-end hockey player.”

Bielby feels the sky is the limit for the former Holy Cross student.

“He’s ready for the next step,” Bielby said. “He will make the next step, where that is is to be determined. It’s our job to help him get there and we’ll support that when he is ready to make that next move.”

Giampa is enjoying working out with the Falcons for the time being.

“I love the boys. Honestly, when you are on the ice it doesn’t seem there are three years older than you,” he said. “I just feel we are all the same age and we’re all getting along really good.”