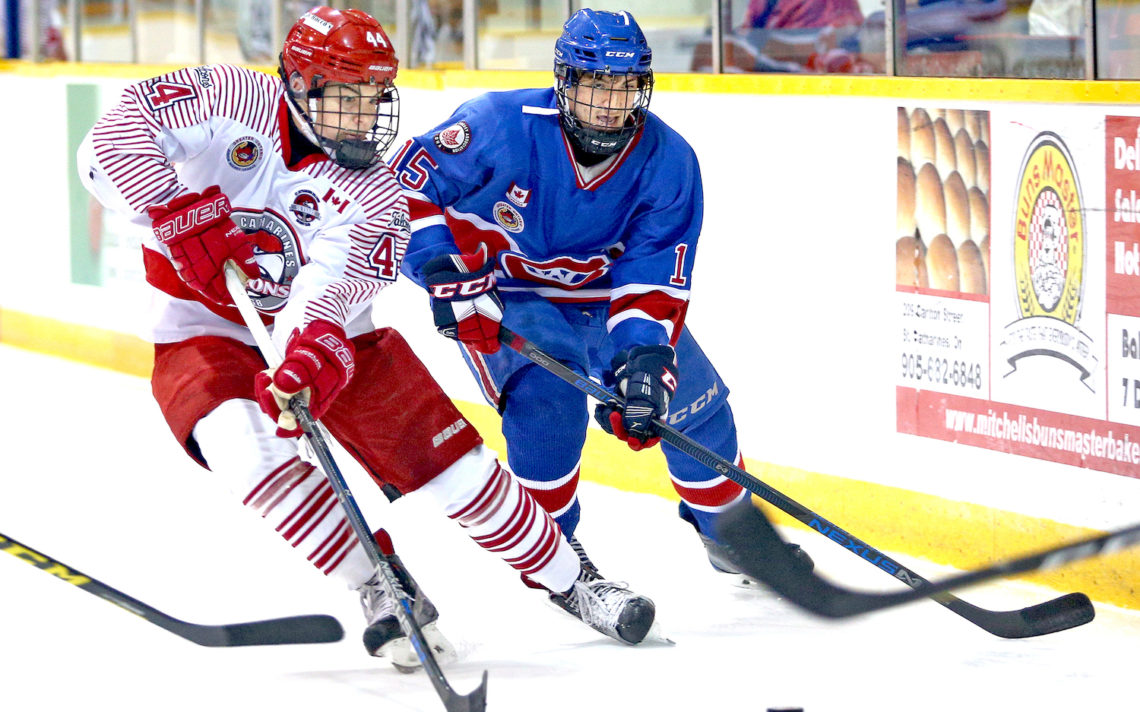 By Bill Potrecz
The St. Catharines Falcons doubled the Welland Junior Canadians 4-2 Friday night at Jack Gatecliff Arena. PHOTO SPECIAL TO BSPN SPORTS
Matt Busby is easy to pick out on the ice.
The 20-year-old rearguard isn’t the biggest or most physical player, but Busby earns his keep as a mobile, smooth-skating defenceman who can run the power play and chip in on offence as well.
Busby netted his second of the season as the St. Catharines Falcons doubled the Welland Junior Canadians 4-2 in a Greater Ontario Junior Hockey League, Golden Horseshoe Conference game Friday at Jack Gatecliff Arena.
The victory was the third straight for the Falcons who improved to 4-1.
The Junior Canadians dropped to 3-2-1.
“For sure I like to be an offensive D man,” the 20-year-old Barrie native said. “You definitely need to play both ends of the ice but I’ve taken on more of an offensive role here as one of the older guys.”
Busby played last season for the Cobourg Cougars of the Ontario Junior Hockey League and hooked up with the Falcons when he enrolled at Brock University.
“I think they had high expectations (for offence) but the D zone always comes first,” he said. “I like to contribute on offence when I can.”
Busby is getting used to a new school as well as a new team and new league.
“It’s been a change for sure but the team has made it pretty easy,” said Busby, who is studying business communications. “It hasn’t been too bad.”
Falcons coach Dan Fitzgerald couldn’t be happier with his veteran defenceman.
“If I could adopt a kid off this team it would be Matt Busby,” Fitzgerald said. “He’s an all-world person and a phenomenal hockey player. His details are top notch.
“He fought it a little bit tonight but he’s a guy we relay on not only to chip in offensively, but to be a stalwart back there. He’s a good player and leads by example. Even when he’s not at his best he helps us.”
Fitzgerald can see things only getting better for Busby as he gets used to his teammates.
“We like to play with speed and want to be very good in transition and he’s a guy who that comes naturally to him. He springs forwards for us. We have a lot of guys who have speed and when a guy like Busby has the puck, they know they can be sprung.”
Welland dominated the first period, outshooting St. Catharines by a whopping 19-8 margin but trailed 1-0. Owen Savory was again dominant between the pipes while Noah Perlic capitalized on a bad bounce to score the lone goal of the period.
Welland finally got on the board eight minutes into the second when Matt Hobbs jumped on a turnover at the blue line and scored a short-handed, breakaway goal for the only goal of the period.
The Falcons took a 2-1 lead early in the third when Matt Baumann poked home a rebound on a power-play before the Junior Canadians tied it a few minutes later when Daelyn Minovski jumped on the puck following a weird bounce in front of Savory.
The Falcons then netted the only two goals of the third to escape with the win, thanks in large part to another standout performance by their goaltender.
“We want to start taking care of him (Savory),” Fitzgerald said. “He does a lot of us and we need to do a better job of helping him out. He bailed us out in the first and second and I thought we got it going in the third a little but it’s certainly far, far from where we want to be in terms of execution and effort.”
Falcon facts: Dante Copps and Jack Venneri did not dress for the Falcons . . . Maliek Powell was scratched for the Junior Canadians.
AVS 2 CANUCKS 1
The visiting Ancaster Avalanche sent the Niagara Falls Canucks to their fourth straight loss Friday at the Gale Centre.
Liam Van Loon and Benjamin Woodhouse scored in the first two periods for the Avs.
Matthew Thorpe got the Canucks on the board late in the third.
Ryan Dugas made 35 saves in goal for the Avalanche.
STATS PACK
BPSN Star of the Game: St. Catharines goaltender Owen Savory with 35 saves.
For the St. Catharines Falcons: Matt Baumann (2); Evan Miller (2); Matt Busby (2); Noah Perlic (1).
For the Welland Junior Canadians: Daelyn Minovksi (3); Matt Hobbs (1).
Game stats: Shots on goal: By St. Catharines on Simon Wood (33), by Welland on Savory (37); Power plays: St.Catharines 0-for-5, Welland 2-for-8; Penalty minutes: St. Catharines 10, Welland 16.
Attendance: 410.
Up next: The Falcons visit Fort Erie Saturday at 7:15 p.m., Caledonia Tuesday at 7:30 p.m. and Thorold Thursday at 7:07 p.m.