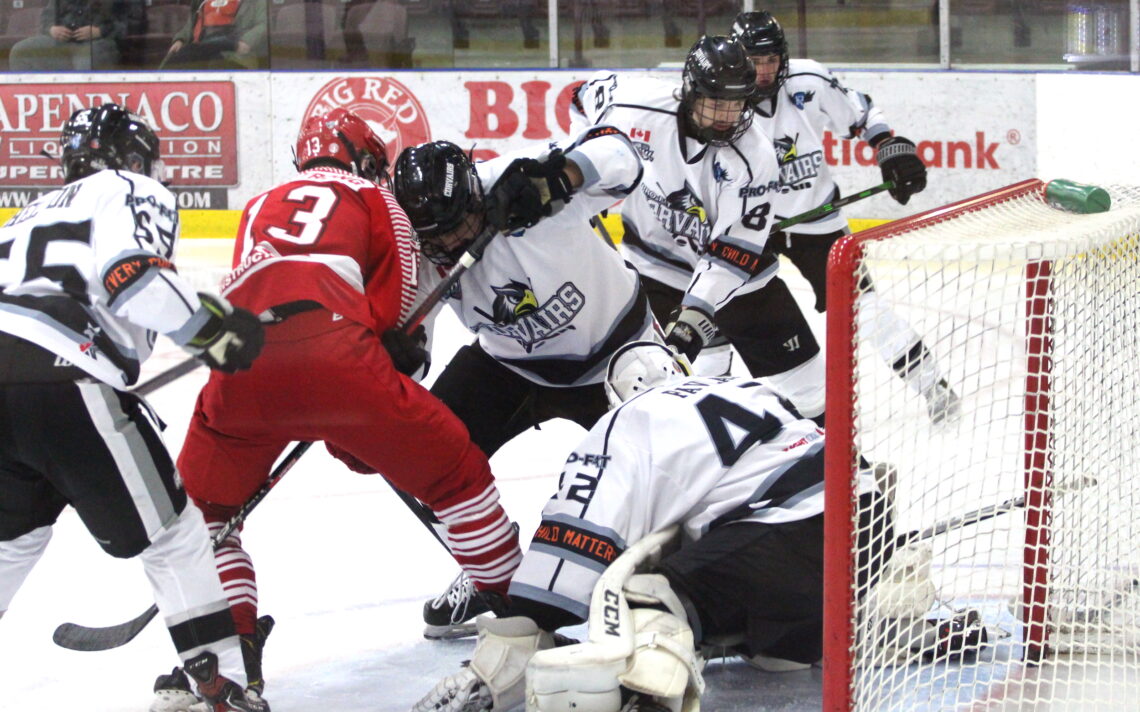 Falcons grind out win over Corvairs

Carter Geoffroy walks a fine line each time he steps on the ice.

The 20-year-old defenceman for the St. Catharines Falcons plays with an edge that makes him a tough opponent, but he also needs to make sure he doesn’t cross the line and spend too much time in the penalty box.

“Carter has come a long way since the last time I’ve seen him as a hockey player,” Falcons coach Tyler Bielby said Friday night following a 4-2 victory over the visiting Caledonia Corvairs at the Seymour-Hanna Sports Complex. “He always has some sandpaper to him and plays with an edge, but we need him on the ice.

“We’re happy to have him and he’s happy to be here. He’s going to help us do some damage.”

Geoffroy played 38 games for the Falcons in 2019/20, garnering seven points and 118 minutes in penalties.

“At the end of the day, I want him in the lineup and I want him soaking up minutes for us,” Bielby added. “He’s going to have to continue to play hard, but play on the right side of the line.

“There’s times and places and you have to be disciplined against certain teams.”

Geoffroy played the last two seasons in the Norther Ontario Junior Hockey League, primarily with the Greater Sudbury Cubs, and was brought back at the trade deadline earlier this month.

“I just wanted to come back and have fun in my last year,” he said. “Sudbury was a fun team but it’s just as much fun playing at home.

“It was time to come home.”

Geoffroy already has 10 minutes in penalties in two games since re-joining the Falcons and is well aware he needs to be responsible.

“It’s gets tough sometimes,” he said. “It kind of depends on the refs in that game but I’ve gotten better. The last time I was here I was very chippy but I think I’m doing well now.”

He is enjoying wearing the red and white once more.

The win improves the Falcons record to 30-4-2 and moves them into sole possession of first place, two points up on the Hamilton Kilty B’s in the Greater Ontario Junior Hockey League standings.

The Falcons were coming off an emotional 7-6 come-from-behind win at Hamilton Thursday and are also battling a bug going around the room.

Bielby was impressed with his club’s character.

“It’s a process,” he said. “We can get sick and in the playoffs you have back-to-back nights so we have to get used to the process now and learn how to dig deep and play a little smarter, rather than harder at times. I thought we did a real good job in the third period of doing that to help close the game out.”

The Falcons took a 2-0 lead in the first period on a pair of power-play goals by Parker Forlin and Blake Yetman just 18 seconds apart.

The Corvairs fought back to tie the game with a pair of goals before the halfway point of the second before Cam Knight netted his 11th of the season with under a minute to play in the period.

Jonah Boria then iced the game away with an insurance marker in the third.

“Parker Forlin is the reason we scored that fourth goal to close this game out,” Bielby said. “For a 16-year-old to go against a bunch of grown men, he played hard and battled and took his beatings and helped us win tonight.”

In other games Friday, the Thorold Blackhawks defeated the Niagara Falls Canucks 6-2 while the Fort Erie Meteors doubled the Pelham Panthers 4-2.

On deck: The Falcons are at Welland Sunday and home to the Fort Erie Meteors Tuesday.