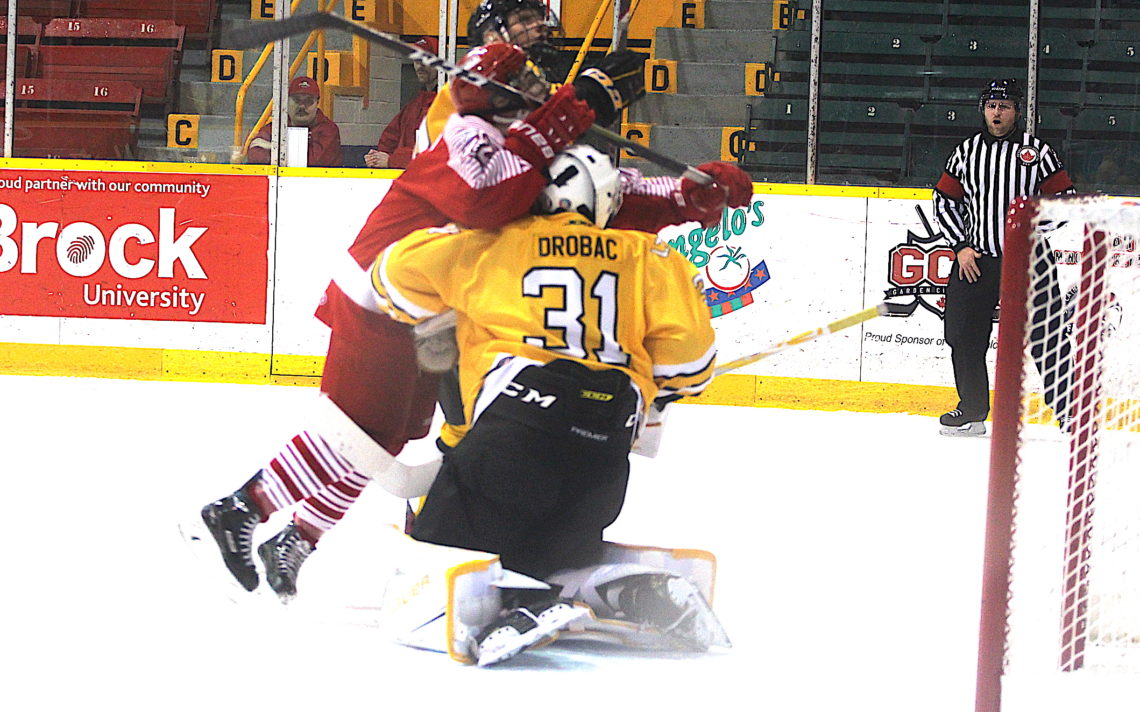 The St. Catharines Falcons’ offence came up empty in their final game before the Christmas break.

The Falcons fired 31 shots at Matteo Drobac but couldn’t find they back of the net as they dropped a 2-0 decision to the Hamilton Kilty B’s in a Greater Ontario Junior Hockey League, Golden Horseshoe Conference game Friday at Jack Gatecliff Arena.

The Falcons (21-9-2) missed an opportunity to move to within one point of Niagara Falls for second place as the Canucks dropped a 4-1 decision at home to the Caledonia Corvairs.

The Kilty B’s improved to 19-11-2-1 and trail the Falcons by only three points for third spot.

Falcons coach Tyler Bielby couldn’t find much fault with the effort, a lack of finish around the net notwithstanding.

Bielby said the Falcons will need to work on simplifying things following the Christmas break.

“All we can do is bring pucks to the net, bring bodies to the net, and make life a little more difficult for the other goalie,” he said. “I thought we could have done a better job of bringing traffic to their tender tonight. We’re doing a lot of right things, but it’s getting to those dirty areas that’s going to allow you to win those one-goal games.”

The Falcons held a 17-5 edge in shots in the first period and the outshot the Kilty B’s again 8-6 in the second.

Hamilton finally broke the scoreless deadlock halfway through the third when Jacob Macdonald beat Blair Coffin for his team-leading 21st of the season.

“If you look at the difference tonight, their game-winning goal wasn’t a hard shot. It was a float-in but their was guy directly in front of our goalie and he did not see it,” Bielby said.

Falcons forward Xavier Drummond admitted it was a frustrating way to head into the Christmas break.

“Some nights you’re just not going to find the bounces and tonight was one of those nights,” he said. “The message is to keep going and eventually one is going to fall in, but you have to give credit (to Drobac), he played phenomenal.”

Noah Caperchione and Nick Giunta added singles for the winners.

Justin Kyle netted the lone goal for the Canucks.

Up next: The Falcons are off until Thursday, Jan. 2 when they visit the Thorold Blackhawks.