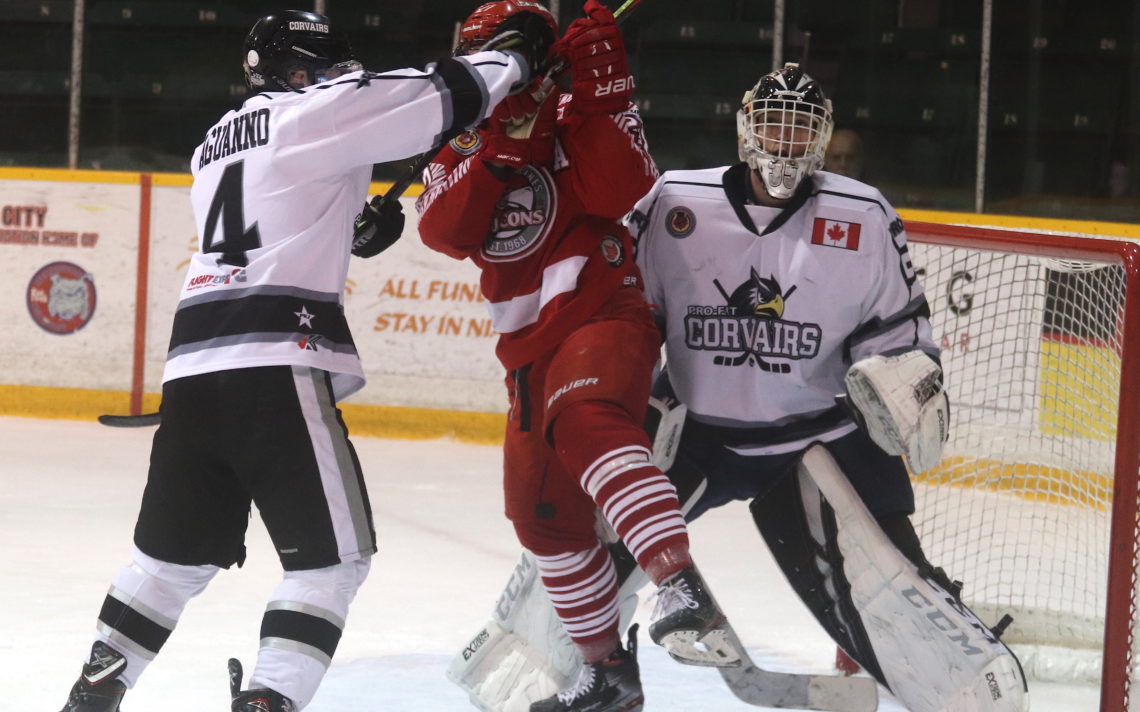 St. Catharines Falcons forward Xavier Drummond was in no mood to celebrate his 20th goal of the season Friday night after his team dropped a 5-2 decision to the Caledonia Corvairs in Greater Ontario Junior Hockey League, Golden Horseshoe Conference action.

“I didn’t even know I got my 20th, but it was nice to get that out of the way,” the 20-year-old Bradford native said. “I am really just focused on trying to play my best going into playoffs and making sure my game is at its peak.”

It is the second straight 20-goal season for the 5-foot-10, 159-pounder, who is now three points away from matching last year’s career high of 50 points. One stat that Drummond has already far surpassed is penalty minutes. After acquiring 72 minutes in penalties last season, he has already more than doubled that with 148 minutes of sin bin time.

“I don’t know why,” he said. “It is probably just a little bit of frustration and I have got to get it out of my game before the playoffs. It’s just frustration. I really don’t want to elaborate too much.”

In his last year of junior hockey, Drummond wants to leave on a high note.

“There is some added value, for sure, to the end of the season and you don’t want your junior career to come to an end with a disappointment,” the Brock University student said.

He is confident the Falcons have what it takes to make a long playoff run.

“Coming off a (two-game) suspension where I know he was really hard on himself for putting the team behind the eight ball a little bit, he showed up tonight, played a real disciplined game and scored a goal scorer’s goal.”

Discipline has been a key word for Bielby in discussing Drummond’s penalty barrage this season.

“He is a passionate kid who wears his heart on his sleeve,” he said. “Him and I have talked about emotional intelligence all year and it is something that we will continue to talk about.”

The talk is straight forward.

“You can play with passion, energy and emotion, but it’s just about channeling it the right way,” Bielby said. “When he does, he helps us. When he doesn’t, it can put us in a position to be hurt.”

Bielby was mostly OK with his team’s performance Friday.

“I didn’t like our first 10 minutes,” he said, referring to a Caledonia goal 29 seconds in the game and a short-handed goal allowed before the first period was half over. “I thought we settled in after that and it comes back to that on five-on-five, we can play with anybody on this province.”

He did sound a little tired of saying that.

“We have to minimize our mistakes because that’s what cost us tonight,” he said. “It was some mental errors.

“We talked about how they like to fly out of their zone on the penalty kill and we had to make sure we understood that and sure enough, on the second goal, we let a guy in behind us for a short-handed goal.”

Mistakes like that can drive a coaching staff crazy.

“It was a couple errors tonight that cost us the game.”

Drummond didn’t disagree with that assessment.

“We played well and we thought we skated with them tonight,” he said. “We had our chances and it really just came down to a couple of mental errors, whether it was penalties or not picking up the loose guys.”

Up next: The Falcons play the Fort Erie Meteors Saturday at the Leisureplex at 7:15 p.m.