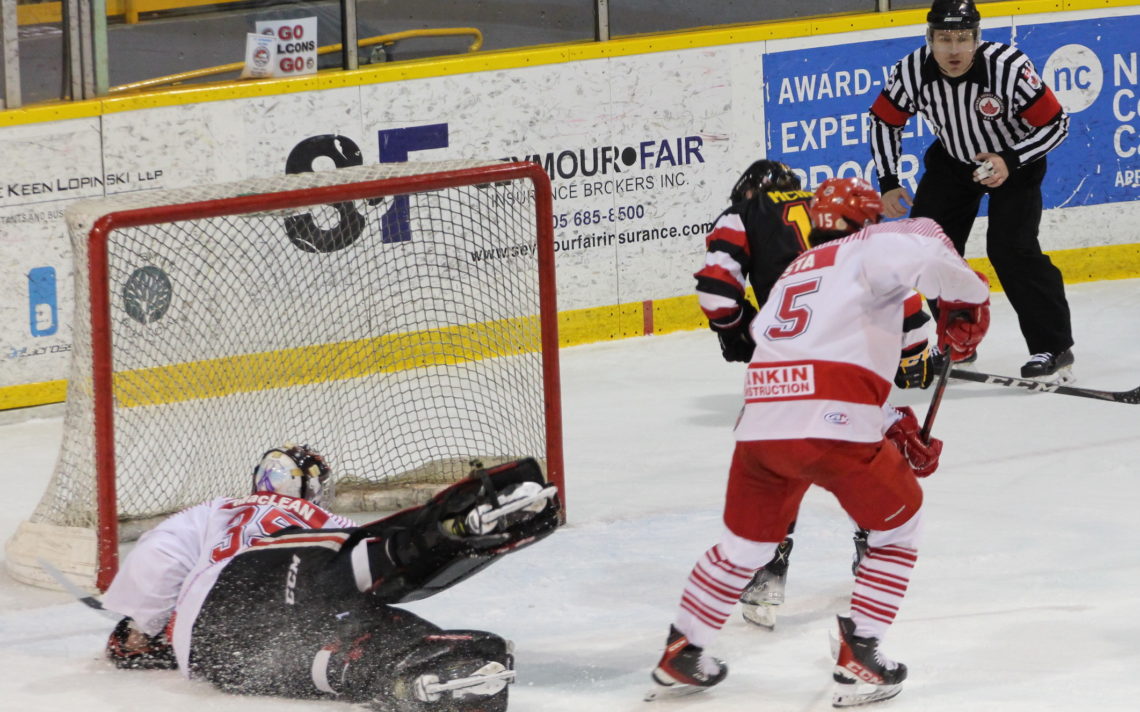 The spotlight continues to shine on Mitchell Armstrong.

The 18-year-old forward was front and centre in Game 1 of the Greater Ontario Junior Hockey League, Golden Horseshoe Conference best-of-seven championship final when he scored three times to lead the St. Catharines Falcons to victory.

Tuesday night at Jack Gatecliff Arena, Armstrong was once again the hero as he scored the winner 3:40 into the second overtime to give the Falcons a dramatic 3-2 victory over the Hamilton Kilty B’s and a 3-1 lead in the series.

The Falcons can earn their first Golden Horseshoe championship since the 2012/13 season with a win Wednesday in Hamilton. Game 6, if necessary, would be in St. Catharines Friday.

“It was an amazing feeling, I can’t describe it,” Armstrong said. “Just like the hat trick night, you don’t really know how to act in the moment.

“It probably won’t set in until tomorrow, and even then it may not. Just focus on the next game and go from there.”

Armstrong tried to soak in as the moment as much as possible.

“You can always reflect at the end of the day. I’m a big reflecting guy. Even when I come off from a shift, I try to think back to what I could have done better,” he said. 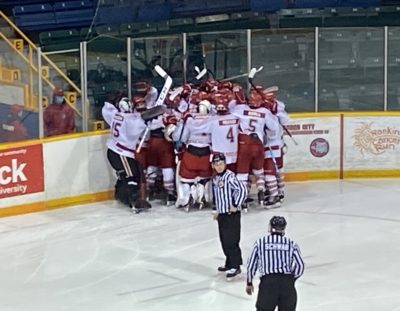 Armstrong scored the winner when he pounced on a turnover inside the Hamilton blueline and beat Kilty B’s netminder Braedyn McIntosh with a shot that that trickled into the corner of the net.

“I think it was a little bit of a turnover but I think I blacked out,” Armstrong smiled. “I ended up getting the puck on my stick and I guess buried my chance.”

Armstrong is a favourite of Falcons coach Tyler Bielby for his work ethic and selflessness.

“We have the best captain the in the league (Joe Colasurdo) but if we didn’t have him, they there’s no question Mitch could be wearing that letter in our dressing room,” Bielby said. “He’s one of a kind. He loves every single person in that dressing room and he shows that every day, so it was nice to see him get rewarded.”

Armstrong, who is a member of the St. Catharines Athletics junior A lacrosse team, has had to put boxla on the back burner for the time being. The A’s open their season Wednesday and have given Armstrong their blessing to finish his hockey season.

“I’m beyond grateful,” Armstrong said. “Words can’t even describe how they have accepted me to be part of their team. I can’t wait to get started but my focus is this right now. I’m happy Chickie (general manager Jeff Chcoski) understands that and fully supports me.”

Following a scoreless first period, the teams exchanged power-play goals in both the second and third periods setting the stage for overtime.

“It’s tough (to watch), but it’s more difficult to have the skates on,” Bielby said. “As much as you want to be the hero, you don’t want to be the guy who makes a mistake but you have to keep at it.

“We kept reminding the boys to embrace the moment and enjoy it. We kept it positive and we’re rewarded.”

The Falcons, coming off a superb effort in Game 3, found a way to get it done.

“It wasn’t quite as complete as Game 3, but there were moments where we imposed our will and that wore them down and maybe that was the result of the mistake at the end of the game,” Bielby said.

The Falcons aren’t taking anything for granted heading into Hamilton Wednesday.

“We enjoyed the moment for about 30 seconds and then told them to get some food and get hydrated and be ready to go tomorrow because that will be the toughest game to win,” Bielby added.

Up next: Game 5 Wednesday in Hamilton.