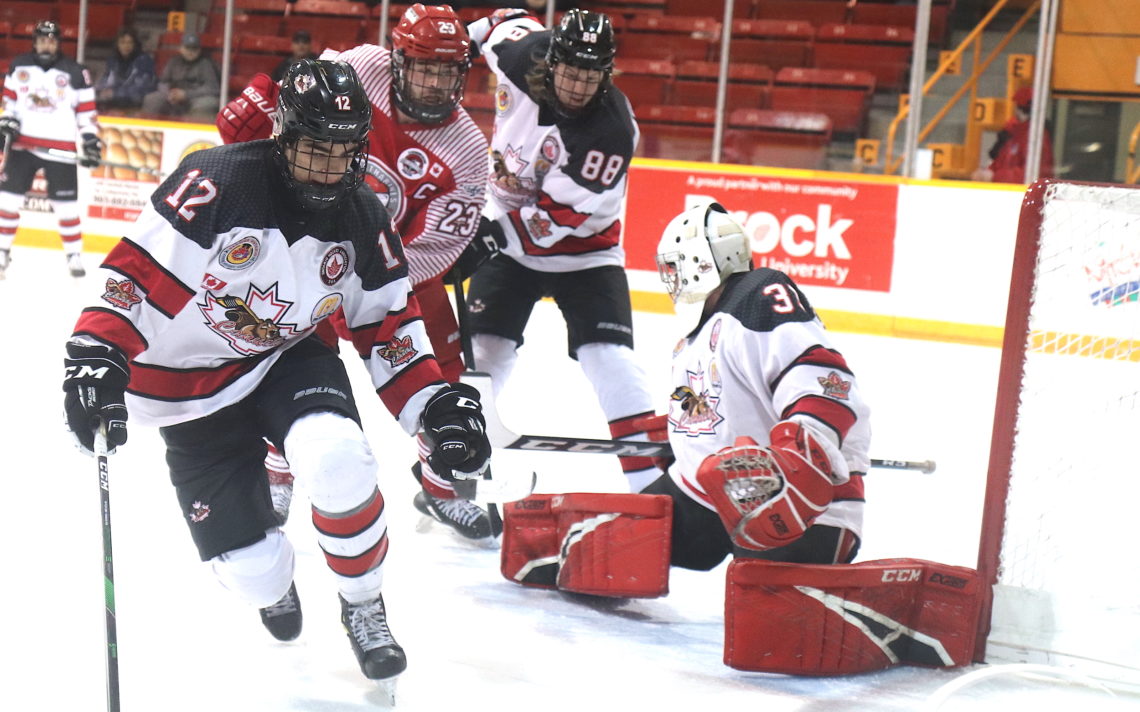 The St. Catharines Falcons and Niagara Falls Canucks squared off in a pair of non-contact scrimmages Friday and Sunday and Falcons coach Tyler Bielby came away impressed.

“They missed the memo on it not being a regular season game and that we’re in the middle of a pandemic,” Bielby said. “These guys want to play hockey. They’re preparing the same way before a game and you can see it at the competitive level as well.

“The contact isn’t there but the compete level is. The chirping is there, the will to succeed is there. There were lots of celebrations on the goals. Both teams are trying to find some piece of normalcy and I think we could see that.”

Teams have been practising for about six weeks and recently were given the go-ahead to play non-contact scrimmages. No fans are permitted and only 50 total participants are allowed in the arena.

“I was very curious to see how that would translate into a game setting and the nicest thing to see is these young guys are a special talent,” Bielby said.

The Falcons dressed 10 forwards, six defencemen and two goaltenders for both games, Friday at the Gale Centre in Niagara Falls and Sunday at Jack Gatecliff Arena in St. Catharines.

Friday’s game ended in a 3-3 tie while the Falcons prevailed 5-4 Sunday.

The Pelham Panthers and Fort Erie Meteors also played Sunday in Pelham and skated to a 3-3 tie.

Bielby wasn’t quite sure what to expect heading into the games.

“I think as a coach going into the game Friday with the no contact piece that we were trying to coach accordingly but until we got to witness exactly what it looks like we didn’t really have an idea until you can actually see it,” he said. “The biggest surprise was how quickly the game turned. It was very fast and very difficult on the defenceman, in particular.”

Bielby said the games are useful as a tool to evaluate the players, even without contact.

“Yes, absolutely. From the defensive side of the puck, how our defenceman move up the ice and close gaps and being able to play these one-on-ones without contact, there is some evaluating. It really pushed their foot speed and their agility and you get to see it in a setting like this.”

Bielby was particularly impressed with three of his young forwards — Cameron Lowe, Tai York and Michael Stranges. Lowe is a draft pick of the Erie Otters while York was selected by the Barrie Colts. Stranges scored a pair of goals in Sunday’s win.

“Lowe, York and Stranges made it a point to stand out over these first two games,” Bielby said. “York and Lowe are drafted for a reason. They are smart hockey players who like to bring it and Stranges has been a real nice surprise for us.”

The teams plan to play again Friday in Niagara Falls and Sunday in St. Catharines.

Bielby said if the season has to start under the current restrictions, he would endorse it.

“I think from on what I saw with the energy level of these young men it’s worth it for the hockey community to do what’s right by them and try and do anything possible to keep them on the ice throughout the season, pending we can keep everybody safe and healthy.