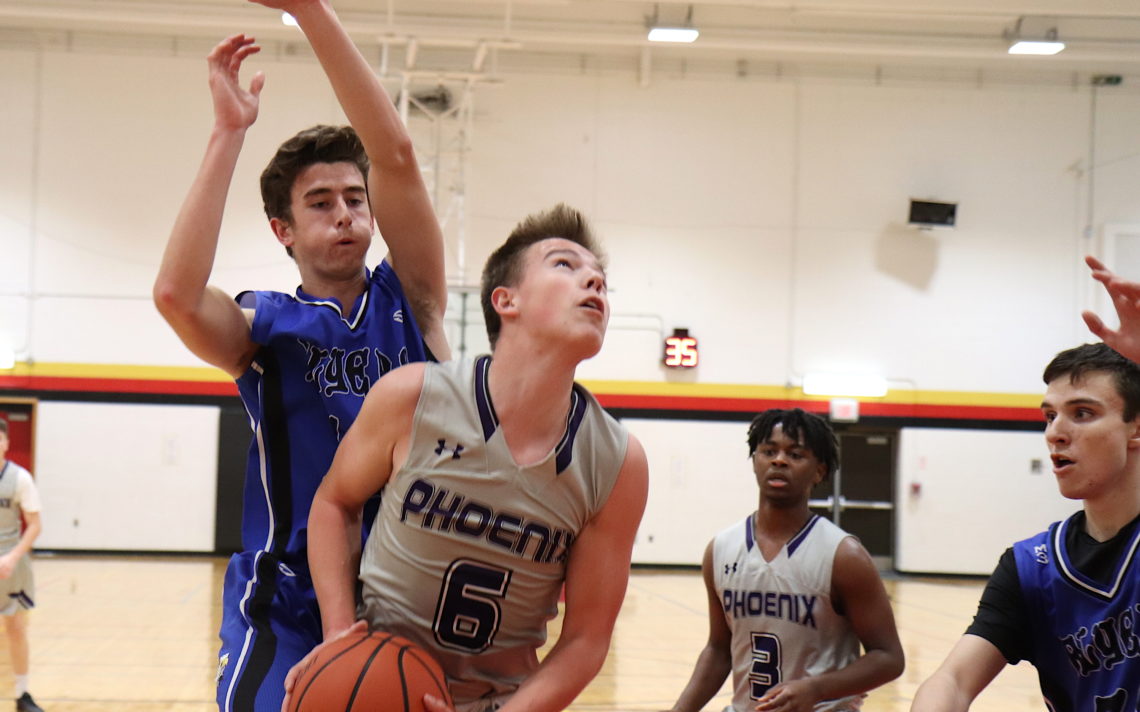 Duemo and Phoenix cruise into finals

“Because he plays with such intensity in everything he does, you know when he goes out for football he is not going to hold back and he is going to go all out,” he said. “And because he is the athlete he is, he is somewhat featured. He runs the risk of getting hurt but we don’t want to stand in the way of a kid.”

Duemo, who scored nine points Thursday night as the Phoenix advanced to the Standard finals with a 78-44 victory over the Eden Flyers, got more than a little banged up during the football season.

“I separated my shoulder twice and I had a problem with my right knee which forced me to wear a knee brace for a little bit,” the 17-year-old said.

“He was a little upset with the injuries because we were practising during that time but he understood and he was OK with it.”

It was something the Grade 12 student was focused on doing.

“I wanted to play football my whole life but my mom didn’t let me. But the last two years she said OK and I loved it a lot,” he said.

The 6-foot-1 guard has used his football experiences to help him on the hardwood.

“It’s keeping calm and focusing on my job and doing what I have to do on the court.”

Duemo does plenty on the court.

“He is an incredibly hard worker and a really good  athlete,” Marcheterre said. “There isn’t much physically that he can’t do on the floor. He can jump out of the gym, he can shoot, he can drive and he can really defend well.”

Duemo has yet to decide whether he will return for his 12B year. It seems like yesterday he was in Grade 10 but he is already playing in his third Standard tournament.

“Time flew by and I wasn’t expecting it to go by so fast but I want to make the most of my last year.”

He has a number of things he wants to work on.

“I want to be a good leader on my team, set a good example for the other kids and just play as good as I can this year.”

The Niagara Tigers travel player would love for his team to make history and be the first school to record a Standard four-peat.

“It is always in the back of my mind obviously, but I am really focused on what I need to do and what’s in front of us. We have to get past each challenge and hopefully come up with a big win tomorrow.”

Duemo was somewhat OK with his team’s game versus Eden.

“I think we played pretty good, but I think our defence could be better,” he said. “We are a little rusty right now but I think we can fix things in time for tomorrow.”

“We started off with the tone and the pace that we wanted to play at and that helped us out to jump ahead,” he said “We got ahead and then we got away from some of the things that we wanted to do but it’s about getting to the next game and we have to be satisfied with that.”

They were full value for their win Thursday night.

“It was a fantastic job on their part,” Eden coach Jonathon Thorpe said. “They played excellent, pushed the ball up the court, they got a lot of open layups at the beginning of the game and they are really physical and athletic.

“Our guys definitely got tired out by the end.”

Despite the loss, Thorpe was more than happy with how his team played in The Standard tournament.

“It has been three great games for us,” he said. “We played three good teams and we had a lot of fun.”

After winning the consolation title last year, the Flyers made it to the championship semifinals in 2019.

“It was a great achievement for these guys and we did everything that we were supposed to do,” Thorpe said. “The tournament committee ranked us fourth and we got to the semifinals and lost the team that is seeded to win the tournament.”

He feels his team can only benefit from playing a team like the Phoenix.

“I think the guys can see that there is another level that we are not at yet, but we’ll say it’s not yet and we will work towards getting there.”