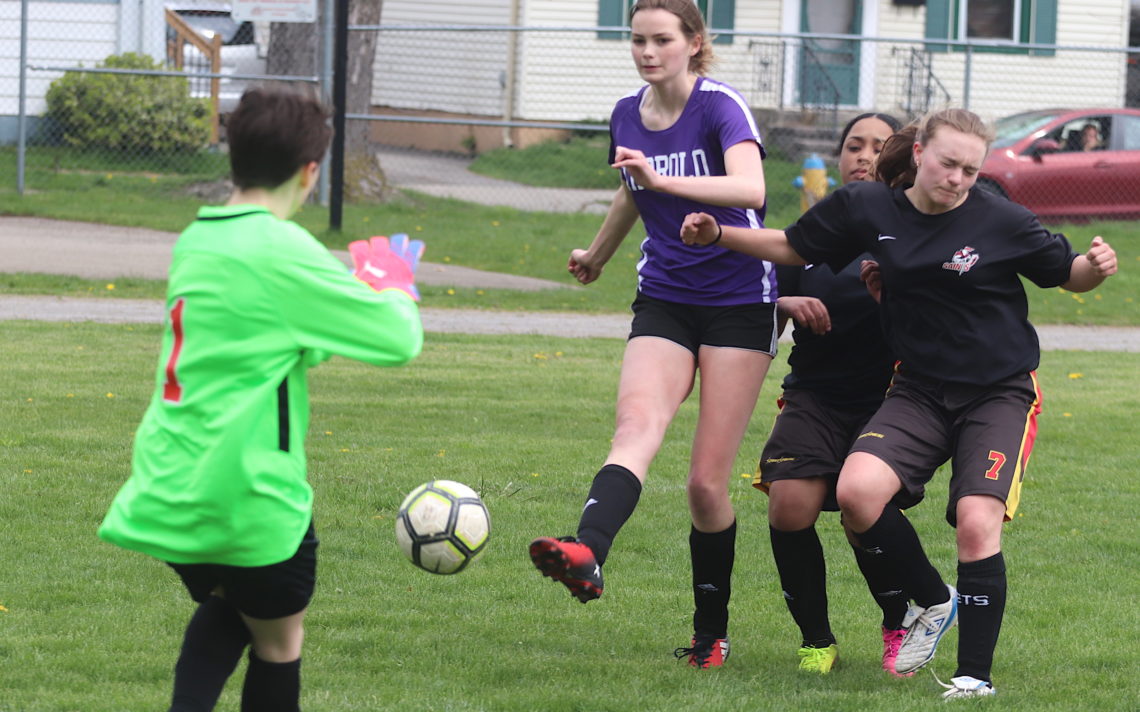 After a two-year absence because of the COVID-19 pandemic, Grace Drummond is thrilled to be back playing high school soccer for the Thorold Golden Eagles.

“It is really important for me, especially because I haven’t been able to play since Grade 9,” the St. Catharines Jets travel player said Monday, after scoring two goals to help Thorold defeat the St. Catharines Collegiate Saints 8-0 in Niagara Region High School Athletic Association action. “Being able to come together with all my friends again, and being together as a school and not just a club outside of school is nice to see, especially since it is my last year.”

“Grace played for us when she was in Grade 9, which was the last time we had a team, and she was probably one of our strongest players as a Grade 9,” he said. “I am sure she hasn’t played as much as she would have wanted to the last two years but she is clearly a strong player. She could fit it in on any Tier 1 soccer team in the Niagara region.”

Fenwick likes Drummond for more than just her skill level.

“She is good leader and we are happy to have her. She is very positive with the girls who are not at the same level as she is and she is very upbeat. She is out there having a good time playing soccer.”

The 17-year-old is more than happy to be both a teammate and a teacher of soccer.

“There are only a few girls who do play outside of school so it’s great to watch them learning things and having fun while doing it,” the Grade 12 student said. “I like being able to teach them things, cheer them and guide them along.”

It is a role she is very comfortable in.

“I enjoy it, I take a lot of pride in it and I always have.”

This fall, Drummond is off to Brock University to study concurrent education. She would love to one day teach and coach at the high school level.

“I feel like I have a lot of leadership skills that I have built throughout the years of being an athlete and just a person in general,” she said. “I am a good communicator and I am able to word things in a way that people can learn from it.”

Drummond also played basketball and volleyball for Thorold and is planning to play slo-pitch for the first time this year.

“It will be difficult to stop playing but I feel like all the skills I developed won’t disappear. I will always have them somewhere in me,” she said.

Fenwick described his team as being in a bit of a rebuilding mode.

“We have a number of seniors who have played a bit of soccer before and a number of Grade 12s who are out there learning the game. It is a senior team but there’s not a lot of soccer experience. We are in the right place in the Tier 2 Division.

“We are just happy to be back and we are going to try and keep a good team attitude, be positive out there and hopefully have fun.”

“We are just here to have some fun and learn the sport. We have a bunch of first-time players as well,” she said. “After COVID, it is just nice to have them all together and back on the field.”

Progress won’t be measured by wins and losses.

“It is to introduce the sport and do some team building,” Stadnyk said.

For the St. Catharines Collegiate Saints: No scoring.