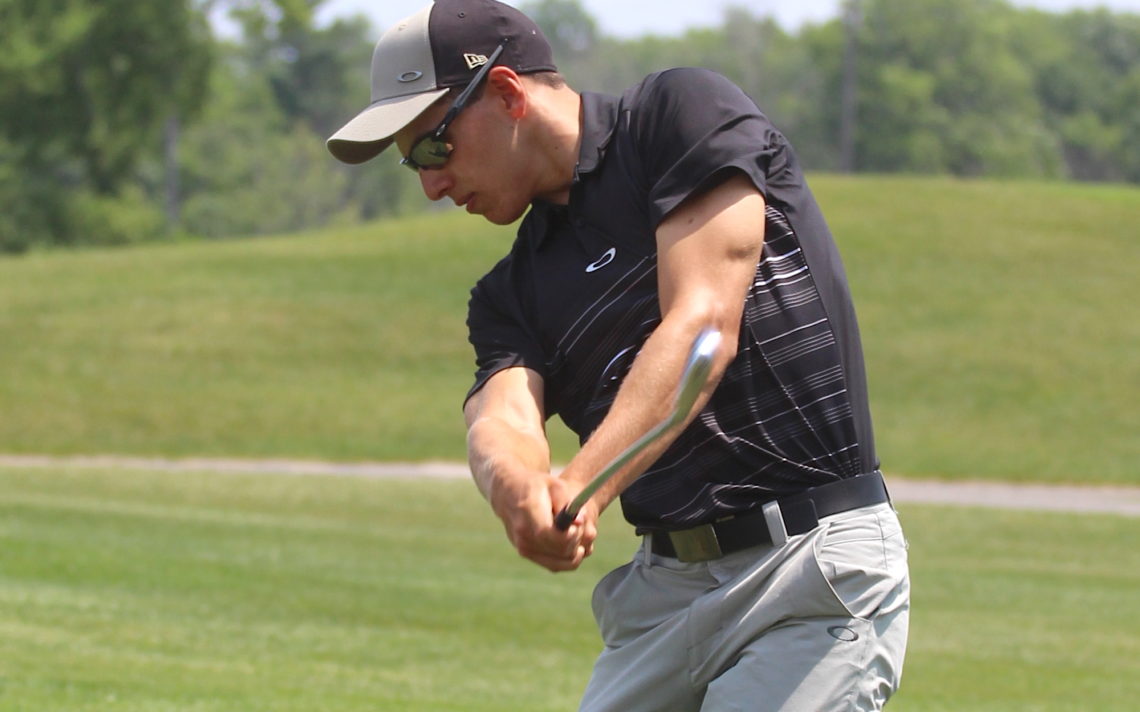 Sitting at five under par on the final hole and looking at a 119-yard approach shot to his final green, the 17-year-old Niagara Falls native started thinking about shooting a six under par 66.

“I think it was a little bit of nerves,” he said. “I had the wind in my face and it was 119 yards to the pin in front of the green. I was trying to hit in on the green and I chunked it into the water and I took a double (bogey).”

The two handicapper at Grand Niagara still finished with a 69 on his home course which was good enough to record a two-shot victory and his second consecutive victory on the Niagara tour.

“I will learn from being in that position,” he said. “Being there, I think my mind has to be more on where I want the shot to go and I think I was wavering a little about the number (66) and thinking about it.”

To record his winning score, the Grade 12 student at Saint Michael hit excellent iron shots into the par fives and putted well.

“I was rolling it up there and I would usually have a tap-in par.” he said. “I had the odd birdie and that’s what got me into the 60s.”

He was excited about going back-to-back.

“I’ve struggled a little bit the last few weeks, but it’s a long process and now it’s coming around and I am seeing my game go where I want it to go.”

Included in his recent struggles was missing the cut at the Golf Ontario junior boys championship by one stroke, after firing rounds of 76 and 79 at the Loyalist Country Club.

“I was playing pretty solid, but I just didn’t score,” he said. “It wasn’t too bad.”

His goals for the summer are to win the overall points title on the Niagara tour and play well in a couple of outside events.

“Moving forward, I would like to get a scholarship at Arizona and hopefully make the PGA one days,” he said. “Oh yeah. Those are big goals.”

With a golf scholarship signed, sealed and delivered at Niagara University in Lewiston, N.Y., one might think the pressure is off Susan Leone.

Not so at all.

“This year, there are seven girls on the team, but only five get to play,” she said in an earlier BPSN article. “I send in all my scores from my tournaments this year and that will kind of determine if I play or not.

“I have to keep pushing myself.”

With regards to that goal, she carded a 76 Monday at Grand Niagara to record a two-shot victory in a NDJGA tour event.

“It was the first step in the direction that I want to go,” she said.

She has had a few missteps this summer. At the recent Ontario ladies amateur golf championship played at the Seguin Valley Golf Club, the 18-year-old Niagara Falls resident tied for 45th after rounds of 88, 104, 93 and 94.

“It wasn’t good,” she said, with a laugh. “It was a crazy course, I didn’t have caddy and my bag broke, it was 40 degrees out and my driver was terrible; left, right, OB (out of bounds and water.

Things went much better for her Monday.

“I kept it in play, I hit the ball straight and my irons were pretty good,” the recent graduate of Saint Paul said. “I have been chipping a lot in my backyard and that kind of helped out with my chipping.”

Her backyard is no ordinary backyard. Her father, Jerry, built a 60-yard hole at the family residence, complete with putting green and sand traps.

“There are three pins in my backyard and I practise to each pin,” she said. “Whenever I am on the course (chipping), I think backyard shot.”

She feels she has turned her game around by paying more attention to practising.

Next stop on the tour is Friday at WilloDell.

Following are the leaderboards for Monday’s NDJGA tour stop at Grand Niagara. Par is 72.