R.J. Derhodge finished things off the way he started on the Niagara District Junior Golf Tour.

The 18-year-old Niagara Falls native fired a 77 to take home top spot in the U17/19 boys division Monday on the 10th and final stop of the 2019 tour at Beechwood.

Derhodge, who won the first two stops on the tour and the final three, also repeated as boys overall points champion.

The St. Michael High School graduate admitted another tour victory was on his mind as he teed off Monday.

“For sure. I thought I was playing pretty good right now and if I just shoot something decent I thought I had a good chance,” he said.

Derhodge managed to work around a pair of sevens and a six after getting off to a strong start.

“I was one under par and five and six I ended up going triple (bogey), triple on those,” he said. “It wasn’t like I was blowing up mentally. I just hit some bad shots out there.

“Those holes are tough. You have to learn to keep it in play.”

Derhodge then double bogeyed the 16th before recovering on the final two holes.

Derhodge said it was key to try and not get all the strokes back after a bad hole.

“You immediately want to make a birdie and you think it’s going to be really hard to get it back if you don’t do something right away,” he said. “I didn’t let it bother me, to be honest.

“I don’t normally do that. It just happened and I moved on from it and played my game and ended up coming in with the win.” 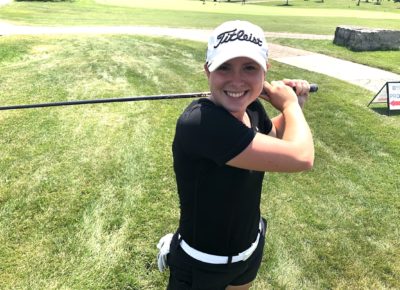 The 16-year-old Stoney Creek resident fired a 75 to take the girls title. It was the Cardinal Newman student’s fourth win and her best round of the season on the tour.

“I drove the ball fantastic. Normally when I drive the ball well I’m going to play well,” she said. “If I put it in the fairways, it’s going to be good so that was awesome. I hit my irons well too and made three birdies on the back nine on par fives which really helped too.”

“I was thinking about possibly winning the tour but a lot had to go my way,” she said. “I thought just go out and play my best and whatever happens, happens.”

“It was great,” she said. “It was in good condition. It was a little wet but we played lift, clean and play so that was good. The greens were rolling good so it was great.”

Bennett was satisfied with her performance on the tour.

“I happy with the wins. I didn’t think I would have that many coming into this season.”

Bennett plans to continue to play tournaments in the United States as well and return to the junior tour next season. 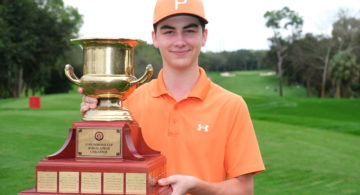 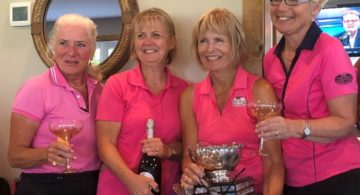