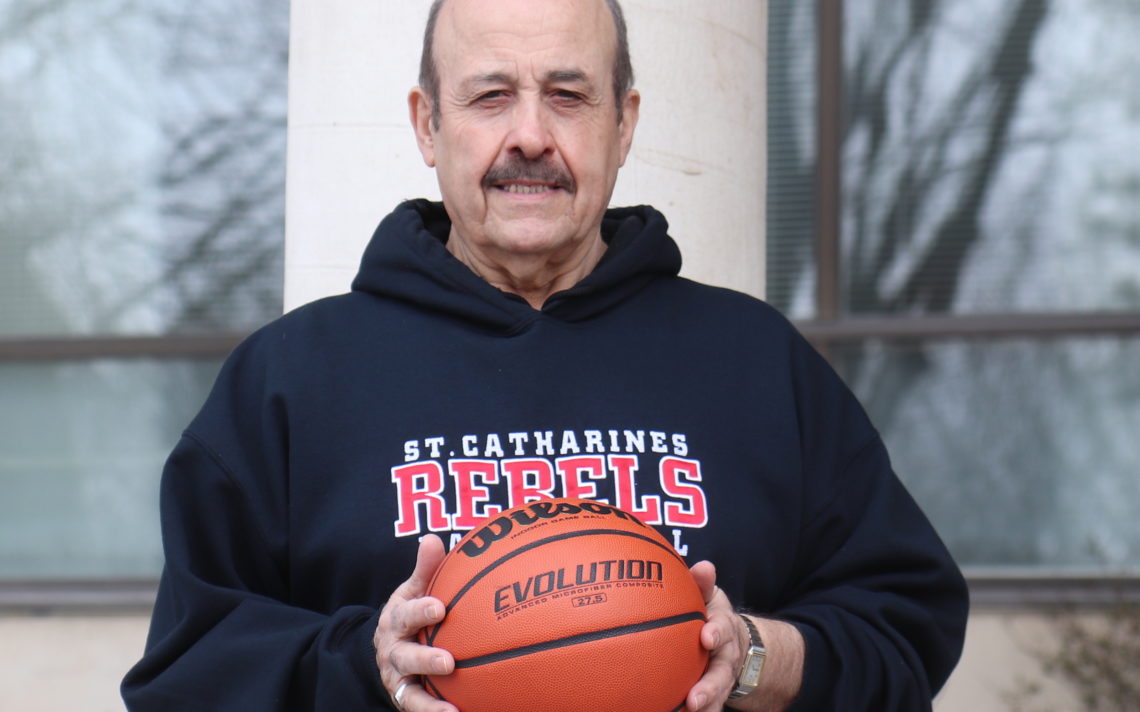 Dante Pirillo has spent half a century coaching and organizing basketball in Niagara.

The St. Catharines resident’s motivation for his lifelong involvement is simple.

“It was my love for the game of basketball,” said the retired District School Board of Niagara elementary school principal. “I guess it goes back in life that when you can’t do something yourself, you try and do it through others. Maybe I am a perfect example of that because I live every minute with my players on the court and on the sidelines.”

He still watches the game incessantly, learns from what he watches and implements it on the court.

“I can’t imagine not doing basketball. I told somebody they would have to wheel me out of the gym in a wheelchair.”

He has a deep affinity for the sport.

“It is the ongoing action that takes place regardless of who is playing. And regardless of the score and the individual talent that is out there, the team concept is the factor that leads to wins and losses. How players can show off their talents while working within the facets of a team game is fascinating to me.”

Pirillo has earned the respect of his peers with St. Catharines CYO basketball.

“Dante Pirillo has been a part of the CYO family as long as anyone can remember,” CYO executive member Gerry McIlhone said. “He has been an amazing advocate for both the girls and boys novice (age and skill level) groups in our programs. He has been a successful coach at the elite select level, convened one of our largest and most important programs for the youngest girls and boys as well as making contributions at the board level. He is an energetic volunteer in the community at large and has been a major force to ensure the high school girls programs get the recognition they rightfully deserve. Dante can always be counted on to lend a willing and capable hand whenever and wherever it is needed.”

Born in Cosenza, Calabria, Pirillo came to Canada when he was four and his family settled in Thorold. After elementary school, he attended Denis Morris.

“I played a little bit of everything and I was not particularly good at anything. A doer of all and a master of none,” said the graduate of the University of Windsor, Brock University and Niagara University

There wasn’t a gym in his elementary school and he became a gym rat when he got to Denis Morris.

“That was my first exposure to basketball. I loved it and I was in the gym as much as I could, intramurals and after school,” he said. “Because I loved the game so much and had a passion for it, I would watch it, study it and I became a student of the game. I would like to think that I still am because I am still learning new techniques and new strategies.”

He started coaching during his second year as an elementary school teacher at Caroline M. Thompson Elementary School in Port Colborne. He coached the boys Grade 6-8 team for 13 years and in the mid-to late-1970s, he and a friend, Bob Dockrill, put together the very first travel basketball team based in Port Colborne. The boys team was made up of mostly of players from Pirillo’s school augmented by some of the better players from the other local schools.

“We went to local tournaments in London, Hamilton and Brantford and did really well right off the bat,” he said.

When his first daughter, Melissa, was born he asked for a transfer. He moved to St. Catharines and taught at Prince of Wales School in Thorold. He coached boys basketball there and many of his players ended up attending Thorold High.

“Four or five years after I was there, I was asked to go over and coach the Thorold senior boys team. The superintendent was great in allowing me to leave work a few minutes early when I had to attend games.”

He coached the Thorold senior team for five years.

“I was very proud of the fact that we were the first team to make it to OFSAA in the over-100-year history of the school and most of the boys on that team were graduates of Prince of Wales. I think my picture is still somewhere there in the building.”

His Thorold High experience was a crazy time for him. In addition to coaching a high school team, he was coaching the Grade 7-8 boys and the junior boys at Prince of Wales and his daughter’s St. Catharines Rebels travel team.

“Basically I lived in the gym for a number of years.”

He coached the first St. Catharines Rebels girls travel team when the organization started in 1992.  He coached his older daughter’s team for four years then took over his younger daughter Felicia’s team.

“They were the first (Ontario Basketball Association) Division 1 gold medal winners for the organization. The following year, the boys won a Division 1 title. I believe to this day those are the only two (Rebels) teams that have won a Division 1 championship.”

The D1 title in 2001 is one of the highlights of Pirillo’s coaching career.

“The girls had to win six straight games at the Provincial Cup to earn the gold medal and they finished with 44 wins and only one loss that season.”

Another big highlight was the friendship he developed with John Czyzewski, a coach of a Detroit team his girls beat in the finals of a tournament in Brantford. Czyzewski was an executive vice-president of the NBA’s Detroit Pistons.

“We had a battle in the championship team and the respect he had for our team led him to invite us to Auburn Hills, Mich.”

Czyzewski arranged for the CYO players to attend a Pistons game in a private booth and have their picture taken at centre court of the Palace at Auburn Hills.

“The kids all got bobbleheads and they all got to meet the players after the game. That is a great memory.”

Pirillo is still coaching in the Rebels travel organization and this season is in charge of the under-12 boys team.

He also convenes the novice house league which consists of 104 kids and is a member of the Rebels’ board of directors. He has been convening the house league for more than 20 years.

Pirillo was also the long-time main organizer of the annual high school girls basketball all-star games. The CYO organization took over the games when Brock stopped organizing them.