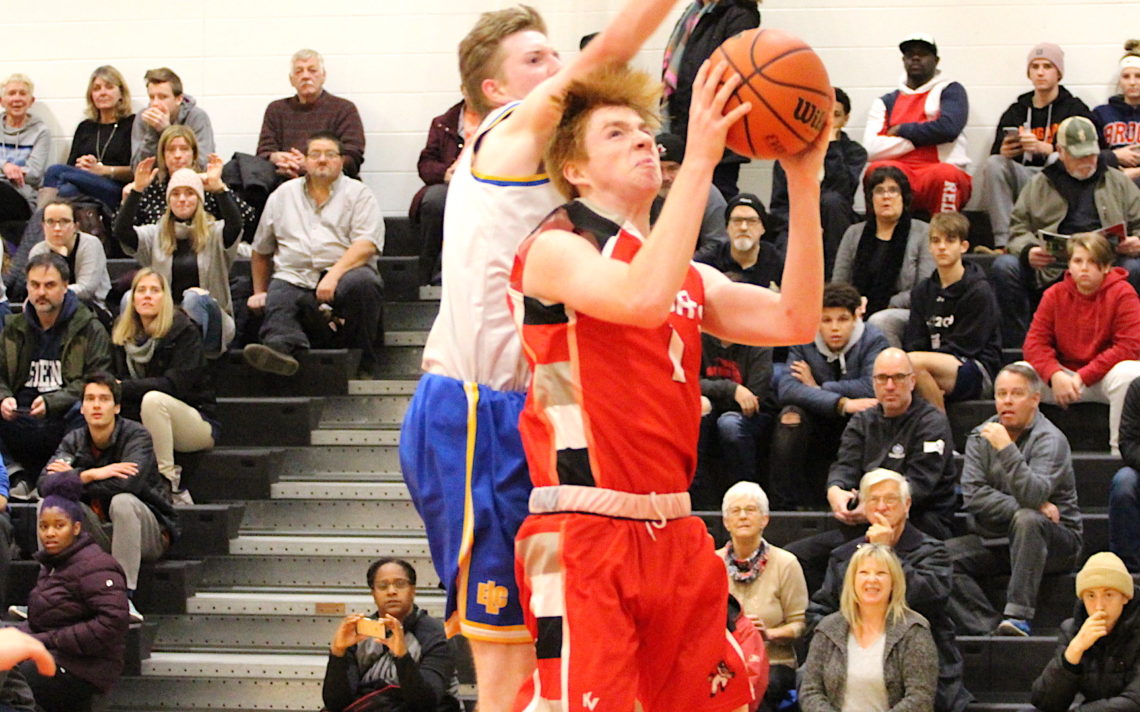 A quarter of a century ago, Mike Hurley earned a Standard High School Basketball Tournament most valuable player award for the then E.L. Crossley Chiefs.

Hurley was so dominant he was named MVP even through the Chiefs were eliminated in the semifinals.

Fast forward 25 years and Hurley’s son, T.J. Hurley, is in the running for an MVP of his own.

The younger Hurley poured in 32 points to pace the E.L. Crossley Cyclone past the Governor Simcoe Redcoats 72-58 in a championship round semifinal game Thursday night at the St. Catharines Collegiate.

The No. 2 seed Cyclone take on the No. 1 seed St. Francis Phoenix for the championship Friday at 7:45  p.m. at the Collegiate.

Hurley’s effort gives him 66 points heading into the finals, second overall in points to only Alexien Evseyev of the Sir Winston Churchill Bulldogs, who leads with 79 points.

“I’m not really worried about the awards. I just want to win the tournament with the team and the guys,” said T.J. Hurley, a 15-year-old, Grade 10 student.

T.J. admits he has heard all about his father, who coaches him with the Pelham Panthers.

T.J. enjoys playing for his father, who suited up for the Niagara College Knights and the Brock Badgers after his time at Crossley.

“It’s great. He was obviously a great player and a lot of the guys from the team he coaches are on Crossley so we’re running a lot of the same stuff.”

T.J. is playing his first season at the senior level.

“I think my skill set is there. It’s just the physicality of the game is a little tougher. I just have to grind down and play good defence,” he said.

“His basketball IQ is so high,” Bleich said. “He plays smart. He just has to get open and avoid the other team because they are going to double team him.”

Bleich had no reservations bringing Hurley to senior one year ahead of the norm.

“He can handle it,” he said. “With the elite level of travel he plays and the provincial team he plays for in the summer, he needs this for a challenge.

“As a player I went through the same thing. You need someone to push you every day in practice, so I think it’s great for him and he’s going to be a great player.”

The Cyclone had their hands full with the Redcoats, who battled hard to the end.

Bleich, too, tipped his cap to the effort put forth by his former school.

“Simcoe kept coming back and coming back,” he said. “We had a little spurt there in the third quarter where we put our defence on and they broke down. They was the turning point in the game, the full-court press.”

Simcoe coach Sean Feor had nothing bit praise for his charges.

“I just said to the boys it’s always tough talking a loss but that’s one of those losses where you don’t come out of the locker room hanging your head,” he said. “Crossley is a very talented team and the boys worked hard through every single minute.”

Feor feels the experience can only help his club down the road.

“Pat Woodburn (former Simcoe coach) used to always say to us your season isn’t measured in December,” Feor said. “As nice as it would be to have a Standard title and take that crown, for me it’s what happens in February. It’s a building process and this game certainly helped with that.”

Up next: E.L. Crossley vs. St. Francis in the championship final Friday at 7:30 p.m. at the St. Catharines Collegiate.