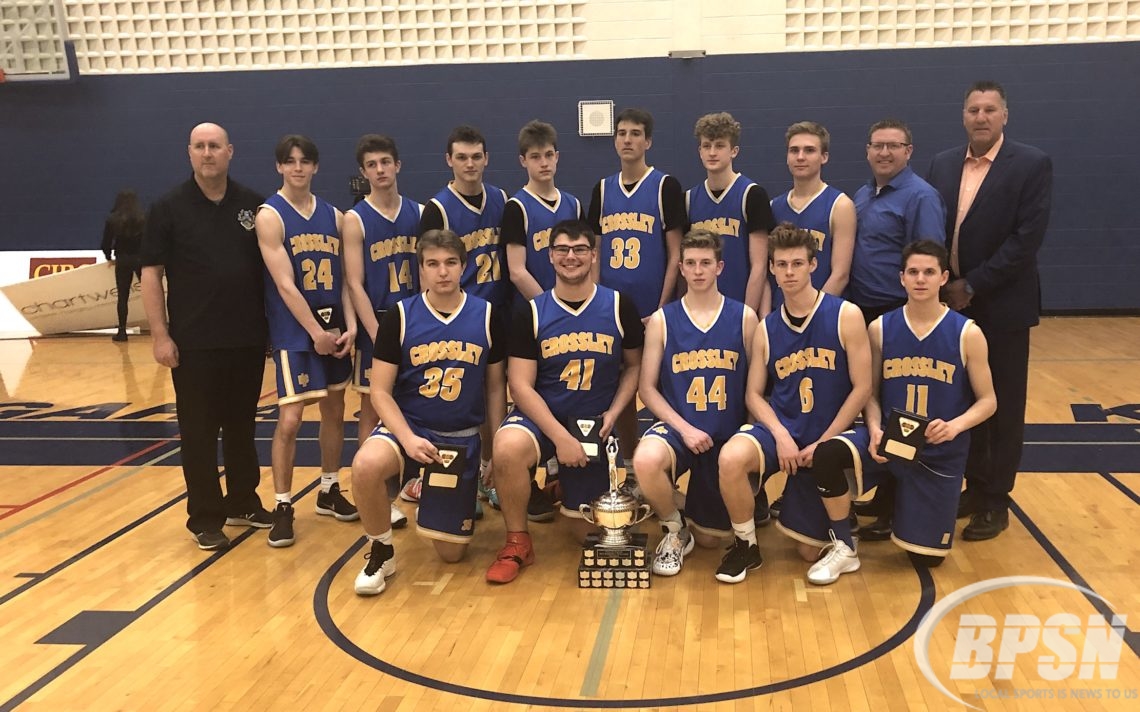 The E.L. Crossley Cyclone are back in the winner’s circle after 41 years.

The Cyclone topped the Notre Dame Fighting Irish 69-55 to capture their first Welland Tribune Basketball Tournament since 1979 and just their third overall.

The Cyclone knocked off the defending champion and 41-time tournament winners in the process.

“For the school, it’s really special,” Cyclone coach Brian Bleich said. “This has been a rivalry for years and usually E.L. Crossley goes to the consolation side and Notre Dame plays for the championship every year.

“It was nice to see the two teams go at it and see Crossley come out on top.”

Bleich said the victory hit home in more ways than one.

“For myself, and probably more than half the team with the boys playing in the Pelham program, we’ve worked many years and this is the payoff for that work from Grade 4 and Grade 5 and Grade 6.

“They were all in school together living in Pelham and we have a team that deserved it.”

Bleich also had something else on his mind after the death of his father, George Bleich, who passed away earlier this week. The death also hit home with Brian’s son, Riley, who netted seven points in the win.

“He would have wanted me to be here,” Brian Bleich said. “It was in the back of my head for weeks.

George Bleich passed away at the age of 92 from heart failure Tuesday.

Bleich said a big reason for the win was the Cyclone’s ability to limit Notre Dame’s big centre Shammar Campbell to just 10 points.

“I’ve watched a few of their games this year and it was to stop their inside game,” he said when asked for the pre-game strategy. “He finishes well at the basket and has long arms so our goal was to stop him from going inside and they were going to have to live and die with the three.”

Notre Dame coach Mark Gallagher felt the game turned on a couple of plays in the final quarter.

“I think we were down three and we had the ball twice. We turned it over once and missed a shot and they scored in transition and completely changed the momentum,” he said. “The way T.J. (Hurley) shoots and they score, they flipped the scoreboard on us pretty quickly.”

Gallagher tipped his cap to the Cyclone for a well executed game plan.

“We knew they were going to clog the key and make it hard for him to get the ball,” he said. “I thought early we got it in to him and then got it back out. We had a couple of good looks and we didn’t make those shots.”