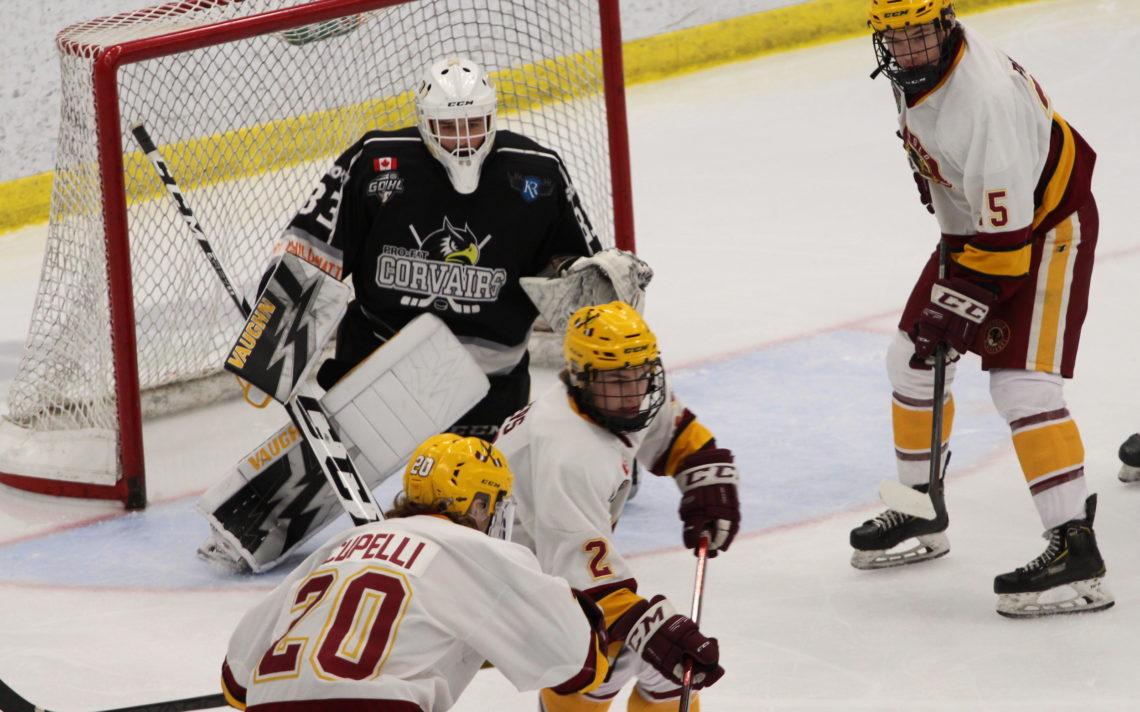 Instead, the Blackhawks find themselves down 2-0 following a 6-2 loss to the Corvairs in Game 2 of the Greater Ontario Junior Hockey League, Golden Horseshoe Conference series held Thursday night at the Vale Health and Wellness Centre in Port Colborne.

“We should have won last night (Game 1),” Barnes said. “We were I think the better team but tonight we just didn’t show up to play.

“I don’t know what it was. Maybe we went a little hard with some guys but there’s no excuse. There was really no excuse for laying an egg.”

The Blackhawks, who came within seconds of sending Game 1 into overtime, endured a rough start Thursday, falling behind 3-0 before the opening period was half over.

“We weren’t making plays tonight,” Barnes said. “In Game 1, we were in sync and playing a good structured game and were pretty smooth with our touches and breakouts and passes, but tonight was just a different story.”

Down so quickly, the Blackhawks couldn’t play a patient, conservative game.

“You have to start pressing. We didn’t really lay back but it’s Game 2 and we still have Game 3 to get back in there,” Barnes said. “It should be a close game every game between these two teams but we have to find a way to bring more than that.

“Credit to them. They came out harder than last night and they wanted it. Now, it’s up to us to respond.”

Nathaniel Krbavac got one goal back for the Hawks on a breakaway later in the first period but the Corvairs struck again early in the second for two more to move out to a 5-1 lead. The teams then exchanged goals later in the period.

The Hawks didn’t give starting goaltender Noah Fortuna much help and Barnes decided to give the veteran the third period off. Tucker Adams turned back all 14 shots he faced in the final 20 minutes.

“It wasn’t his (Fortuna’s) fault,” Barnes said. “He’s played a lot of hockey for us and we’re playing back-to-back and then it’s Saturday (Game 3) and it could be Monday and Tuesday back-to-back, so I told him to take his gear off and we’ll get Tucker some action.”

Barnes, a former Port Colborne Sailor who played at the old West Side Arena, said the Hawks had no problem switching their home games to Port so renovations could get underway earlier at the Thorold Arena.

“The boys were really excited to be here,” he said. “We have five Port guys on the team. No one was mad about not being in their own barn. Port has been nice enough to give us the (big dressing) room and the ice time we need.”

Caledonia forward Ethan Doyle with two goals and an assist.

Up next: Game 3 Saturday at Caledonia. Game 4 Monday at 7 p.m. in Port Colborne.