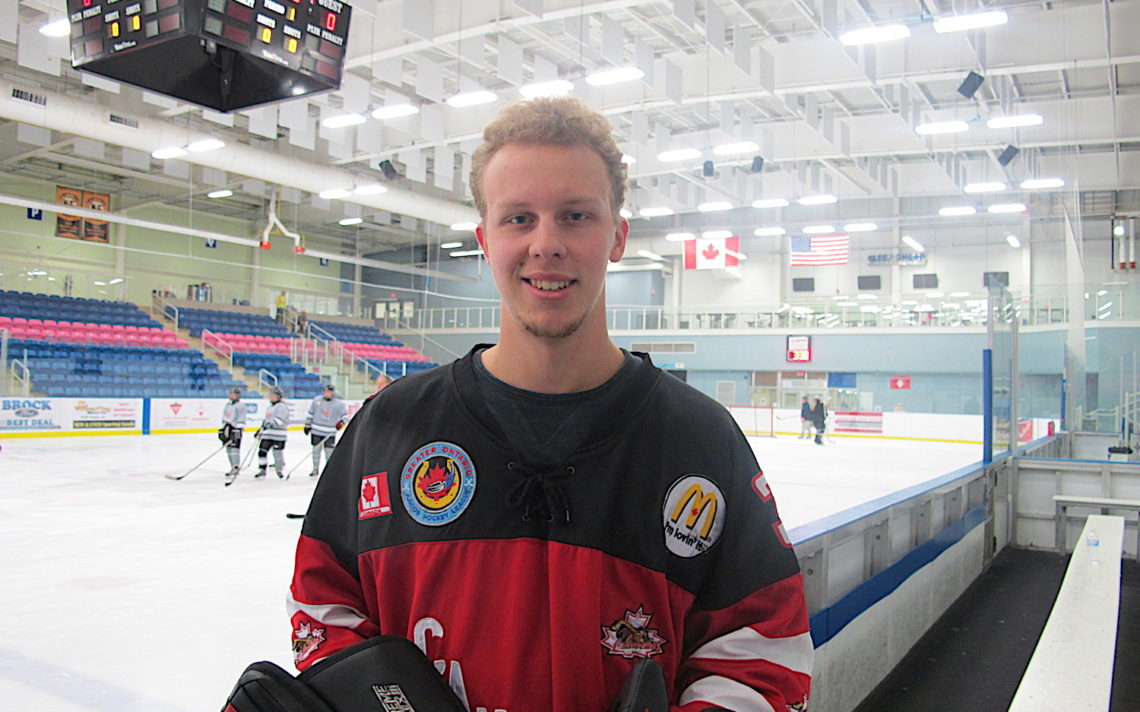 Confidence makes the difference for Moore

After bouncing around from the St. Catharines Falcons to the Caledonia Corvairs in his first couple of seasons of junior, the 19-year-old St. Catharines native has firmly entrenched himself as the No. 1 goaltender for the Niagara Falls Canucks.

It’s a far cry from earlier in his career when he ended up playing high school after being cut in St. Catharines as a 16-year-old and then junior C the next season after being sent down by the Corvairs.

“Frank (Canucks coach Frank Pietrangelo) gave me an opportunity and ever since I’ve got here made me feel good about myself,” Moore said. “From there it’s been uphill.”

Moore, who was drafted in the sixth round of the Ontario Hockey League draft by Kingston in 2014, admitted he was beginning to wonder if a junior career was in the cards for him.

“It’s more of a confidence thing. Once you start feeling down on yourself you have to work through it,” he said. “Once you find your spot you get rolling and you’re all set.

Pietrangelo sensed some doubt when he talked to Moore at the beginning of last season about joining the Canucks.

“When I contacted him he was a little big skeptical, obviously,” Pietrangelo said. “He’d been through it twice and wasn’t sure what was going to happen. We brought him in to be our second goalie but he came in and worked hard and has earned everything he’s got.

“It was tough for him to put trust into anybody. I don’t know what’s happened in the past but he’s been very, very good for us. He gives us a chance to win every night and that’s the main thing you want from your goaltender. You know what you’re getting from him every night.”

Indeed. Moore is tied for the Greater Ontario Junior Hockey League lead for wins with 12 to go along with a 2.32 goals-against average and .916 save percentage.

Moore chalked much of that success up to confidence.

“He’s a very laid back kid. That’s another attribute you don’t teach. Not much bothers him and the guys love him.”

That outlook helps Moore when he has an off night or permits a bad goal.

“You just try to not really worry about it and then at the next practice or game figure out what happens and correct it,” he said.

Apart from stopping the puck, Moore also excels at handling it.

“His puck handling ability is second to none,” Pietrangelo said. “I played in the NHL with Tom Barrasso and played against Martin Brodeaur and they changed the game because teams had to adjust when they played them. When we played New Jersey we had to adjust our game plan because if we shot the puck in, he’d shoot it back out. The game is so fast you don’t have time to think about that. You play one way and then you have to change your whole philosophy.”

“He’s so good with the puck. By far in the whole GOJHL I’ve yet to see another goalie handle the puck like this. It makes a difference in the game. He’s going to make mistakes — everybody does — but 99 percent of the time he makes the right play and helps our defencemen tremendously.

“It’s definitely an asset for us. Teams have to adjust the way they play against us.”

Moore said he’s always been good with the puck.

“Just growing up in minor hockey or when I had time in practices, I’d start shooting the puck around,” he said. “I think it takes some pressure off them getting hit in the corners. It’s like another defenceman back there, another set of eyes.”

Moore is concentrating on hockey for the time being and would like to extend his career at the Canadian university level.

The Canucks are home to Fort Erie Friday and in Caledonia Saturday. Niagara Falls sits in second place with a 15-6 record, one point behind the Covrairs for first and two up on the third-place Falcons.