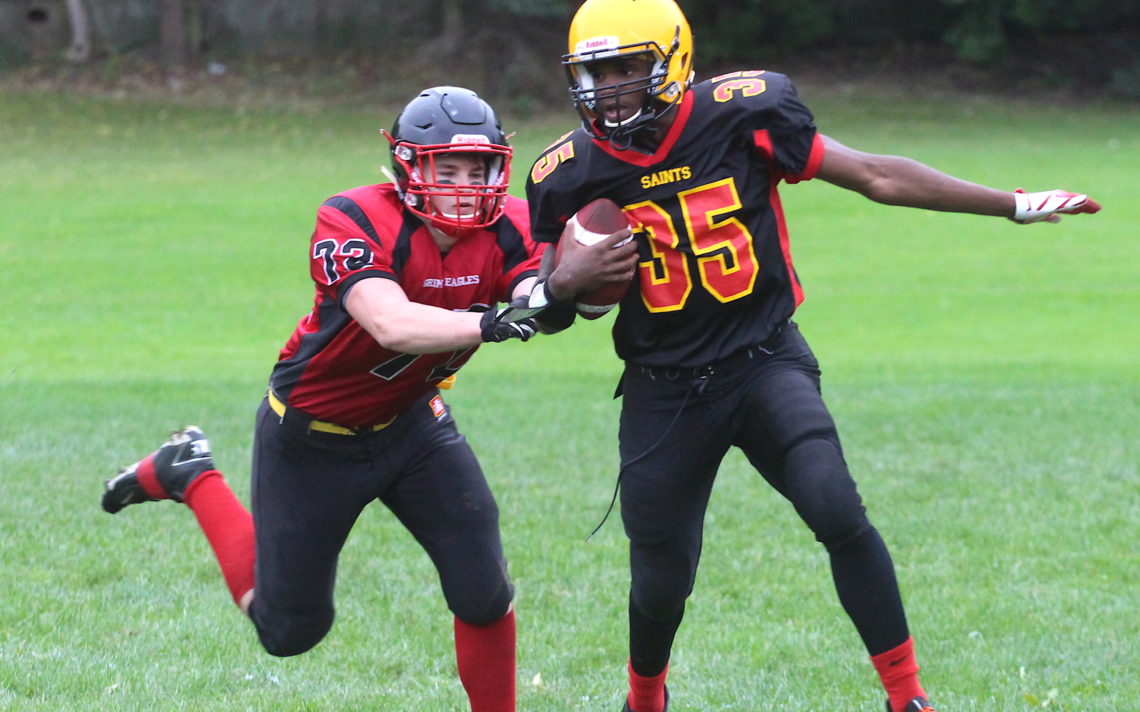 Thursday was another tough day for the St. Catharines Collegiate Saints football team and its head coach Nathan Greene.

Moments after Collegiate surrendered a pick six to fall behind 35-6 to the Grimsby Eagles less than four minutes into the second quarter, Greene signalled to the referees that his squad was forfeiting the Niagara Region High School Athletic Association Tier 2 game.

“Safety of our players is our primary concern and it wasn’t feasible to continue at that point in time,”  he said.

Much like his team’s first game when injuries had the Saints playing their fourth-string quarterback in the first half, the injury bug chomped hard again in the game versus GrImsby,

“We have five of our primary ballcarriers in our wildcat offence go down with injuries and I wasn’t going to ask someone who never handled the ball before to do it and put them in that position,” Greene said.

It wasn’t an easy decision to make.

“Our first priority is to protect the kids and I had to make a tough call,” he said. “In 23 years of coaching high school football, I have never had to pull my team off the field like that but I stand by my call much as I hated having to do it.”

Greene has an explanation for the injuries.

“We have a bunch of really good athletes who play other sports, but they don’t have the background in football to take the ongoing lumps and bruises that are indicative of a full game,” he said. “We had receiver-body types playing running back and they are not used to that type of thumping.

“We don’t have a true running back who can take on those lumps. We are spreading it out around a bunch of guys, but they are going down faster than we can replace them.”

Greene will reconvene his team Monday and hope for the best.

“The school has been around for almost 100 years — 2023 will be the 100th year — and there has been a football team at this school since 1928,” he said. “I am doing everything I can to make this program viable, but the way the division makeup is this year has made it tougher for us.”

Greene describes Collegiate as the only true single A school still fielding a football program.

“We used to have Eastdale, Port Colborne, Ridgeway-Crystal Beach and South Lincoln and we no longer have those schools that are under 400 school population to compete against any more,” he said. “We are struggling as a true single A school to play a school like Grimsby which is a triple A school.

“The numbers are against us but we are doing everything we can to make it happen.”

Greene admits he is concerned about the future of the program.

“No doubt it is a huge concern and the games aren’t going to get any easier,” he said. “We are playing a tough Simcoe team next week and we finish at Centennial as well.

“We will have to do our best and re-evaluate Monday.”

“I had never been in one or seen one where a team had to pull the ripcord,” he said. “We aren’t even at half yet, although, it is the longest quarter and a half that I have seen in my life.