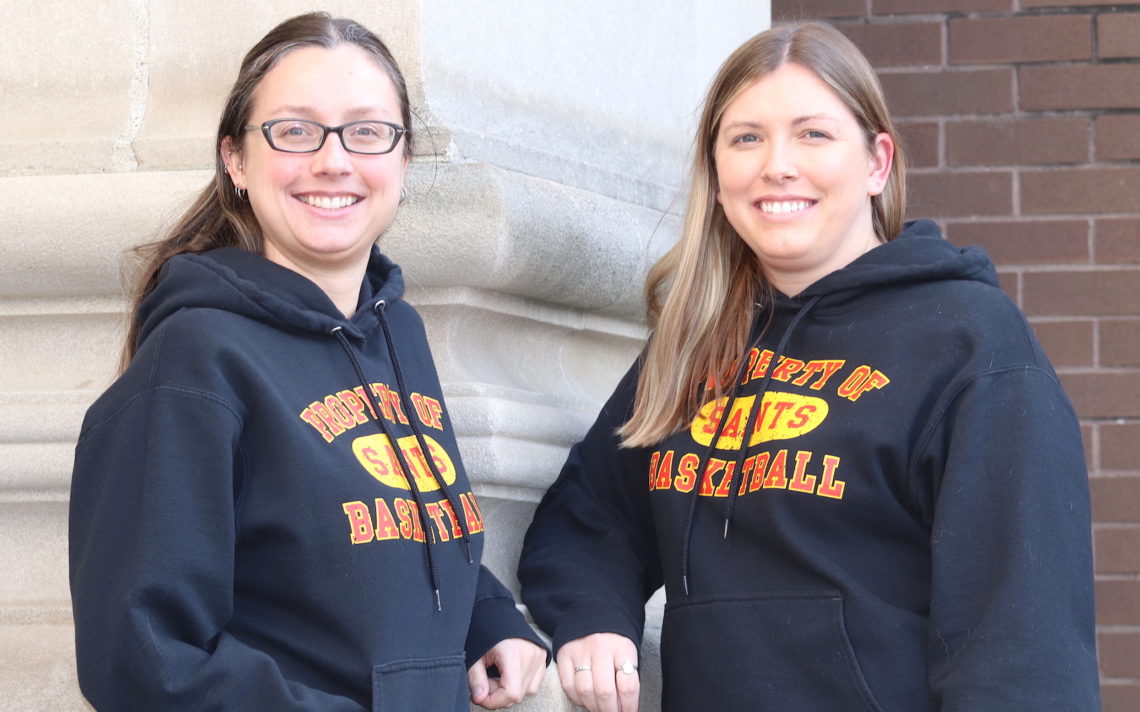 “We found out on Monday that we were coaching and tryouts were on Wednesday,” said Mauro, an English as a second language teacher at Collegiate.

“When we got into it, it just kind of happened,” said Campbell, a biology teacher at the school.

The pair got down to business immediately.

“We sat them down and told them ‘This is what you have; two female coaches. If anyone has a problem having female coaches, there’s the door no matter who you are. If you are here, you have to be all in and trust our vision, trust our process and you have to trust that we know what we are doing.’ We didn’t have problem with respect and we had buy-in right away,” Campbell said.

That initial buy-in was aided by circumstance. 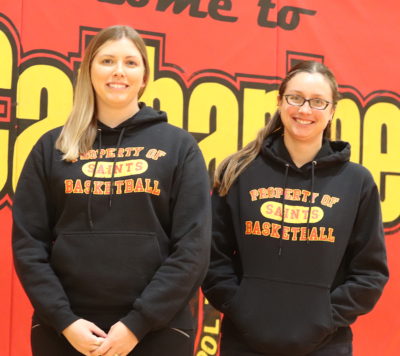 “It helped that we had a pretty good team the first year we coached,” Campbell said. “We won the first and second tournaments we played and that helped when they saw what we were doing with them led to winning.”

The pair’s vision is based on family.

“All of the players love basketball and we are trying to make it more of a community and not just a team,” Mauro said.

The women run four or five boys practices a week at 7 a.m. and also organize team dinners in the evening.

“In the first year, we had great buy-in with kids who bought into the system of play but it was taking it beyond just basketball and making it a family,” Mauro said. “We often talk about it being a basketball family at Collegiate and making it that safe space for a lot of our kids. They can come to play but also have that support system.”

The team’s process begins and ends with working hard.

“We demand a lot of our kids all the time both on and off the court; being leaders at school; being here at 7 a.m. to practise and work hard,” Mauro said.

Bus tickets are a necessary part of the equation.

“Because of the programming we have here, some of our kids are not necessarily within walking distance and the boys season is in the winter,” Campbell said. “Not all of them have someone who can get them here and they don’t have their own transportation.”

She was always on the hunt for more tickets.

“The vice principal was always turning around in the hallway when he saw me during basketball season because he knew that I was coming for more bus tickets,” Campbell said, with a laugh. “Even though it seems like it is something as simple as a bus ticket, money is tight and a bus pass is not an option for everybody. We made sure that they had all the means necessary to get here.”

The women also have clear principles when it comes to playing time.

“We make it clear that this is a team and they all have a role and they all have importance. Playing time isn’t based 100 per cent on skill and talent,” Campbell said. “That is important to us because we like to win but when it came down to certain moments, we needed to know that the ones out there with the skills had also been working hard, learning plays, participating and becoming jelled with the other players.”

They looked elsewhere on their bench if that wasn’t the case.

“We might use someone who had a better work ethic who we knew would fight harder, especially in critical moments, and someone we knew who wouldn’t run out of gas because they are always here.”

The two have also implemented a structure to the team that is evident to anyone who watches the Saints play.

“Even outside of the basketball, we have put in a ton of structure with going to class and getting good marks,” Campbell said. “We have had kids who hadn’t been doing great in class and they came to practices but they sat on the sidelines and did homework. We have challenged them to meet our expectations and every one of them has done it every single time. Adding that structure and high expectations has been super successful for us.”

That structure and discipline has been key to the team’s competitiveness the past few seasons.

Mauro and Campbell also coach the Tier 2 varsity girls basketball team at the school and that requires a different approach. 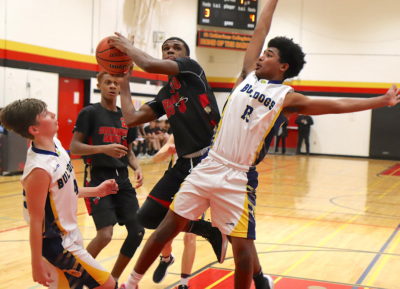 “It is definitely difficult trying to manage all the different ages from Grade 9 to Grade 12 on one team and we also run it as more of a developmental team,” said Campbell, who also coaches senior boys volleyball at the school with D’Arcy McCardle. “It’s more of an instructional, developmental learning experience but it still takes as much time.”

The girls practise two or three times a week after school and the team has a larger roster than the boys to guarantee no one gets cut.

As the two have coached together, their roles have become more defined.

“Adria has been coaching the girls program longer than I have been here so she takes more of a lead in all of that and I am there more to support her along the way,” Mauro said. “In the boys program, we divide it more evenly because we both started coaching it at the same time.”

Each brings different analytical skills to the boys team.

“Because she coaches at the travel level, she sees things faster than I do. When we are in moments when a split-second decision needs to be made, she is taking a leadership role,” said Campbell, who also coaches the girls soccer team at Collegiate with Lori White. “I often sit back when that is happening and I think sometimes I see the next three steps a little faster. ‘We should do this because this is going to happen and we are going to need that.’ We play really well to each other’s strengths.”

The women are equally enthralled with coaching.

“I love the relationships from coaching in school and outside of school. I love seeing the development from the very first tryout and seeing their growth not just related to basketball,” Mauro said. “It’s their growth as individuals beyond basketball. Basketball at Collegiate is a vehicle that the kids can use for self-improvement for other opportunities. I started coaching because I loved basketball and I continued because I love the relationships with the kids.”

Campbell loves to coach and the connections she makes with the kids outside of the classroom.

“You get to see them as the individuals they are beyond a student just sitting in your classroom for 75 minutes. I love building that sense of community and I really enjoy my time here now that I am in my fifth year.”

Before she arrived at Collegiate, she also taught at Laura Secord, Thorold, Grimsby and Centennial. Sometimes Campbell taught at two or three schools in the same year.

“I even coached at some of those places but I never had that community feel to being there and being a part of building not just basketball and sports, but building up these kids and making them better versions of themselves,” the University of Guelph and D’Youville teachers college grad said. “They are all great no matter who they are or what they are doing but it’s to show them there is more and be a part of that journey for them.”

Mauro, a Centennial grad who went to do her undergraduate and teachers degrees at Brock, is disappointed that the COVID-19 pandemic has thrown a big wrench in their program building at Collegiate.

“We had great buy-in from our first set of guys and they got the Grade 11s to buy in,” she said. “We have really been building on a lot of momentum and it’s difficult knowing that next year when we start again that we likely won’t have any returning players. It’s going to be brand new players who have seen us at the junior level but haven’t played with us before. Next year, it will be like almost starting back at the beginning.” 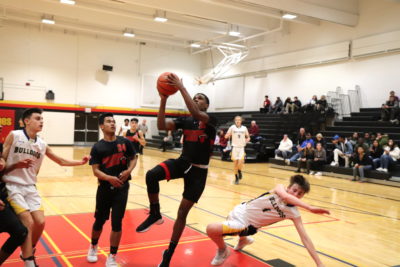 Mauro and Campbell would have loved to have kept their players engaged in the sport during the pandemic but that wasn’t feasible.

“Our kids have a lot of barriers. We toyed with it and we went back and forth but we didn’t want to give some of the kids another reason to feel two steps behind when they already probably might feel like that,” said Mauro, who has coached with the Niagara Girls Basketball Academy’s Juel team for the past decade. “A couple of kids who still wanted to be playing reached out and we told them the best thing they could do is safely stay in shape on their own so they are ready to come back just as strong next year.”

Both women are missing coaching Collegiate basketball in a big way. This past week would have been the Standard boys basketball tournament and Campbell’s social media feeds have been flooded with basketball memories.

“We were mostly the ones supervising the gym at lunch and we would have basketball players at our door asking us to open the gym every day,” Campbell said. “Last year we were always saying to ourselves ‘When am I going to get a normal lunch?’ Now I would give anything to have basketball players pounding on my door or begging for my keys to open the gym or watching them running around.”

“When we are in the middle of the season, Adria and I often talk about ‘Omigosh, we have basketball at 7’ or ‘We are just leaving the gym now.’ It always seems that there is something to do and now not having basketball at school seems so weird,” she said.”It is weird not getting here at 7 a.m. every day and during snowstorms to have that connection. We both have a lot more free time but we would give anything to have basketball back and that busyness. It’s just not the same.”