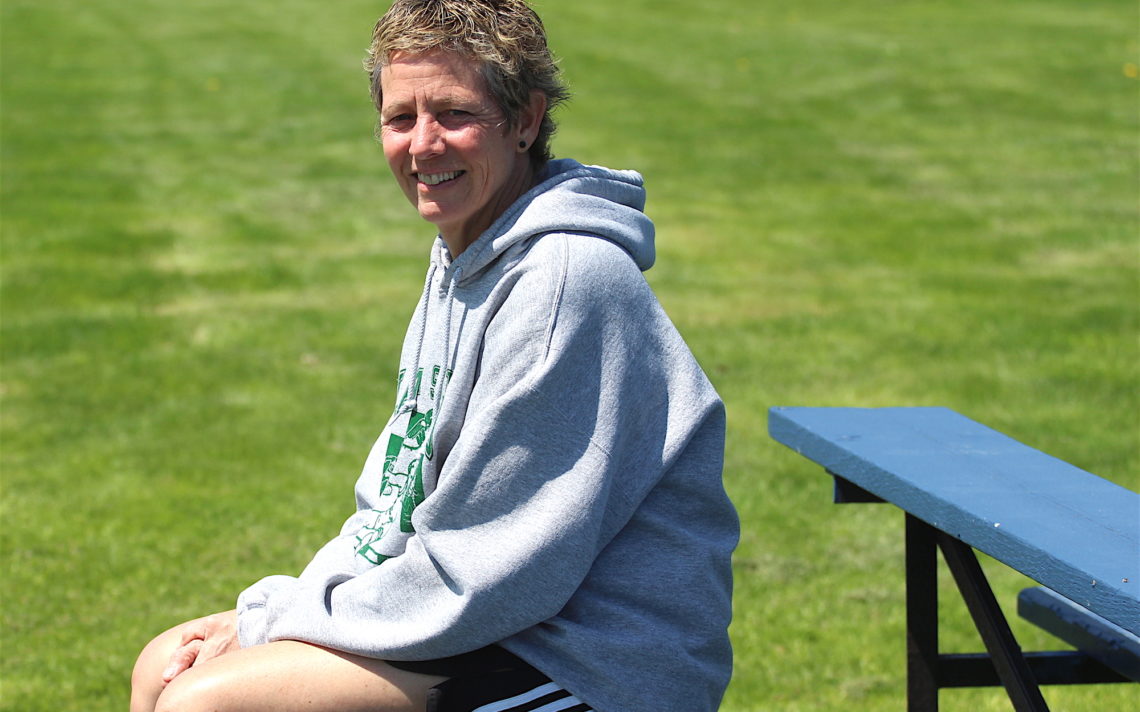 The remarkable 29-year coaching and teaching career of Cindy Crosbie is rapidly coming to an end.

Affectionately called Cros by students and teachers alike, the St. Catharines native had teaching stints at South Lincoln, West Park and Merritton before arriving at Laura Secord 21 years ago.

The former scholarship fastball player and member of the University of Detroit’s sports hall of fame has been a fixture at Niagara high school sporting events for nearly three decades. Whatever the sport, winning or losing, and in good times and bad, Crosbie never got rattled, always had a smile on her face and always coached for the right reasons.

“If they had it, I probably coached it at some point during school,” she said.

The days she left the school at the end of classes were few and far between.

“(It was) usually after track and field OFSAA (Ontario Federation of School Athletic Associations),” she said. “Those three weeks in June were the only time.”

Her motivation for coaching came from the teachers who did the same thing for her when she attended elementary schools and St. Catharines Collegiate. Among that long list of mentors were Helen Henderson, Larry Miller, Dean Douglas, Walt Szpilewski, Lorne Adams and Lenke Szathmary.

“All of them were amazing coaches and they just loved it,” she said. “And that’s one of the reasons I went into coaching because I had great teachers and role models.

“I knew I wanted to do something with kids and it worked out that I was able to get my teaching degree in Michigan.”

She was hoping to stay in the States to teach and coach fastball, but America’s loss was Canada’s and her students’ gain.

“In the classroom and in phys-ed, I was able to get better relationships than say a math or an English teacher, but it’s outside (of school) that was special,” she said. “It’s the lunches you eat together, the transportation to and from events, the weekends and all that kind of stuff.

“I loved it. I can’t even imagine teaching and not doing that.”

She believes her first five years of teaching and coaching at South Lincoln set the foundation for her entire career.

“It was a good fit,” she said. “We had great young teachers, the admin (administration) was awesome and we had a good group of kids.”

Many of those good kids have gone on to have long and successful careers as teachers and coaches.

“A lot of them told us that it was because of all the experiences that they had with us that they wanted to get into that too.”

In her retirement speech, she is planning to issue a friendly warning.

“You have be careful what you do as a student because so many of my teachers, I ended working for them.”

In her time at Secord, she cherished her personal and coaching relationship with Andrew Yap, who retired two years ago.

“I taught with him for 26 of my 29 years and I don’t think we ever missed an OFSAA (track and field championship),” she said. “In his last year, I thought for the first time he wasn’t going to get to OFSAA, but we got there with one athlete.”

She also enjoyed all the trips she made to OFSAA for wrestling.

“That group (other coaches) was amazing.”

Interviewed at Tuesday’s Niagara Region High School Athletic Association qualifying meet at the Niagara Olympic Club, Crosbie said she isn’t counting the days down until retirement and there’s no app on her phone tracking the final day.

“I know it’s the last of this and the last of that, but this just seems like another track meet,” she said. “It does feel that it is the right time for me to go, especially having Tim (Jabs) ready. I’ve made that transition and they are going to do their own thing.”

She feels a special bond with this year’s group of graduating Second student-athletes and it’s somewhat symbolic that they are all leaving at the same time.

“I told them that when they came in Grade 9 that we were going to walk out together,” Crosbie said. “A lot of them have been in intramural with me and on my athletic council and I’ve taken some of them the last few years to leadership camp.

“They are gym rats and they have been with me through the Rankin Run. It’s a nice group of kids and if they weren’t leaving, it would be a lot more emotional for me to go.”

One of that group of kids is Grade 12 student Kaelyn Emslie. Emslie is a huge fan of Crosbie.

This past weekend, Crosbie was part of a trivia night that raised more than $7,000 for the Rankin Run and was recently was part of a garage sale that also raised a couple of thousand dollars for charity.

“She’s a coach of everything, she is a gym teacher and she is a track mom,” she said, “My brother (Connor) is in Grade 9 and I’m afraid that he is losing such a great teacher.”

Crosbie will also be missed by her colleagues.

“She is a huge loss just because she is so positive, she is involved in everything, she is on every committee there is and if you need something, you only have to ask her and she is the first person to say yes,” NRHSAA athletic convenor Rina Rode said. “And she is so great with the kids too.”

Crosbie has advised all her replacements at Secord to do it their way and do what feels right for them.

“They will have their passions and I had mine,” she said “You can’t do what your predecessors did. You have to do what is right for you, your family and your situation.”

She has nothing major planned for her retirement other than a late-summer excursion to Newfoundland with her parents.

“My only thing is I want to be on the water with a coffee in my hand for the first day of school,” she said. “I don’t care what body of water it’s on.”

She believes her spare time will be filled with other activities.

“They always tell you not to go back to your school after your retired because everyone else is still running around like crazy.”

When asked about the future of high school athletics, Crosbie admits she is a little scared.

“Running these events, it’s still all the old guard,” she said. “At our last NRHSAA meeting, they felt in 10 years there might not even be high school athletics because it it harder to get kids out.”