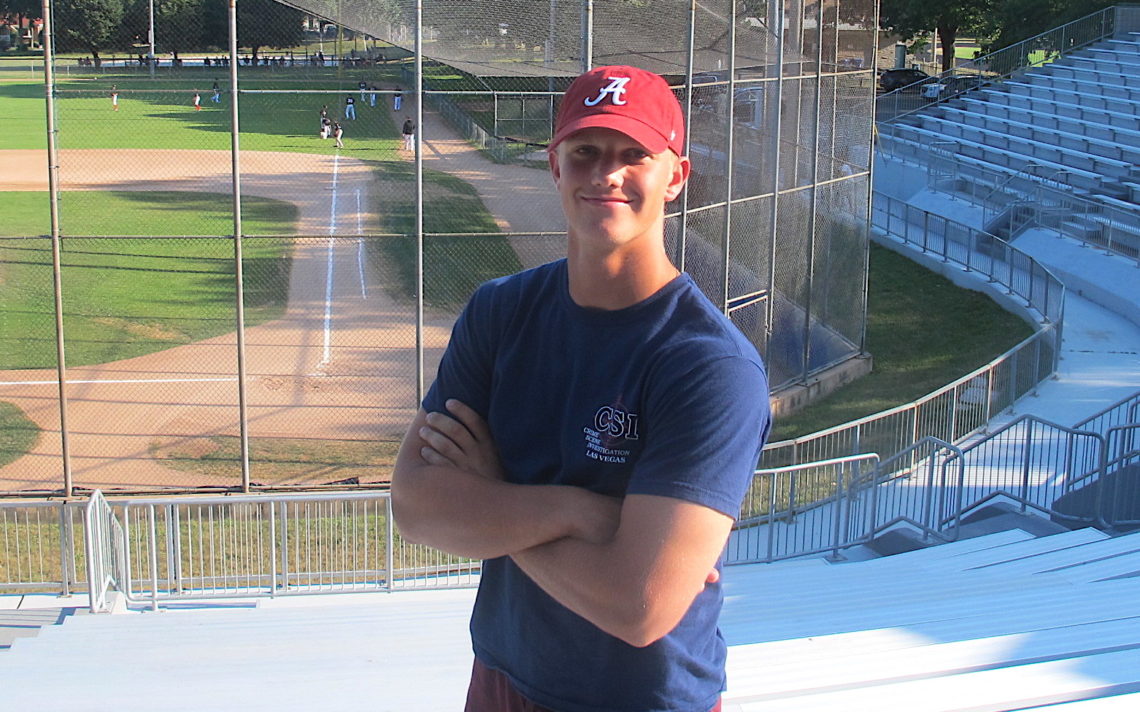 Owen Diodati came to the realization that to be the best, he had to compete against the best.

That revelation led the 16-year-old Niagara Falls resident to change course and accept a scholarship to play baseball from the University of Alabama starting in the fall of 2019.

Diodati, who is slated to attend Grade 12 at A.N. Myer this fall, had agreed to a deal to play at  Xavier University in Cincinnati but recently de-committed and signed on with the Crimson Tide.

“It was definitely a hard decision,” said Diodati, who began his baseball career in the Greater Niagara Baseball Association. “There are no guarantees, obviously. After thinking about it and talking to my friends and my family and my coaches, I felt that I had to take a step back and reevaluate and see where I was.

“Thankfully, this situation worked itself out and I was given the opportunity to take a look and agree to a deal with Alabama.”

Diodati said suiting up for the Canadian National Team in Florida and playing in exhibition games in extended spring training and more games in the Dominican Republic against Dominican Summer League teams caused him to reflect on his original commitment.

“I think it gave me an opportunity to evaluate things and look at where my talent was at and where I was at as a player,” he said. “It gave me a thought and kind of opened the door for me to understand and realize the potential I have and what level of ball I should be playing at.

“I felt it was best for me if I stepped back and took another look at things. I’m still young and I want to make the best decision for me.”

Diodati feels playing in the Southeastern Conference (SEC) will give him the best shot at a pro career.

“I wanted to play in a top conference against top competition and really push myself and give me hopefully an opportunity to play pro ball at the highest level,” he said. “I feel I made a good decision and I’m happy with where I am at now. I think it’s a good fit for me from a baseball and academic standpoint.”

Diodati, who may pursue a duel major in law and business, was blown away when he visited the school recently.

“I just visited and it was unbelievable. Talk about a school that has athletics. The campus is beautiful. The football stadium is the biggest thing I’ve ever seen and the baseball stadium is new $43 million project,” he said. “I’m really pleased with the school and the coaching staff. Everything about Alabama was unbelievable.”

Diodati, who is listed a 6-foot-3, 200 pounds, is a left-handed hitting catcher.

Diodati was impressed Alabama looked at him as a complete player.

“The thing that really blew me away was they want to see if they can develop me as a catcher.  It makes you much more valuable in the draft if you can play behind the plate,” he said.

He will also get a chance to play some first base and left field.

“I really like that. It’s going to give me an opportunity to learn to be versatile.”

Diodati will now turn his attention to his summer team, the Great Lakes Canadians, and then head to the East Coast Pro Tournament at the end of the month.

He is also slated to compete for a spot on the junior national team.

“It’s going to be a challenge because I’m younger but if I play my game I think I have a shot at it and also for the following year.”

He admitted his summer is a lot less stressful now that his future has been mapped out.

“It’s definitely a relief for me. I know where I am going and I know what I need to do to play at the highest level. Now it’s about stepping back and focusing on my game.  Obviously I want to perform my best every game but now I can focus on working on the defensive side and polishing up the bat a bit more. It’s the little things now.

“It’s going to be really good for me.”