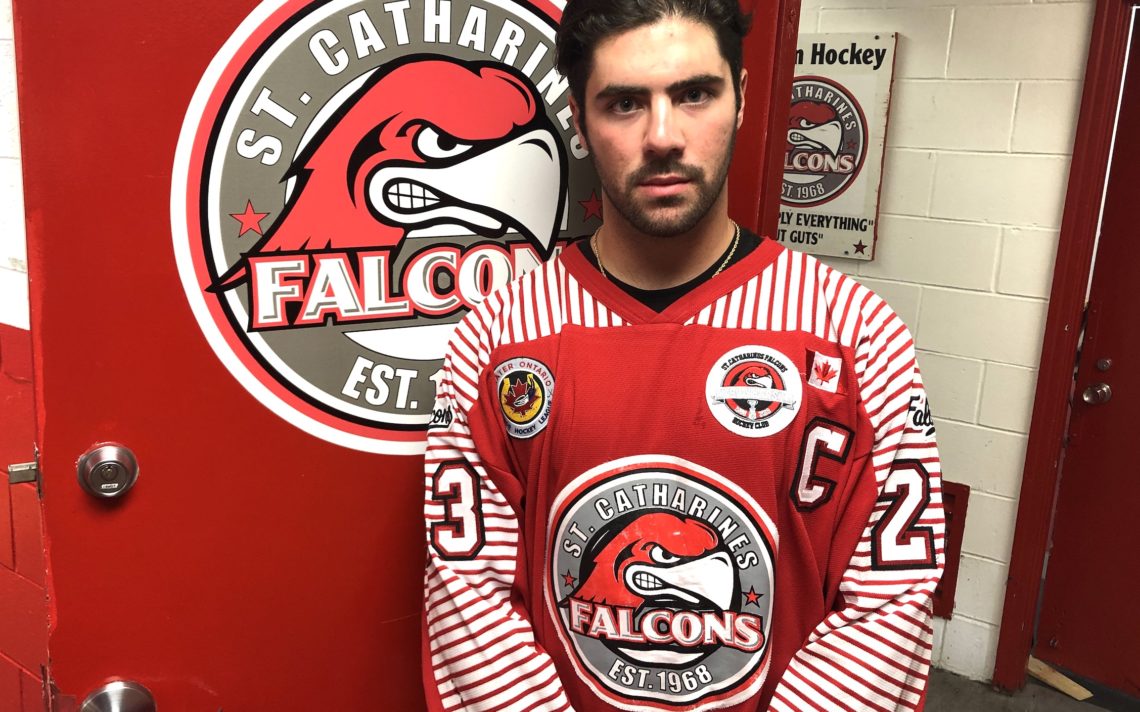 Brady Caruso set the bar high for his final season of junior hockey.

The 21-year-old Sault Ste. Marie native was named captain of the St. Catharines Falcons and was hopeful of competing for a Golden Horseshoe championship and Sutherland Cup.

“It’s definitely disappointing, that’s the first emotion that comes to mind,” Caruso said.  “It’s frustrating too. Taking my whole last year away plus the playoffs the year before is kind of hard to take.

“It’s not anything I’ve ever experienced before so it’s hard to put into words.”

Falcons coach Tyler Bielby was so impressed he gave Caruso the captain’s C in training camp.

“Obviously, I had high hopes for this year coming in as a leader and a returning player,” Caruso said. “I felt there were a lot of things we were going to accomplish as a team and personally.

The Falcons were on the ice for several weeks last fall and even got into some exhibition scrimmages before several members of the team tested positive which forced them to shutdown for a couple of weeks.

When they returned, Caruso still had hopes some type of season could be salvaged.

“It was promising for the first couple of months where we were on the ice and then we were able to get back on after the scare, but after Christmas when we had the lockdown and the restrictions rose, then I started to realize it wasn’t looking too good,” he said.

Still, Caruso didn’t want to throw in the towel on the season.

“You never want to give up hope until it’s official. You want to stay ready and prepared in case you do come back, but after that lockdown it wasn’t looking too good.”

Caruso loved his time with the Falcons.

“I had an amazing time,” he said. “The staff was amazing. I couldn’t have asked for a better group of people involved there. For me, the biggest thing was group of guys we had in the lockeroom both years I was there — more so last year — we had such a tight-knit group of guys. I always enjoyed coming to the rink and seeing everyone everyday and getting to work.

“The games, too, and competing every night is always something that is going to be in my blood. Just being around the rink and around the guys is something I looked forward to everyday.”

Caruso, who flew home at Christmas, returned to St. Catharines a couple of months later to retrieve his belongings but wasn’t able to hook up with any of his teammates.

“I haven’t seen the guys in person since before Christmas,” he said.

Caruso is taking on line courses at Brock and considering his options to play next season.

“There’s not really anything that fills the void quite as much for me as playing does,” he said. “It’s been good for me to focus on school and get a couple of extra credits out of the way and focus on training and getting in shape and spending time with family. There’s definitely been things I’ve been able to do in place of that, but there’s nothing that’s quite like being on the ice for me.”