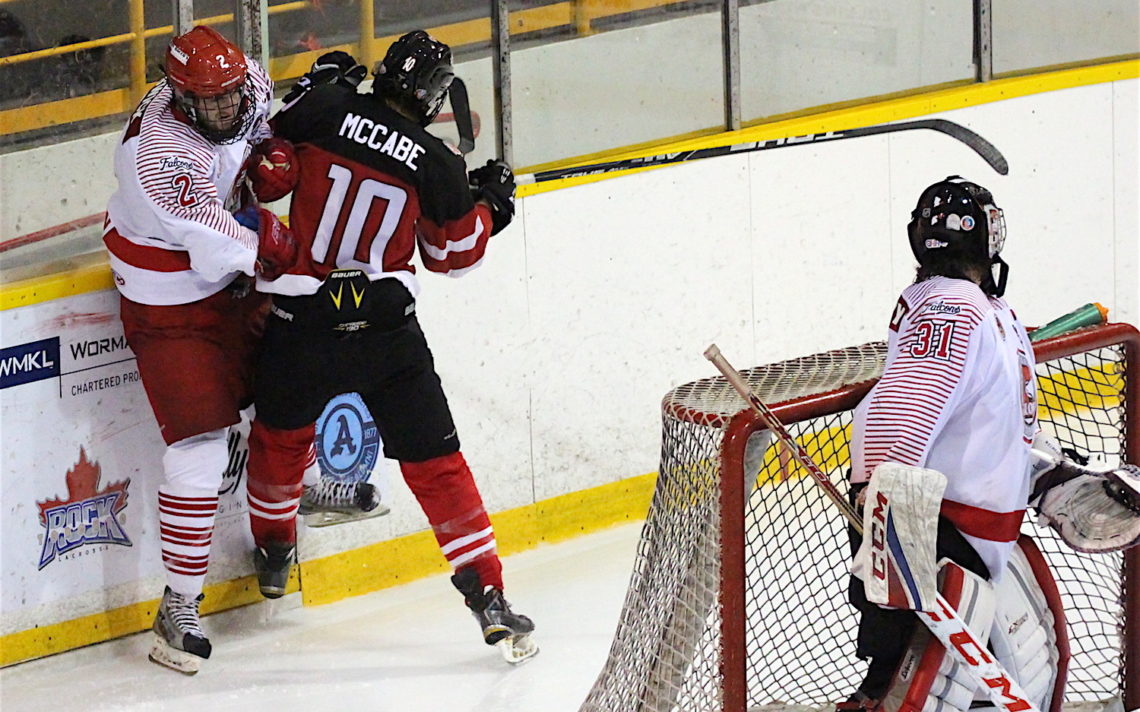 Canucks bounce back from slow start

The Niagara Falls Canucks have turned things around after a tough start to the season. PHOTO BY: BERNIE PUCHALSKI

The Niagara Falls Canucks found out quickly how important defence is going to be to the success of their club this season.

The Canucks came into the campaign with high hopes but got off to a mediocre start with just two wins in their first six games before reeling off an impressive eight-game winning streak.

Canucks coach Frank Pietrangelo said the team quickly realized they had to get back to basics in order to turn things around.

“We weren’t happy with the way we were playing and we weren’t scoring, that was our biggest thing and our power play was down,” Pietrangelo said. “We started taking care of our own end and made a commitment to defence and started to realize that we don’t need six or seven goals a night to win if we play well defensively.

“Once we bought into that we reeled off eight in a row and turned the thing around a little bit.”

“We know we have a good hockey club here, an experienced group and a lot of these kids have been with me in the past,” he said. “They saw what we were doing wasn’t working and we had to turn things around.

“It wasn’t very tough for everyone to buy in because when you’re not winning games you’ve got to try different things. We knew we had it in us and knew we would be a good hockey club. It was just a matter of when it would all start clicking together.”

Pietrangelo felt there was no sense of panic just because the team didn’t come roaring out of the gate.

“Our first six games Frank Pucci, Owen Green and Garrett Downie hadn’t scored and Frank led our team last year so we knew these guys were going to start to score,” he said. “They have proven they can score at this level and it was just a matter of time before things started to go their way.

“It’s not about panicking. It’s about playing the right way and getting good goaltending every night.”

The Canucks found out the league has been very competitive from top to bottom so far. Even the winless Buffalo Regals are markedly improved and give teams a competitive game most nights.

“This league is tough. We’ve seen Pelham knock off St. Catharines and we’ve seen underdog teams beat teams so you have to be ready to play,” Pietrangelo said. “There aren’t many nights off — I don’t think there are any — and if you’re not ready to play you’re going to lose.

“The parity is there so what we needed to do is play the right way and stick to what makes us successful and we knew the scoring would come around.”

The Canucks have been solid from Day 1 in their own end led by Zach Moore in goal (2.32 goals-against average, .917 save percentage) and a deep and veteran core of defenders led by captain Andrew Barbeau and mobile Ryan Mooney. Toss in Matthew Thorpe, back from the Quebec Major Junior Hockey League, and returnees Dillon Hill and Tanner Brown and the Canucks are more than covered on the blue line.

“They have been solid as a rock,” Pietrangelo said of his defence. “They have been very, very good for us night in and night out. I think that is one of the strengths of our team, the consistency that we get back there.”

The Canucks are home to Fort Erie Friday and in Welland Sunday.