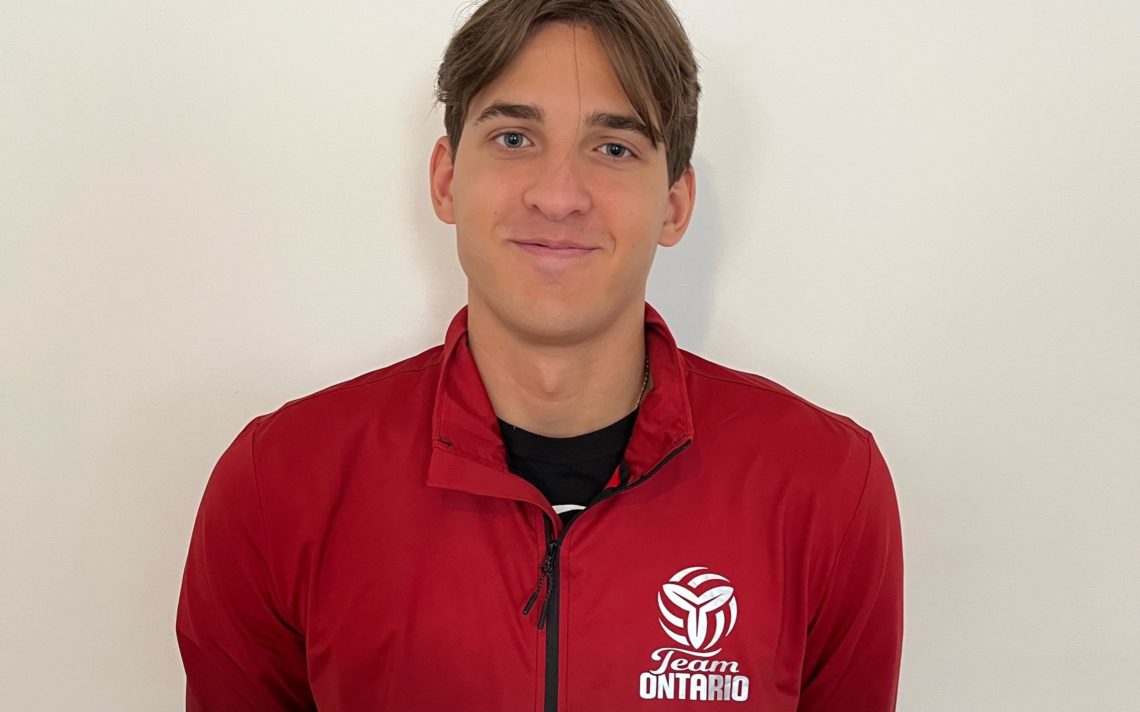 Nik Mitrovic was overwhelmed with joy when he heard the news he had been selected to the men’s volleyball team that would represent Ontario at the Niagara 2022 Canada Summer Games.

“My cousin Alex (Mrkalj), he played in the previous Summer Games, and he’s a role model of mine that I always looked up to,” the 17-year-old Niagara Falls resident said. “It has been a dream of mine since I was 14 to play in these Games so finally being told that I’m going to be playing in them was just amazing.”

Mrkalj introduced him to the sport when he was 10 and Mitrovic has not looked back. He has been a member of Team Ontario since the U15 level and he was member of the Canadian Youth National Team in 2019-20 and 2020-21. This past year, he won silver at provincials and was named an all-star, and placed fourth at nationals.

The selection process for the Canada Games started with players submitting a video. Thirty athletes were then chosen for a two-day training camp and from that came a final one-week training camp where 18 players were invited to attend.

“It was nerve-wracking because having the Games in Niagara, I just wanted to be part of the team so badly,” the A.N. Myer graduate said. “But I just tried to be myself and I just thought if I just play how I usually play then that was my best shot of making the team.”

At the end of the camp, the 6-foot-5 left side was told that he was one of 12 players selected for the team.

Ontario opened play Tuesday at Canada Games Park against Nova Scotia and it was the start of a great week for Mitrovic.

“It’s just being able to represent Ontario and playing with some of my best friends from my volleyball community. It’s also just having the opportunity to play in my hometown and have my family, friends, everyone support me. It should be fun.”

Team Ontario had been training for the past two weeks at Mohawk College and arrive in Niagara earlier this week.

Mitrovic has high expectations for the squad.

“We have a really awesome team, a really great group of guys, great athletes and good players, so I definitely think we have a shot of going for the gold.”

When the Games are over, he will be heading to Queen’s to play scholarship volleyball and study economics.

“It’s just so all around, great volleyball and great academics. I just felt a really good vibe when I went there on my visit from the coach and the team. I felt kind of at home there.”

His Games’ experience is a good way to jumpstart his collegiate career.

“It is going to be some high-level volleyball so it’ll be a good transition to university. To jump from club to provincial to university is pretty big so it’s great, a great experience,” the Pakmen Volleyball Club member said. “My goals for my first year at Queens are definitely to try to set my spot to get on the court, hopefully get a starting role and definitely try and go for a championship with the team.”

He feels he has made improvements mentally and physically in his game over the past few years.

“With COVID it was tough, so it’s just that mental side, being able to understand being on and off at times. You just gotta work out and be mentally strong,” he said. “ It’s not just the on-court stuff. The off-court stuff is a really big help and it will take you far.”

Mitrovic started playing club volleyball with the Niagara Rapids, playing his first and second seasons at the under-13 level. When he was 13, he joined the Pakmen at the under-14 level. As stated earlier, he has been with the Team Ontario since the under-15 level.

“I think it’s been great just being in the program,” he said. “Every summer I’ve been able to train with them and really get better with the program.”