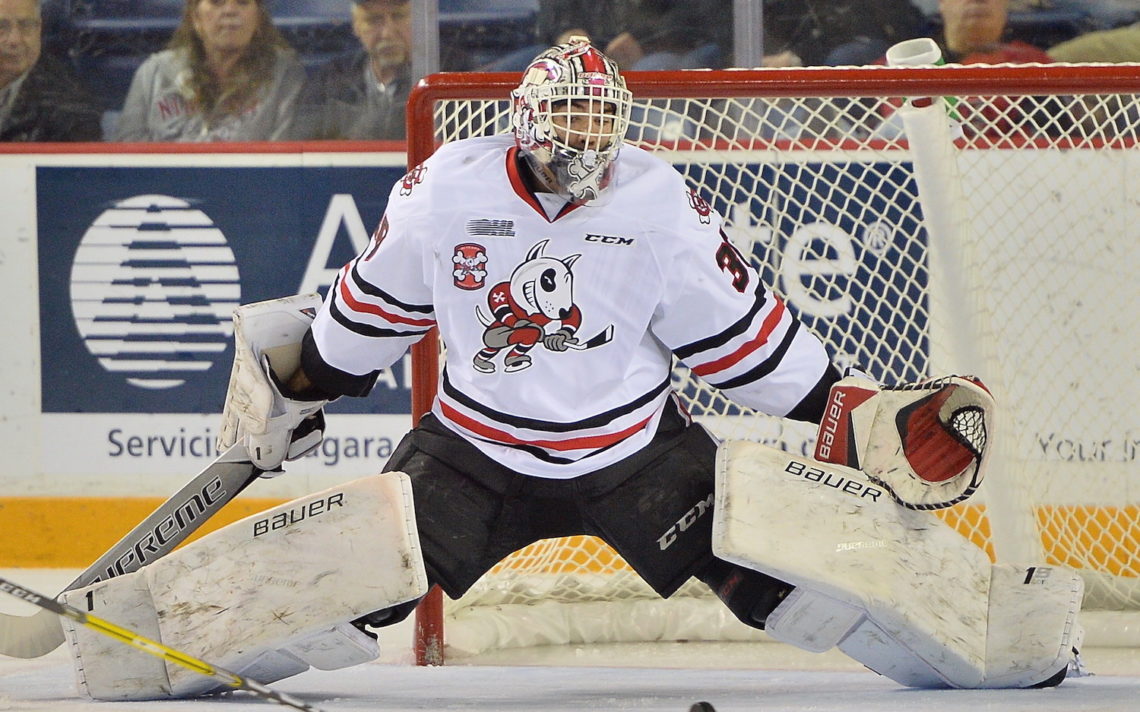 Stephen Dhillon made 39 saves to lead the visiting Niagara IceDogs to a 4-1 victory over the Hamilton Bulldogs Saturday night. Photo by: TERRY WILSON/OHL IMAGES

Backed by a sparkling 39-save performance by Stephen Dhillon and a goal and two helpers by Ben Jones, the visiting Dogs defeated the Hamilton Bulldogs 4-1.

“I knew going in I had zero (wins),” Burke said. “Selfishly, players want to score early and coaches want to get a win early because the longer it goes, the more the pressure builds and people talk about it.

“It’s one of many that I know we will win this year.”

A lot of what Burke believed about his team in the summer was on full display Saturday, namely the excellent goaltending of Dhillon and the wealth of team speed possessed by Niagara.

“Hamilton had no real answer for our forwards’ speed and Stephen Dhillon was an absolute rock,” he said.

Nowhere was Dhillon’s excellence more noticeable than the first 10 minutes of the first period.

“They definitely gave it to us, but Stevie calmed everything down and let all the guys get their legs under them,” Burke said.

He was also impressed with the fortitude his squad displayed.

“We have a high-character team,” Burke said. “Guys go in and they know they are going to get smoked to get the puck out. Guys are blocking shots and getting pucks deep in the third period when we switched over into the mode where we wanted to limit our turnovers.

“For guys who want to score goals and they’re thinking about the scouts, they bought in.”

With all the great things that happened, there is still plenty for the coaching staff to improve upon early in the season.

“Even if things hadn’t gone well for us tonight, we wouldn’t have hit the panic button,” Burke said. “There’s a lot of things to work on.”

“We got better in the third, but we could be even better in transition if we clean that up a bit. And you can always get better in your D zone play.”

On special teams, Niagara was solid on the penalty kill but failed to capitalize on a five-on-three power play.

Niagara will have plenty of time to clean things up with its next game being next Friday’s home opener against the Erie Otters. Burke doesn’t mind the extended time off early in the season.

“The OHL scheduling gods are going to be jamming a lot of games at us coming up,” he said. “We have two three-in-threes, (three games in three nights) the next two weekends, so we’re fortunate to have the slow start. The guys will have two days to rest up and rehydrate themselves.”

Niagara escaped Saturday’s game without any injuries except for the usual assortment of bumps and bruises that come with blocking shots and playing physical.

“There were a lot of ice packs on the bus,” he said.

No one is more excited than Burke for Niagara to play its home opener.

I’m glad we played our first game on the road because it was a little sloppy and some of the guys had some Game 1 jitters,” he said. “I’m glad we got those out and now we can focus on our game against Erie.”

Also contributing to Niagara’s offence Saturday were: Kirill Maksimov, Oliver Castleman and captain Johnny Corneil, goal and assist; and, Liam Ham, Philip Tomasino and Billy Constantinou, lone assists. Constantinou was +3 on the evening to top Niagara in the plus-minus category.

Hamilton out shot Niagara 40-37 in the game and Dhillon was named the game’s first star.